The Pizza Man Has Been Retired 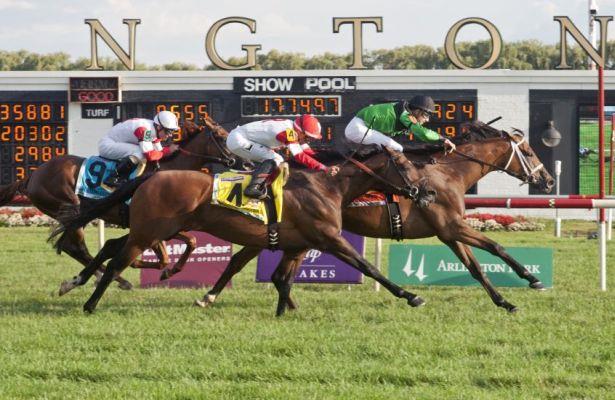 As we reported last Saturday in our Arlington Million recap, The Pizza Man has indeed been retired.

In the immediate aftermath of the Arlington Million, owner Richard Papiese of Midwest Thoroughbreds told me that he was likely done racing. On Sunday,  X-rays were taken of his left front ankle which had some swelling after the race. The results showed some chips which helped explain his uncharacteristic showing in the Million.

Over the next few days, Papiese discussed his options with trainer Roger Brueggemann, and his wife and partner in Midwest Throughbreds, Karen. They came to the conclusion that it was in the best interest of The Pizza Man to retire him from racing. "It's not like he couldn't run again, he could heal up again and run next year, but in his case that would be crazy as he is already eight," Papiese said. "He'll be headed back to the farm in Florida in the next week or so. Whatever the doctor says he needs he will get. Over the next year we will see how he likes jumping, or see if he wants to be a stable pony."

The eight-year-old gelding retires with a 36-17-3-3 record and $2,158,941 in earnings. Besides his 2015 Arlington Million win, the son of English Channel also counts the Grade 1 Northern Dancer at Woodbine last fall, and the Grade II Hollywood Turf Cup in 2015 among his career highlights.

The Pizza Man is stabled at Churchill Downs and will be picked up to be vanned down to Anthony, Florida in the coming week. "I think with his accomplishments, he is the best Illinois-bred ever," Papiese said.

I checked in on Work All Week to see see how he was doing and Papiese told me that he was recovering after a surgery saying, "Work All Week just had surgery a couple of days ago, we were worried that he had colic and they opened him up a little bit and nothing was twisted, but they found a little hole in his stomach lining and repaired it, and now he'll be fine moving forward."

Work All Week spends most of his year at the farm in Florida, then heads north to Belmont about a month before the Saratoga meet to serve as a stable pony through the end of the Saratoga meet before heading back to the farm. With The Pizza Man now headed down to Florida, Work All Week gets some added company to join him in retirement.

" Manila and the Arlington Million

" Cigar and the Pacific Classic

" Spending Time With Game on Dude

" Go For Wand: Gone But Not Forgotten