My 5 Breeders’ Cup races to be remembered 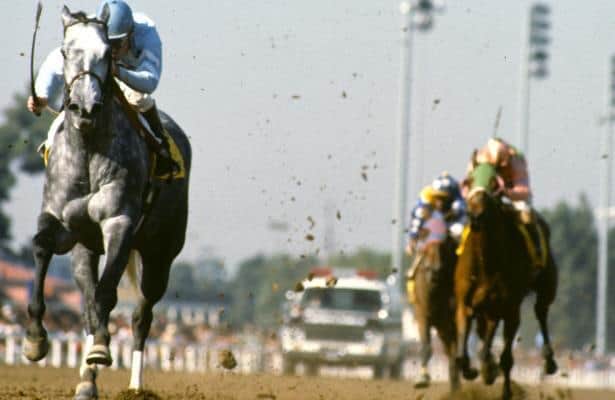 Every Breeders’ Cup race carries with it a story line, some becoming favorites for racing fans. For me, no matter how much time passes, some races stand out.

The races I look back on now may not be the most recognizable or memorable for some, but they are for me. It was difficult to narrow it to five, so I chose to go 2000 and earlier.

Without further ado, here are five Breeders’ Cup races I look back on in chronological order

We have been lucky to have seen many great females race in the last few years. But one of the best to ever win the Distaff is also one of the least talked about and remembered champions to have won a Breeders’ Cup race, Princess Rooney.

She was the first Breeders’ Cup winner voted into the Racing Hall of Fame and was a near champion at age 2 and 3, losing only once in 12 starts. The filly by Verbatim was sent to trainer Neil Drysdale in California for her 4-year-old campaign, when her wins included the Vanity and the Spinster. Her Breeders’ Cup Distaff was nothing short of spectacular as she won by seven and completed the 10-furlong distance 4/5 of a second faster than Wild Again, the winner of the Classic a few races later.

The Sprint used to be one of my favorite races, back when females ran against the males, making it one of the most anticipated races on the card.

This was supposed to be Groovy’s coronation. Groovy was unbeaten in six starts in 1987 and was widely considered to be one of the best sprinters to have come along in years. The females made their mark on this race, though, as it was two who took the race to Groovy early as Pine Tree Lane went to the front, with Groovy unable to keep up from the inside. Meanwhile, the 3-year-old filly Very Subtle was on the outside moving up from third ready to pounce, and as these three hit the far turn, Very Subtle took over and never looked back winning by four lengths in 1:08 4/5.

Groovy gamely held on for 2nd and rightfully still took home the Eclipse. Not many past or future Sprint winners would have beaten Very Subtle that day. It stands as one of, if not the best, Sprint performances in Breeders’ Cup history. For her career, Very Subtle won eight graded stakes including the Grade I Test. She finished 4th to Gulch in her attempt to repeat in 1988, and she raced into her 5-year-old season before she was retired. She compiled a record of 12 wins from 29 starts (29-12-6-4).

Many remember the 1988 Breeders’ Cup for races such as Personal Ensign’s Distaff, or Alysheba’s Classic win. Of course, I remember it for those great races, but I will also never forget Great Communicator’s unwavering courage in the stretch at Churchill Downs as he held off all comers for the win. Off at 12-1, he led from start to finish in this race holding off Sunshine Forever, Indian Skimmer, and Triptych in a dramatic stretch drive.

A former claimer, Great Communicator was a blue collar horse, and 1988 was his breakout season. The 5-year-old had mixed success earlier in his career with various graded stakes placings and even ran in the 1987 Turf when he finished 12th. In his first start in 1988, though, he turned the corner and started winning graded stakes. He was only off the board once in 1988, winning six of his eleven starts, three of which were Grade I events.

Great Communicator was trainer and part owner Thad Ackel’s pride and joy. Great Communicator won several stakes after his Breeders’ Cup win, including two Grade I events. Racing into his 7-year-old season, the gelding fractured his right hind leg at Santa Anita in November of 1990 and sadly had to be euthanized. Great Communicator’s memory will always live on with me as I have never forgotten the heart he showed on the racetrack.

The 1991 Classic had it all. Entered were defending champ and Kentucky Derby winner Unbridled, Preakness winner Summer Squall, Kentucky Derby winner Strike the Gold, and the 2-year-old champ from the previous season, Fly So Free. All told, 10 of the 11 horses entered were Grade I winners. The 1991 field was and still is one of the deepest in Classic history, and when the dust settled, it was Black Tie Affair who stole the show.

Black Tie Affair was a Breeders’ Cup veteran by 1991. In 1989 he tried the Sprint as a 3-year-old and finished 8th. In 1990 he tried the Sprint again and ran a very good 3rd to Safely Kept. Because of his Illinois connections, Black Tie Affair was based in the Midwest, and after his encouraging Sprint finish trainer Ernie Poulos decided to try and stretch him out to 10 furlongs for his last start in 1990, the Hawthorne Gold Cup. The experiment worked as the grey son of Miswaki showed that he could win going long.

On a five-race winning streak entering this race, Black Tie Affair never trailed at any point of call going wire to wire. This race was no different as Black Tie Affair won by 1 ¼ lengths over Twilight Agenda, defending champ Unbridled closed for third. Black Tie Affair was retired after this win and was awarded Horse of the Year in 1991. He won 18 of his 45 starts (45-18-9-6).

He entered stud in 1992, in Kentucky, and then was moved to Japan for several years. The best of Black Tie Affair’s progeny was multiple Grade I winner Formal Gold. He was pensioned in 2009 and moved to Old Friends Thoroughbred Retirement Facility in Kentucky, where he lived until the age 24 when he was euthanized in July of 2010 due to the effects of laminitis.


A 3-year-old U.S.-based colt who had raced six times, only two of which were on the grass, went off as the post time favorite. This is the story of War Chant.

A regally bred colt out of Danzig, War Chant’s mother was Hollywood Wildcat, who won the Breeders’ Cup Distaff seven years earlier. The goal from the beginning was the Kentucky Derby for the Neil Drysdale-trained War Chant. Unbeaten through three starts, War Chant was favored in the Santa Anita Derby and finished 2nd. Next up was the Kentucky Derby, but War Chant never got going that day, finishing 9th.

After a break of more than five months, War Chant resurfaced in the Oak Tree Mile for his grass debut that didn’t disappoint. War Chant closed from next to last to win going away. Afterward, Drysdale decided to send War Chant to Churchill Downs to try the Mile. It was a decision the Hall of Fame trainer didn’t regret, as War Chant, breaking from post 11, unleashed a breathtaking turn of foot – circling six wide leaving the quarter pole – to pass 11 horses in the stretch to win by a neck.

The sky was the limit for this superstar in the making as he found a home on the grass, but the breeding shed came much sooner than expected as the owners Irving and Marjorie Cowan made the agonizing decision to retire him, saying, “There comes a time when economics come into play and dictate the decision. He has a beautiful pedigree, and the demand for him was great."

War Chant won five of his seven career starts and initially stood in Kentucky, but was moved permanently to Australia in 2014, where he now resides at Yarradale Stud. War Chant has sired numerous quality runners such as 2010 Breeders’ Cup Turf Sprint winner Chamberlain Bridge.