Manila and the Arlington Million 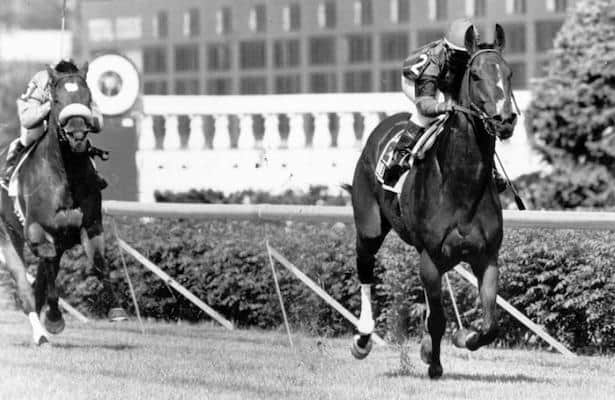 The Arlington Million in 1987 was only going on its seventh year, but already the race had cemented its place on the racing calendar. Thanks to the exploits of champions such as John Henry and Estrapade, the Million was the premier grass race in horse racing. Second only to the Breeders’ Cup Turf in importance on the racing calendar for the turf division, the 1987 edition was shaping up to be an all-star cast.

Back in 1987, the Million field was chosen by a seven-member international committee almost a month before the race. Some horses that were in that 14-horse selection included such names as Ferdinand, Triptych, Mtoto, Dance of Life, and of course, Manila.

For those not familiar with Manila, let me fill you in on his career up to his Million run. As a three-year-old, he won the Breeders’ Cup Turf over a star-studded field that included Theatrical, Estrapade, and the Arc De Triomphe winner Dancing Brave. Sent off as the 1-2 favorite, Dancing Brave was being compared with two of Europe's all-time great racehorses, Nijinsky II, and Mill Reef.

Manila, coming into the race on a 5 race win streak, was sent off at 9-1. Jockey Jose Santos, after seeing his rail path close in the stretch, steered Manila around Estrapade and Theatrical to storm down the center of course for a neck win. His effort earned him the Eclipse for Champion Grass Horse.

Manila continued his streak with three more wins in 1987, but in mid-August, in his final race before the Arlington Million, Manila was upset at Saratoga in the Grade 2 Bernard Baruch H., losing by a half-length. Trainer Leroy Jolley said after the race that the sweltering heat and the 12 pounds he had to give to the winner contributed to his defeat.

For Arlington Park, 1987 marked the first full meet since the fire that broke out in the morning hours of July 31, 1985. The fire eventually raged out of control and spread through the grandstand, destroying the facility. Later that summer, in front of 35,000 fans, the “Miracle Million” took place using tents and temporary bleachers. In 1986, Arlington Park conducted a 13-day International Festival of Racing in late August and early September. Weeks later, owner Richard Duchossois bought out partners Joseph F. Joyce, Sheldon Robbins, and Ralph Ross to take full control of Arlington and set his sights on the rebuild.

Under the leadership of Duchossois, Arlington was ready to break ground, but not before one last big day of racing. September 6th came, and it was Arlington Million day. Besides the aforementioned Manila, the race also drew Theatrical, who won the Breeders’ Cup Turf winner two months later. The rest of the field included Sharrood, Rivlia, Glaros, Forlitano, Spellbound, and Explosive Darling.

On a cool day with a threat of rain, the field of eight entered the gate for the Budweiser-Arlington Million as it was referred to then. Manila and Theatrical got off to the best start, but as the field passed the finish line for the first time, it was Forlitano in the lead, followed by Spellbound and Theatrical. Manila, under jockey Angel Cordero Jr., was in fourth, about 3 ½ lengths back.

Forlitano led the field down the backstretch to the half-mile pole. Theatrical, ridden by Pat Day, moved into second down the backstretch, Spellbound and Manila followed. At the three-eighths pole, Theatrical took over from Forlitano, with Manila moving to third and Spellbound dropping to fourth. Cordero shot Manila into the lead around the far turn to take charge, and he opened up four lengths on the rest of the field in the stretch. Theatrical was unable to hold off Sharrood for the place, as Sharrood closed to finished 1 1/2 lengths behind Manila. Explosive Darling, the gelding who was owned by Richard Duchossois, finished fourth.

With the win, Manila improved his record to 12 wins from 18 starts. He was 11 for 13 on the grass, with two seconds. This Million was to be Manila’s final race as he suffered a career ending injury only a few weeks later. It was especially crushing because the connections of Manila were seriously considering shipping Manila to France to take on the best Europe had to offer in the Arc De Triomphe that fall.

By Lyphard, Manila was owned by Bradley M. Shannon. Although he reached great heights in his career, his career ending injury was a bitter pill to swallow. It’s no exaggeration to say that Manila was arguably the greatest grass horse that has ever raced on U.S soil. I consider Manila to be the greatest male grass horse that has ever raced in the United States. Don’t take my word for it, Hall of Fame trainer LeRoy Jolley said, "Manila was by far the best horse I ever trained." Jockey Angel Cordero Jr. said, "Manila is the best grass horse I ever rode and he’s probably the best horse around going anywhere from a mile to two miles. If my life depended on riding two horses, I’d pick Seattle Slew and him."

Manila was the best grass horse of 1987, but ultimately lost out on his second straight Eclipse to Breeders' Cup Turf winner Theatrical. He also should have been a first year of eligibility Hall of Fame entry, but his connections had to wait till 2008. He entered stud at Lane’s End in 1988 before being relocated to Turkey in 1996. He sired 32 stakes winners, including Grade 1 turf winner Bien Bien. Manila died in Turkey on Feb. 28, 2009 at the age of 26.

The day after Manila’s electrifying win, the rebuild of Arlington commenced as soon as the last horses crossed the finish line that Labor Day. Demolition equipment was ready to remove the temporary grandstand to begin the process of building the new structure that stands today. Arlington Park re-opened on June 28, 1989, with a new name, Arlington International Racecourse. Arlington is celebrating its 90th year this year.