Kentucky Derby 2016 - Why it’s Nyquist and Then Everyone Else 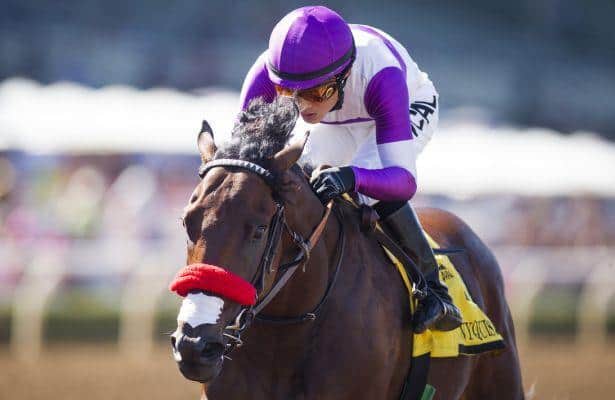 Photo: Alex Evers/Eclipse Sportswire
Think about this, what if I were to tell you one year ago today that we would have a horse go postward in the 2016 Kentucky Derby who:

-    Is an unbeaten California-based horse, the reigning two-year-old champ with a Kentucky Derby and Preakness winning trainer and jockey, but is even better at age three.
-    Was the first two-year-old in 40 years to have three grade one wins and go unbeaten, the last being Foolish Pleasure.
-    Has almost as many grade one wins (4) as the rest (6) of the Kentucky Derby field combined.
-    Showing mostly speed early in his career, he shipped east to Keeneland for the Breeders’ Cup Juvenile and inexplicably wasn’t the favorite or even the second choice despite towering over the field with a four for four record and the same grade one juvenile wins as American Pharoah. He won of course, but the way he won showed this wasn’t an ordinary horse. He had to overcome adversity - being bumped and coming from off the pace, showing a tremendous will to win.
-    In his first start at age three he won the seven-furlong G2 San Vicente in 1:20 3/5, beating one of the eventual top four betting choices for this Derby.
-    In his second start at age three, he shipped cross country to Florida to take on the presumed Kentucky Derby favorite on his home track in the G1 Florida Derby. Again he wasn’t the favorite but it was no contest, our unbeaten horse won by open lengths again showing an innate toughness about him.
-    He may go off at odds of 5-2 or 3-1 on Derby Day

You would think okay, why isn't he 4-5 or even money? After all, he has more credentials than even American Pharoah did, and must be the most talked about horse in the country.
Well, we live in a different world now and Nyquist just doesn’t get the respect I feel he deserves. He won’t be 4-5, more like 5-2 or 3-1. I don’t know about you, but if ever 3-1 or 5-2 on a horse is a gift, this is the time. Yes, even in this 20 horse field where half are just there because it’s the Kentucky Derby. The simple facts are that he towers over the field in every category.
Some will say he hasn’t run fast speed figures, I disagree. I believe the figures he has been assigned, especially this year, are not correct. In his first start this year, the San Vicente, he was assigned a BRIS figure of 103 and a Beyer of 100. The 8.5-furlong dirt race run before Nyquist’s win went 1:42.45, the 5.5-furlong race after went in 1:04.32. Both of these races were run right before and right after Nyquist’s win. Nyquist ran his 7-furlongs in 1:20.71, under a second off of the track record. Worst case I have his figure in the 105-108 range. I believe the quality of his first start this year was grossly undervalued.
In his second start this year the subjectivity gets much worse. Nyquist beat the presumed Derby favorite in Mohaymen and was assigned a BRIS figure of 97 and a Beyer figure of 94. I find the Beyer figure assigned just flat out bizarre. The 7-furlong stakes race was the last dirt race run before the Florida Derby, it was won in 1:22.96. There was no dirt race after the Florida Derby which was run in 1:49.11. Why does this matter? Because it rained on and off Florida Derby day and the track was first sloppy and then was upgraded to good, in other words, it was drying out. That 7-furlong stakes race, the last dirt race before Nyquist, was run 148 minutes BEFORE the Florida Derby. I believe the race Nyquist ran was on par with his first of the year. I also believe Mohaymen ran back to his career best, around a 95 Beyer. Worst case, I have Nyquist’s figure in the same 105-108 range.

Some pundits will point to his pedigree as his potential Derby downfall. I couldn’t disagree more. In fact, I believe he will relish the extra distance. His sire Uncle Mo simply never had a chance to show his affinity for going longer. He was given one chance, the 2011 Breeders’ Cup Classic. He was prominent throughout that race, did fade in the stretch, but lost the race by only 6 lengths. This after having just two races in 6 months entering that Classic, a sprint, and a one-turn mile. His prep was the same Kelso Handicap that Honor Code used last year except Honor Code was beaten by more in his Classic so is it safe to assume Honor Code had distance issues? No.

The Doug O'Neill trained Nyquist has shown he can win no matter the circumstance, something no other horse has shown in this race. The track isn’t a concern because he doesn’t care. He just gets the job done, winning over four different racetrack surfaces from coast to coast. He loves his job as a racehorse, is all business, and absolutely hates to lose. In the Florida Derby after he righted himself in late stretch, he took off again at the wire. They could have gone around again and no one was passing him.

For once, the Kentucky Derby picture looks very clear to me. It’s Nyquist on top. As for the others, give me Gun Runner, Mor Spirit, and Exaggerator. Strap yourselves in, because if Nyquist can win this Derby, we're going on another exciting five-week ride to New York courtesy of another superstar, Nyquist.

You can go here to listen to a one on one interview I did with the trainer of Nyquist, Doug O'Neill. We discuss Nyquist's career and his upcoming run in this week's Kentucky Derby