Go For Wand - Gone But Not Forgotten 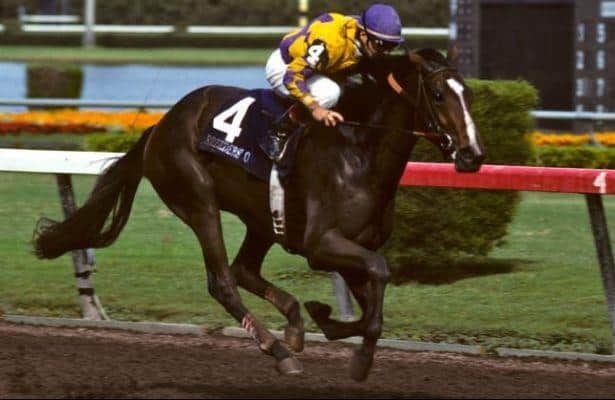 October 27th, 1990. For some, that’s just another date in the calendar, but for me, the date is seared in to my memory. October 27th, 1990 was the date of the seventh Breeders’ Cup, and the most anticipated race on the card, and of the year, was not the Classic, it was the Distaff.

I was a clear and crisp day, 43 degrees and 51,236 packed in to Belmont Park, millions more were watching on NBC. The race was billed as a showdown between two of the greatest female horses of our time, the brilliant three-year-old filly Go For Wand, and the equally brilliant Bayakoa, who was also the defending Champion. I have never looked more forward to a race. The numbers don’t lie, twenty Grade 1 wins between these two.

A homebred daughter of Deputy Minister – Obeah, who was trained by Billy Badgett Jr, Go For Wand was marked for greatness from the start. After winning an allowance by 18 lengths, she went straight to the Grade 1 Frizette where she closed to lose by a half-length to the very formidable Stella Madrid. Gulfstream Park and the Breeders’ Cup Juvenile Fillies was next, and she ran a powerful race under her regular rider Randy Romero to win convincingly by almost 3 lengths over that same rival. She would be beaten only once more in her career, a second place finish over a muddy track in the Kentucky Oaks.

Going into the Distaff, Go For Wand was on a five race winning streak, all of them Grade 1 victories. Sure, she dominated her opponents, but what made this streak stand out from others before or since was the mixture of distances and times. She won the Grade 1 Test in 1:21 and came back nine days later to win the Grade 1 Alabama by seven lengths in 2:00 4/5. Three weeks later she defeated older in the Grade 1 Maskette, and then her tour de force Grade 1 Beldame win in 1:45 4/5. Yes, Go For Wand was that dominant.

Bayakoa, on the other hand, came from humble beginnings. The daughter of Consultants Bid – Arlucea (ARG) started her career in Argentina, but came to the United States in 1988 where her career thrived with trainer Ron McAnally. A winner of 13 Grade 1 races, she was based on the West Coast, but she was not your typical California based horse. She took her act on the road several times taking major Grade 1 races in Florida, New York, Kentucky, and Arkansas. Half a dozen of her Grade 1 wins were outside of California.

Her win in the 1989 Breeders Cup Distaff was against arguably the best field in that race's history before or since. Her regular rider Laffit Pincay Jr. stated she was the best filly he has ever ridden, and even Chris McCarron, after subbing for an injured Pincay, said she was the best filly he has ever ridden. Bayakoa was the defending champion of the Distaff, her legacy already cemented, and this 1990 Distaff was to be Bayakoa’s final win. She died in 1997 and was inducted in to the Hall of Fame in 1998, two years after Go For Wand was inducted. She will always be associated with Go For Wand because of this race, but her record stands alone as one of the best of all time.

I am sure many of us have tried to forget the actual race. I know it took a great emotional toll on me, and to anyone watching in person or on television it had to have affected you one way or another. Tom Durkin said the toughest race he ever had to call was the race after that Distaff. Many people choose to deal with tragedy and pain in different ways. For this, I chose to look back on how these horses touched me, their accomplishments on the racetrack, and lastly, the What If.

I know I can’t be the only one to have thought this, but there is no doubt in mind that had that race finished without incident, we would be talking about perhaps the greatest horse race of all time. These two were head and head for 7 furlongs and neither were giving an inch. I have no idea who would have won, I won’t speculate, that’s not what this is about. As Tom Durkin said “A Clash of Champions midway around the far turn”. It was that great of a race between one of the best older mares of all time and one of the best three-year-old fillies of all time.