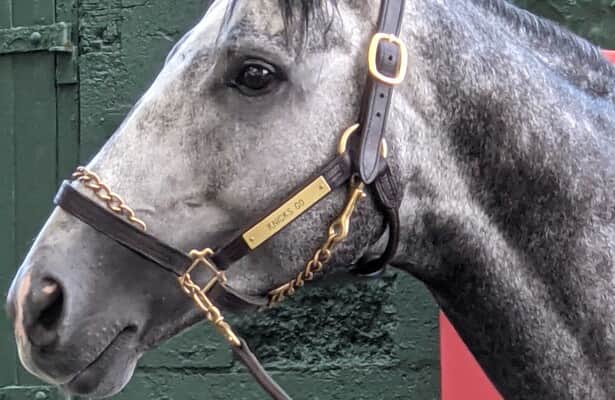 We'll know sometime next week who's officially up for the 2021 Eclipse Awards, with finalists determined in each category by voters’ top three selections, using a 10-5-1 point basis. The winners, however, are determined solely by first-place votes.

As my most loyal readers know, I take my responsibility as an Eclipse Award voter very seriously, following each division closely throughout the  season, weighing the accomplishments of all.

I finalized my selections and submitted them once the final Grade 1 events of the year were run last Sunday at Santa Anita Park.

Below are some brief thoughts on each equine division, and my votes. I can answer any questions in the comments section below. There are some horses I left out, and would be more than willing to explain why I did.

Breeders' Cup Juvenile Fillies winner Echo Zulu will be the deserving winner of this Eclipse as she was dominant in all four of starts winning by a combined 22 lengths. It is rare nowadays to see a 2-year-old win three Grade 1 events.

JuJu's Map finished runner-up to Echo Zulu in the Breeders' Cup and was a facile winner of the Alcibiades (G1) the race prior. Clear No. 2 for me.

The No. 3 could have went so many different ways. I went with Ain't Easy, the winner of the Chandelier (G2), who won both of her starts rather easily. I gave some thought on including Breeders' Cup Juvenile Fillies Turf winner Pizza Bianca, but that was her only stakes win and I was more impressed with Ain't Easy.

Corniche won the Breeders' Cup Juvenile to cap off a 3-for-3 season. Two of his wins were Grade 1 events, and while he certainly should be voted the Eclipse, I have sort of a hollow feeling with this division because several other highly regarded horses missed the Breeders' Cup for one reason or another.

Jack Christopher was one of the horses who missed the Breeders' Cup, but he was sensational in his only two starts. His win in the Grade 1 Champagne was outstanding, and he would have been favored in the Breeders' Cup.

Rattle N Roll also skipped the Breeders' Cup. He was an easy winner of the Breeders' Futurity (G1) after breaking his maiden only 16 days prior.

This decision was clear for me.

Medina Spirit gets my vote for the Eclipse. Essential Quality will be No. 2 on my ballot.

Only two horses occupied the No. 1 spot here in this division this season, Medina Spirit and Essential Quality.

Malathaat did more than enough to earn this Eclipse, despite running only five times. She made those five starts count winning three Grade 1 races, and finishing a close second (CCA Oaks) and third (Breeders' Cup Distaff) in two other Grade 1 events.

Clairiere started her season off in early February and ran eight times in 2021. She was present in most of the major races this division had to offer posting a 2-2-2 record. She ran one of her best races of the season when a close fourth, beaten less than a length, in the Breeders' Cup Distaff. Previous to that she won the Grade 1 Cotillion.

Search Results was right on the heels of Malathaat for this Eclipse halfway through the season, posting four wins in five starts, the only loss being that neck defeat to her rival in the Kentucky Oaks. After the Oaks she won the Grade 1 Acorn. She only ran one more time on the season because of injury, a third place finish sprinting in the Test at Saratoga. She is a deserving No. 3.

There were four horses who held the top spot here in this division in 2021, Vequist, Travel Column, Clairiere, and Malathaat.

This one is a slam dunk. Knicks Go started his season in late January winning the Pegasus World Cup and ended his season last month winning the Breeders' Cup Classic. In-between he won three other graded stakes, including the Whitney (G1) at Saratoga defeating the other two I have on this ballot.  Should be close to a unanimous choice in this division.

Maxfield certainly had a fine season as he placed in all seven of his starts, winning four. He bagged his first Grade 1 of the season in his final career start, last months Clark at Churchill Downs.

All told, there were four horses who occupied my No. 1 spot at various times this season, Knicks Go, Charlatan, Mystic Guide, and Silver State.

Another easy choice as Letruska should also be a near unanimous winner of this Eclipse. A winner of six graded races, four of which were Grade 1, Letruska won over six different racetracks. Letruska started her season in January and ran eight times in 2021, posting a 6-1-0 record.

Shedaresthedevil is the clear No. 2 for me here as she won four graded stakes, two of which were Grade 1.  Shedaresthedevil ran six times in 2021 posting a 4-0-1 record.

I had to fill out the No. 3 spot and to be honest, there wasn't a truly deserving choice but the spot has to be filled. Sprinters have their own divisional Eclipse so I won't place Gamine or Ce Ce here. I opted to go with Bonny South for a few reasons. I can forgive her last loss, a runner-up finish in the slop as the favorite. But previous to that she finished behind Letruska three times, placing all three times, and defeated Royal Flag both times they met. So Bonny South is No. 3 on my ballot.

Only two horses held the No. 1 spot here this season, Monomoy Girl and Letruska.

This decision came down to the final week of the racing season for me. Dr. Schivel held a slight edge over Jackie's Warrior because of his head to head win over his rival, his Grade 1 win over older males, and his narrow nose loss in the Breeders' Cup Sprint where Jackie's Warrior failed to fire finishing sixth, beaten a little over four lengths.

But Dr. Schivel's connections decided to try and nail this Eclipse down with a start in the recent Malibu Stakes (G1). It was a bold move, and with it carried risk too. Unfortunately Dr. Schivel simply didn't have it finishing last of seven, beaten nearly 20 lengths.

So it boils down to this, Jackie's Warrior and Dr. Schivel each had one subpar race for one reason or another. Jackie's Warrior has a marquee win in what was very likely the best race of the year, defeating Life is Good in the Jerkens Memorial (G1) at Saratoga. Jackie's Warrior won four graded stakes. No, he didn't defeat older in a race because he didn't face older until the Breeders' Cup, but I think most will agree that the 3-year-old sprinters were far superior to the older in this division this season.

The No. 3 spot is interesting, and I went with Flightline. His Malibu win was a Grade 1 and he did defeat Dr. Schivel. And I can't ignore the weight of the win in terms of how he did it. He has run in only one stakes race this season, but I still placed him here over Aloha West who also only had one stakes win.

This one was decided for me well before the Breeders' Cup Filly & Mare Sprint. Gamine had the Eclipse wrapped up as far as I was concerned because of her 4-for-4 record prior to the BC that included two Grade 1 wins. She beat the best in her division in both of those Grade 1 wins, the Derby City Distaff at Churchill and the Ballerina at Saratoga, defeating Ce Ce, among others, in the latter.

Ce Ce did defeat Gamine in the Breeders' Cup Filly & Mare Sprint, but it was too little and too late for this Eclipse. Ce Ce won two other graded stakes on the season, the Grade 3 Chillingworth at Santa Anita and the Grade 2 Princess Rooney at Gulfstream.

Bella Sofia is No. 3 on my ballot, but this spot could have went to a few other deserving members of this division. Bella Sofia's big win was the Grade 1 Test against fellow 3yo fillies. She pressed Gamine in the aforementioned Breeders' Cup Filly & Mare Sprint and faded to fourth.

This division could have went many ways with several horses that could have been placed in these three spots. Domestic Spending was scratched out of the Breeders' Cup and even though his resume is light with only three starts on the season, he does have two Grade 1 wins, which ties for the most in the division.

Smooth Like Strait had an outstanding season. He only won one time from seven starts but all of his losses were narrow losses. He faced Domestic Spending and Colonel Liam in that Turf Classic and was third, beaten only a neck. He was a close runner-up in the Breeders' Cup Mile, losing by a half-length. In his seven starts he posted a 1-5-1 record.

I went with War Like Goddess here, she had an outstanding season. Although she was narrowly beaten in the Breeders' Cup Filly & Mare Turf, she did enough this season, winning four graded stakes, one of which was a Grade 1. She was the best U.S. based female turf horse in 2021. In six starts she had a 4-0-1 record

Althiqa held the No. 1 spot for a few weeks earlier this season after back-to-back Grade 1 wins. She is No. 2 on my ballot after season that started in Dubai and finished stateside with her last three starts. She posted a 3-0-1 record in  five starts.

The No. 3 spot was a tough one, and I could have went several directions. I chose Santa Barbara based in large part because of her two Grade 1 wins in this country, one of which came over older in Arlington's Beverly D (G1).

There were a total of four horses who were No. 1 at some point this season here, Mean Mary, Juliet Foxtrot, Althiqa, and War Like Goddess.

Horse of the Year

Breeders' Cup Classic winner Knicks Go will win this award in a landslide, the other two spots had to be filled out so I went with Letruska and Medina Spirit. Letruska was in the Horse of the Year race until the Breeders' Cup, and won the most Grade 1 events of any horse this season (4) so she is my No.2, and Medina Spirit gets the nod at No. 3.

Knicks Go won five of his seven starts, his only two losses coming around one turn. His five wins were over five different racetracks in five different states too.