Division Rankings: Knicks Go is in familiar spot to start 2022 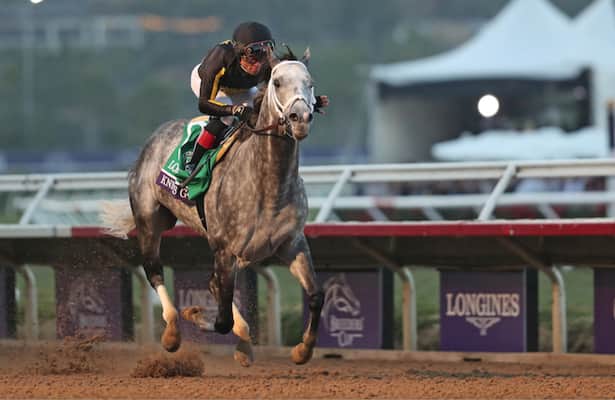 One year ago, Knicks Go started the season as the No. 1 ranked older dirt male in these rankings. Although he fell from No. 1 for several weeks in the middle of the season, he regained the top spot in late summer and held it for the rest of the season thanks to his facile Breeders' Cup Classic win.

Knicks Go is back, but he might be headed for the breeding shed after only one or two starts. He again will start a new season on top, and as the likely 2021 Horse of the Year, the upcoming Pegasus World Cup (G1) could be a passing of the torch to Breeders' Cup Dirt Mile winner Life is Good, who is slated to run as well.

The matchup between the reigning Breeders' Cup Classic and Breeders' Cup Dirt Mile winners happened once before in the Pegasus when City of Light defeated Accelerate in the 2019 renewal.

This early in the season, these rankings are very fluid. If if you don't see a horse you think should be ranked, please comment below and I will evaluate prior to next week's edition.

I know I can speak for all fans in stating that I wish all in this sport, horses and humans, a safe 2022.

With that, here are the updated rankings to start off 2022.

1. Knicks Go. Breeders' Cup Classic winner will be voted the 2021 Horse of the Year, and it is well deserved. He should be favored over Life is Good in the Pegasus, which is shaping up to be a fascinating race.

2. Life is Good. The Breeders' Cup Dirt Mile winner will try nine furlongs for the first time in the Pegasus. I don't expect it to be a big obstacle, but do believe nine furlongs will be his limit. A big threat to Knicks Go.

3. Hot Rod Charlie. Disappointed in his final start of 2021, a nose loss in the San Antonio (G2). Started eight times in 2021, five times in a Grade 1, and ran his heart out each time. Will be a major player again this season.

4. Mystic Guide. Ran only three times in 2021, but his Dubai World Cup win was outstanding. Back in training and will point for a comeback race at either Oaklawn or Fair Grounds and then head back to Dubai to try to defend his title.

5. Mandaloun. The Kentucky Derby runner-up from last season also won the Haskell via a DQ. I might have him ranked a bit too high here, but we will find out soon enough. Will take on Midnight Bourbon in next week's Louisiana Stakes (G3) at Fair Grounds.

1. Letruska. Despite her off-the-board finish in the Breeders' Cup Distaff, she was clearly the best in this division in 2021. Will win the Eclipse and be back this season. Look for her to start her season during the Oaklawn meet.

2. Shedaresthedevil. She too will be back this season, and she deserves this spot based off of her record in 2021.

3. Malathaat. Nearly pulled off the Breeders' Cup Distaff win, losing by less than a length when finishing in third. The Kentucky Oaks and Alabama (G1) winner from last season will be back in 2022.

4. Clairiere. Ran a very nice race against a tough field in the Breeders' Cup Distaff, where it briefly looked like she would win. Instead, she settled for a close fourth, 3/4 of a length from the winner. Will be back this season.

5. Bonny South. Was simply second best in the Fall City (G2) last time out, losing to Envoutante in the slop. Previous to that she was runner-up in two straight Grade 1 events, the Spinster and the Personal Ensign. Her lone win in 2021 came in the Doubledogdare (G3) at Churchill Downs.

1. Corniche. The Breeders' Cup Juvenile winner will start the season on top here, but unlike last season with Essential Quality, I don't have the confidence he will be at the top of this division for long. Unbeaten in three career starts.
2. Jack Christopher. Had to scratch out of the Breeders' Cup, but previously he won the Champagne (G1) in dominant fashion. He is 2-for-2 on his career. Just returned to trainer Chad Brown's barn after getting about 60 days off to recover from a minor shin ailment. He likely will drop from this spot in the coming weeks with no race in his immediate future and the Kentucky Derby in doubt.
3. Rattle N Roll. Impressive winner of the Breeders' Futurity (G1) last fall, he skipped the Breeders' Cup.
4. Smile Happy. Impressive winner of the Kentucky Jockey Club (G2) last fall, he is unbeaten in two starts. Do I think he will handle the longer distances as well as some others ranked here? No.

5. Pappacap. Runner-up to Corniche in this last two starts, he has to be ranked here just based on that.
Next 5: Zandon, Mo Donegal, Slow Down Andy, Newgrange, Major General.
3-year-old females

1. Echo Zulu. She was dominant in the Breeders' Cup Juvenile Fillies, winning by more than five lengths. Completed a 4-for-4 season with three Grade 1 wins, a rarity for 2-year-olds nowadays. Forget the Kentucky Derby talk, we need to see if she returns this season with similar form; remember Vequist from a year ago? Will start her 2022 season at the Fair Grounds.
2. Juju's Map. Ran well in the Breeders' Cup but was second best to Echo Zulu. Previously she was the winner of the Alcibiades (G1) as the favorite at Keeneland after breaking her maiden at Ellis Park.
3. Ain't Easy. Facile winner of the Chandelier (G2) at Santa Anita, she is 2-for-2 in her career but skipped the Breeders' Cup and had ankle surgery. Should be back in a month or so.
4. Tarabi. Three starts for this gal, and she has placed in each. She was second to Echo Zulu in the Spinaway (G1) over the summer and finished third to that rival in the Breeders' Cup Juvenile Fillies.
5. Hidden Connection. Disappointed in the Breeders' Cup, finishing fourth. The Midwest star previously had won both her starts, the Pocahontas Stakes (G3) being her last.
Next 5: Eda, Under the Stars, Gerrymander, Dance to the Music, Happy Soul.

1. Domestic Spending. Had to scratch out of the Breeders' Cup because of injury but likely will still win the Eclipse in this division. Will be back this season with hopes that he runs more than the three times we saw him in 2021.

2. Smooth Like Strait. It was this guy who ran the best of the U.S.-based grass horses in the two major Breeders' Cup grass races last fall. His runner-up finish in the Breeders' Cup Mile summed up his entire season – tough as nails and always runs his race. Will be back this season.

3. Colonel Liam. Like Domestic Spending, this guy also has two Grade 1 wins on his resume in 2021. He won the Pegasus World Cup Turf last season and will seek a repeat in that event in two weeks.

4. Golden Pal. It has been a long time since I ranked a turf sprinter this high, but he deserves it. He ran only four times in 2021, winning three of them. But his Breeders' Cup Turf Sprint was a thing of beauty, dominating from start to finish to post an easy win.

5. Hit the Road. This guy was very good last season, winning a Grade 1 and knocking heads with Smooth Like Strait in a few races. I might have him ranked high here, but I feel like he is in the top tier of this division.

1. War Like Goddess. Tough-luck loser of the Breeders' Cup Filly & Mare Turf, she is still tops in this division. A winner of four graded stakes in 2021, including the Flower Bowl (G1) at Belmont Park. The clear leader of this division heading into this season.

2. Going Global. Won six graded stakes last season as a 3-year-old filly. Hasn't left her home state of California since arriving in this country in late 2020 but will have to if she aims to contend for an Eclipse this season

3. Shantisara. Winner of three stakes in a row – and her last, the Queen Elizabeth (G1) at Keeneland, was a powerhouse performance where she won by five. Trainer Chad Brown might have himself another star.

4. Regal Glory. Won the Matriarch (G1) last out, beating Princess Grace. Might run in the Pegasus Filly and Mare Turf.

5. Princess Grace. Was on a four-race winning streak, all graded stakes. But in her last two, she was third to Going Global in the Goldikova (G2) and third to Regal Glory in the Matriarch last out. Close for this spot, with Zofelle right behind.

1. Jackie's Warrior. The likely Eclipse winner from last season, this guy ran a full schedule and ran hard every time. Didn't fire his best shot in the Breeders' Cup, but to be fair, long season and cross-country trip probably had something to do with that. He deserves this spot over all others, including Flightline, for now.

2. Flightline. Super impressive in his Malibu win, defeating Dr. Schivel among others. Still, he has only one stakes start and doesn't seem capable of running a full schedule given his three career starts spanned eight months. His connections have stated he will run only four times in 2022 if he stays healthy. His next start won't come until the spring, with the Met Mile (G1) on Belmont day their major target for the first half of the season. Still lots of questions to be answered by this son of Tapit.

4. Aloha West. The Breeders' Cup Sprint winner closed stoutly in the stretch to win by a nose. Still, the Breeders' Cup was his first graded-stakes win. He has to show me a lot more to move up here.

5. Following Sea. Ran well last out in the Cigar Mile (G1) finishing runner-up to Americanrevolution. Prior to that, the Vosburgh (G2) winner ran very well in the Breeders' Cup Sprint, finishing third.