These Eight are Nothing Short of Elite 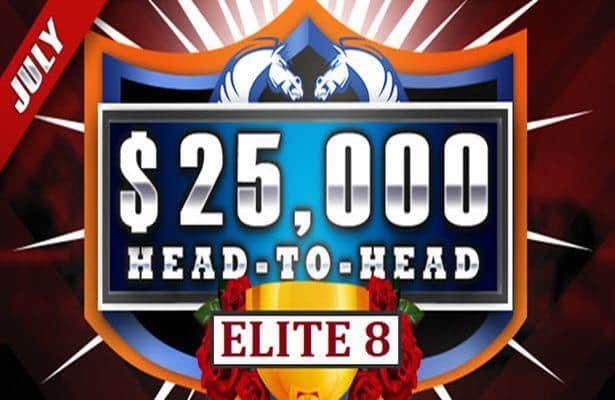 Sixty-four players have laid it all out on the line while chasing the $10,000 first place prize in the DerbyWars July $25,000 Head to Head Championship. A few players have had to get downright scrappy, while others have absolutely left their competition in the dust. The road was far from easy, but now it’s anyone’s game as a handful of players have asserted themselves as the July Elite Eight.

With the Elite Eight assuring everyone $1,250, the remaining players have cracked the vault and the focus shifts straight to the $10,000 prize along with the title of July Head to Head Champion. With eight strong players, each as deserving as the other, the race is wide open. Let’s meet the Elite Eight.

After rolling through the top seed in the bracket “wire2wire” in the Round of 64, Kingsolver took it to $100,000 Game Champion "sophia" Barbara Bowley 51.30 - 0. In his Sweet 16 match, Kingsolver put points on the board with Paid Up Subscriber in the 7th race from Saratoga and played catch me if you can against “wacokid”. When Billy Fryer “wacokid” couldn’t answer the call, Kingsolver was bound to the Elite Eight.

In the Round of 64, Calabrese went toe-to-toe with head to head warrior “bet4thinknomore”. He would have to sweat it out late, but would eventually make it to the Round of 32 narrowly. Calabrese’s next match was another nail biter, as he needed a strong rally to put away Dave Montanaro “lasttofirst”. For the first time in the tournament, Calabrese had some sort of breathing room late against Robert Flaska “pugsley”. He reaches the Elite Eight with the task of slaying the tournament’s giant slayer.

The owner of the tournament’s most scintillating performance, Marlaire has rolled right past his competition. After a hand ride in the Round of 64 and Round of 32, he made Brian “thebid” Lauzurica’s normally incredible total of $88.00 look silly. Marlaire put up a ridiculous $156.40. While he was cantering home in the Head to Head Championship, Marlaire finished second in the Saturday $25,000 Game. It is easy to see he means business and is by far the most dominant player of the tournament going into the Elite Eight.

If the Sweet 16 was any prequel to the Elite Eight, we are in for an absolute show. Lazarus has done his best to show Marlaire that he won’t go down without a fight. Lazarus used the first two rounds as a springboard to take down a hot “mayor5” Mike Guinan, and did so rather convincingly. With his $70.10 Sweet 16 margin of victory, Lazarus conveyed his role as a brick wall in Marlaire’s Championship road.

There aren’t many words needed to describe “taytay” other than he is downright good. Jim fought off a tenatious “dueler9” Greg Dueler in the Round of 64 and made sure “badkenny” never had a shot in the Round of 32. He silenced “jacckk8” Jack Merola’s hopes of reaching the Elite Eight with a 40.90 - 8.70 victory. Jim T won’t go quietly and everyone knows it.

“flannymn” - Dan Flanigan - After crushing the competition in the Round of 64, Flanigan had to grind out his Round of 32 match against “skibasher” Garret Skiba. He did just that and cooled off “kingsdunes” Bo Pommier, who was really heating up going into the Sweet 16. When Pommier drew nine blanks in a row, Flanigan had safely reached the Elite Eight and the guaranteed payout along with it. Hopefully he has something good in his arsenal for the next match. Jim T will certainly make sure he needs it.

“flannymn” - Dan Flanigan
After crushing the competition in the Round of 64, Flanigan had to grind out his Round of 32 match against “skibasher” Garret Skiba. He did just that and cooled off “kingsdunes” Bo Pommier, who was really heating up going into the Sweet 16. When Pommier drew nine blanks in a row, Flanigan had safely reached the Elite Eight and the guaranteed payout along with it. Hopefully he has something good in his arsenal for the next match. Jim T will certainly make sure he needs it.

The name seems fitting for Pettit, as he blew right through the first two rounds, despite facing arguably the toughest draw in the tournament. In Pettit’s Round of 64 match, he let “youare2020” Anthony Trezza know he wouldn’t get a shot to repeat as the Head to Head Champion. “Sulemark” Ted Hanna was waiting for him. Hanna was the most hyped player in the tournament, having won the Saturday $20,000 Game and the Sunday $5,000 in less than 24 hours. Pettit wasn’t buying the hype and disposed Hanna’s title dreams with a 79.20 - 17.40 victory. The Sweet 16 match against “johnnyk” turned out to be a nail-biter, but Pettit has now established himself as a fearless competitor in the Elite Eight.

After posting an $87.00 total in the Round of 64, Williams was dead in the water in the Round of 32. He would square off with “benz42086” Robert Reidy. In the final race of the match, he would need Husband’s Folly to come through at Del Mar. A couple tense minutes passed and Williams’ horse pulled through sending him through to the Sweet 16. When “moskeet” Skeeter Saska couldn’t mount a charge, Williams locked in his spot. Reaching the Elite Eight was a tough task, and facing Joe Pettit doesn’t make Williams’ next task any easier.

Play in Games are Running now for the