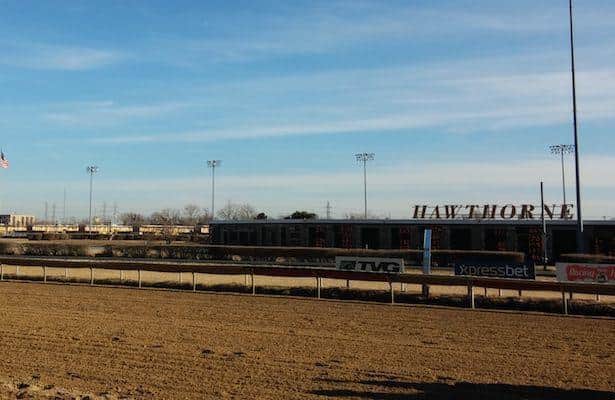 Once again, welcome to the Chicago Contest Corner!  Whether you are looking for Promising Prices or Sure Survivors, this is the place to find the week’s most useful contest plays for DerbyWars contests on the Chicago circuit.

This week’s Hawthorne contests run on Friday, April 22, so all of the horses featured this week are racing that day.

Race 4: Salutethehero - Silky Sami should win this race on paper.  However, as her name would suggest, she is a stone closer.  This race does not look like it has enough front-end fireworks to make her attractive at a short price.  Thus, it is ripe for finding overlays elsewhere.  Salutethehero takes a step forward in class after winning a bit weaker last out.  That came at five and a half furlongs, but she has been fine at six: two wins and eight more money finishes in 24 main-track tries.  She has done her best work at Hawthorne, with four of her seven wins coming there, and eight of her thirteen other money finishes coming over the track.  On running style, she has shown some versatility.  Last out she rallied from well off the pace; in other starts, she has made good account of herself stalking more closely.  From a human perspective, it is interesting that Santo Sanjur shows up on her and not Silky Sami; he was the putative favourite’s regular rider last fall, and hit the board in all four starts with her during that meet.  If Salutethehero runs back to her last, she contends here, and she will be a long enough price to bet that she can do that.

Race 7: Elizabeth’s Fever - This race is as salty as they come.  Somali Byrd and A Shot Away have been mainstays against similar company for a long time.  Sig K, already a three-time winner at this meet, faces her hardest foes yet here.  However, Elizabeth’s Fever looks likely to slip through this betting unnoticed, and has a lot to recommend her here.  She drops back from state-bred allowance company last out to starter-optional types here.  All four of her career wins have come going six furlongs on dirt, including two at Hawthorne.  Her speeds are competitive with this company.  Most interesting here is her late pace since My Moment, A Shot Away, Crissy Field, and Flying Phoebe all show so much speed.  Elizabeth’s Fever’s late pace is right in range with the likely shorter-priced Somali Byrd, and yet Elizabeth’s Fever is a more proven six-furlong dirt horse than Somali Byrd.  This adds up to a solid price play.

Race 5: Joy to the King - Joy to the King has finished in the money in both of his starts this meet, and returns to a similar level and distance here.  Flathead River, a horse who returns today, has gotten the top prize in both of those races.  However, Flathead River will get a battle on the front end with the speedy Expect Elprada in the field, and even rail-drawn Dandyman has shown a lot of speed at times.  This should give midpack-to-closing type Joy to the King the best pace setup he has had all meet.  His speeds are strong, his late pace is solid, and and he reliably fires.  On the human front, Joy to the King keeps rider Santo Sanjur, who has been in the irons for both of his races earlier this meet.  In short, if Joy to the King runs his race, he should easily hit the board against the set he faces today.

Race 6: Revolt - Last out, Revolt finished a close second in an open $25,000 claimer at a mile and a sixteenth on the Fair Grounds turf.  This is an open $25,000 as well, but Hawthorne is a bit easier circuit.  His speeds are consistently strong for the field, and his records over the track (4-2-1-0) and distance (7-2-2-1) suggest that he should bring his race to a turf mile at 35th and Cicero.  The pace should set up nicely for Revolt, too.  He is a closer -- but with Hey Pretty Boy, Rocket Professor, and Love You Mon all being frontrunning types, he should have more than enough to attack late.  Finally, the humans bolster his case.  Trainer Louie Roussel has not started much at Hawthorne yet, but three of his four going into the race week have hit the board.  Rider Julio Felix is also starting the meet well, with five wins and another 11 money finishes in 18 starts.  Though Revolt should be well-bet, he looks like the goods.