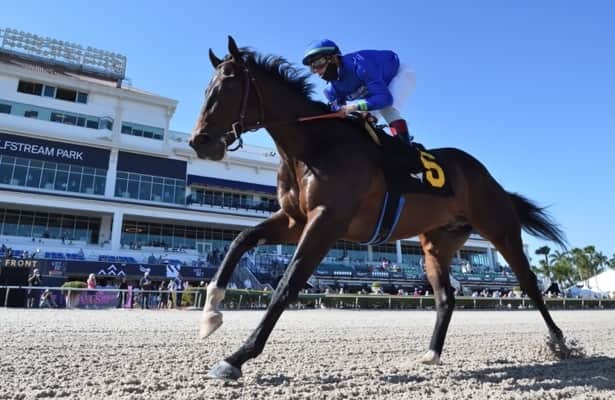 It was Godolphin homebred Prevalence for trainer Brendan Walsh who was a dominant winner of a deep seven-furlong maiden at Gulfstream Park on Saturday that included Stage Raider, a half-brother to Triple Crown winner Justify.

This was the first time out for both colts.

Ridden by Tyler Gaffalione, Prevalence at 7-1 odds broke well and grabbed the lead after a quarter mile and battled it out with Stage Raider through the early going. Fractions were 22.66, 49.09 and 1:10.45.

By Medaglia d’Oro out of Enrichment, by Ghostzapper, Prevalence entered the stretch with a small lead, but quickly accelerated from the field to win by 8 1/2 lengths in a final time of 1:23.00.

“I thought he was a nice colt. He put in some nice work, but of course, you’re always looking for confirmation. Thankfully, we got it,” Walsh said. “It was a lovely experience, which is great for a young 3-year-old first time out.”

The winner raced with Lasix, which will not be allowed if he next steps onto the road to the 2021 Kentucky Derby.

Trained by Chad Brown, the highly touted Stage Raider – a son of Pioneerof the Nile out of Stage Magic, by Ghostzapper – had been trading at odds of 40-1 in Las Vegas for the 2021 Kentucky Derby prior to his debut. He was a distance second with Ghazaaly – a $1.05 million auction purchase for Todd Pletcher carrying another big pedigree as a son of Curlin rounding out the trifecta.

Prevalence returned $17.60 for the win. He opened Saturday at Circa Sports in Las Vegas at 40-1 for the Kentucky Derby and currently sits at 30-1. Stage Raider opened at 100-1.