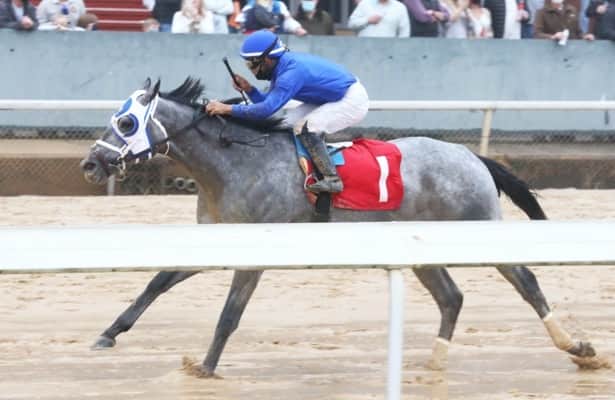 The Midwest contenders for the 147th running of the Kentucky Derby have been whittled down slowly in the last several weeks. Here are the top names in Middle America ahead of this weekend’s three Derby points races.

[RELATED - Blue Grass analysis: Who to play with Essential Quality]

The undefeated Tapit colt impressed in his last win, a 4 1/4-length victory in the Southwest Stakes (G3) at Oaklawn on Feb. 27. Before that, he scored in both the Breeders’ Cup Juvenile and the Breeders’ Futurity (G1) at Keeneland.

Essential Quality is entered in Saturday’s Blue Grass Stakes (G2) at Keeneland. He is 11th on the Derby leaderboard with 40 points.

Like the King currently is in second place in the points standings after his win in the Jeff Ruby Steaks (G3) at Turfway Park on Saturday. Before that, he finished second in the Battaglia Memorial, also at Turfway.

After he likely locked up a spot in the Derby with a win in the Risen Star (G2) on Feb. 13, Mandaloun finished a disappointing sixth in the Louisiana Derby (G2) on March 20.

The Into Mischief colt could return once more before the Derby in the Lexington (G3) on April 10.

Midnight Bourbon essentially clinched a spot in the Derby with a second-place finish in the March 20 Louisiana Derby. Before that, he won the Lecomte (G3) and finished third in the Risen Star.

The colt has 66 Derby points and is sixth in the standings.

Helium tried dirt for the first time in the Tampa Bay Derby (G2) on March 6. After going off as a 15-1 shot, the colt scored an upset victory.

Casse said he will send the colt straight to the Derby after the win.

The third-place finisher in the Breeders’ Cup Juvenile and winner of the Kentucky Jockey Club (G2), Keepmeinmind finished sixth in the Rebel (G2) on March 13. He is set to run Saturday in the Blue Grass.

The Tapit colt finished fourth in the Louisiana Derby after second-place efforts in both the Lecomte and Risen Star. Proxy has 34 Derby points, good for 14th in the standings.

Soup and Sandwich impressed in his first two races, prompting Casse to give him a chance in Saturday’s Florida Derby (G1). The Into Mischief colt did not disappoint, earning a second-place finish.

Super Stock won his only stakes victory at Lone Star in the Texas Thoroughbred Futurity on Aug. 11. In his last race, the March 13 Rebel Stakes at Oaklawn, he finished fourth.

The Dialed In colt could run back in the Arkansas Derby (G1) on April 10. He last worked Monday at Oaklawn, breezing five furlongs in 1:00.2.

Caddo River finished a disappointing fifth in the Rebel Stakes on March 13 after winning the Smarty Jones in January. He has 10 Derby points and is 30th in the standings.

The Hard Spun Colt is set to return on April 10 in the Arkansas Derby. He last worked Saturday, going four furlongs in 48.0 at Oaklawn.

The winner of the first 2021 Kentucky Derby prep race, the Iroquois (G3), the Dale Romans-trained colt has failed to impress since then, never finishing better than sixth. Sittin On Go will try one final Derby prep on Saturday in the Blue Grass at Keeneland.

Here is the remaining schedule on the Midwest road to the Kentucky Derby: