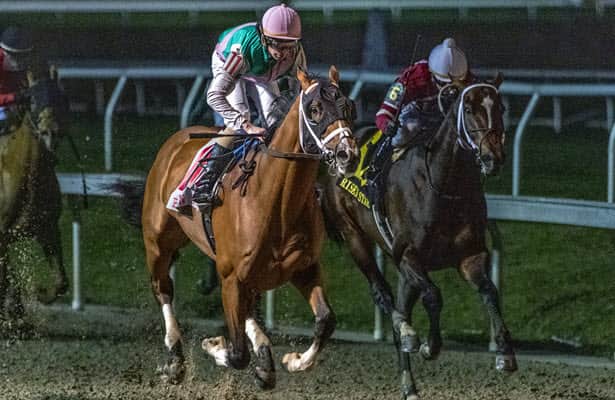 The midwest contenders for the 147th running of the Kentucky Derby have been whittled down slowly over the past several weeks. Here are the top names ahead of this weekend’s three Derby preps, which includes a pair in the midwest.

Mandaloun earned his first stakes win in the Feb. 13 Risen Star (G2) at Fair Grounds. Before that, he finished third in the Lecomte (G3).

He currently sits in first place on the Kentucky Derby leaderboard and has essentially clinched a spot in the field. He is pointed toward the Louisiana Derby (G2) on March 20.

Another Cox runner, this Shortleaf Stable homebred won the Smarty Jones Stakes most recently when making his stakes debut. He finished at 15-1 in the third pool of the Kentucky Derby Future Wager.

The winner of the Breeders’ Cup Juvenile on Nov. 6 in his most recent trip to the post, he is set to make his 3-year-old bow in the Southwest Stakes (G3) on Saturday at Oaklawn.

Essential Quality returned to work at Fair Grounds in December, most recently working five furlongs in 1:00.8 at Fair Grounds on Saturday. He closed at 9-1 in the third Kentucky Derby Future Wager pari-mutuel pool.

The third-place finisher in the Breeders’ Cup Juvenile and winner of the Kentucky Jockey Club (G2), Keepmeinmind’s most recent work came on Feb. 8, going four furlongs at Oaklawn in 49.6.

He is expected to make his sophomore bow in the March 13 Rebel (G2) at Oaklawn Park.

Midnight Bourbon returned to work on Monday for the first time since finishing third in the Risen Star. Before that, he won the Lecomte.

The winner of the Springboard Mile finished fifth in the Risen Star. He has not worked since that race.

The second-place finisher in the Breeders’ Cup Juvenile Turf Sprint moved to dirt for the Springboard Mile, where he also finished second earlier this year, picking up Derby points in the process.

The Brad Cox trainee broke his maiden sprinting in his first time out at Fair Grounds on Dec. 19. He earned a 90 Beyer Speed Figure for the six-furlong race.

A son of Into Mischief, the Juddmonte Farms homebred, who is spending the winter at Fair Grounds, last worked Sunday, going four furlongs in 49 seconds.

The Tapit colt has not managed to break through with a victory in a Derby prep race. However, the Godolphin homebred has finished second in both the Risen Star and Lecomte, earning 24 points in the process, enough to put him in fourth place in the standings.

The winner of the first 2021 Kentucky Derby prep race, last September's Iroquois (G3), the Dale Romans-trained colt has failed to impress in his most recent races, finishing sixth in both the Holy Bull (G3) and Kentucky Jockey Club and ninth in the Breeders’ Cup Juvenile. He worked Saturday, going five furlongs in 1:01.25 at Gulfstream.

Last time out, the Dale Romans-trained colt finished ninth in the Sam F. Davis (G3) at Tampa Bay on Feb. 6. Before that, he finished second in the Kentucky Jockey Jockey Club.

Smiley Sobotka is spending his winter at Gulfstream Park, where he returned to work Dec. 27. He most recently worked Saturday, going four furlongs in 48.78.

Super Stock won his only stakes in the Texas Thoroughbred Futurity at Lone Star on Aug. 11. In his last race, the Street Sense Stakes at Churchill Downs on Oct. 25, he finished second.

The colt is wintering at Fair Grounds, where he last worked Monday, going five furlongs in 1:0. According to trainer Steve Asmussen, he will run in the Rebel Stakes.

The third-place finisher in the Kentucky Jockey Club, Arabian Prince finished fifth in the Lecomte. He has not worked since before that race.

The winner of the Breeders’ Cup Juvenile Turf for trainer Mike Maker, Fire At Will will switch to dirt in Saturday’s Fountain of Youth (G2) for his sophomore bow.

He has been spending the winter at Gulfstream Park, where he last worked Saturday, performing a five furlong drill in 1:02.75.

Warrior in Chief broke his maiden on third attempt, going 1 1/16 miles at Churchill Downs on Nov. 28. He is wintering at Turfway Park, where he is cross entered for both an allowance race and Friday night's John Battaglia Memorial, a points-paying Derby prep race.