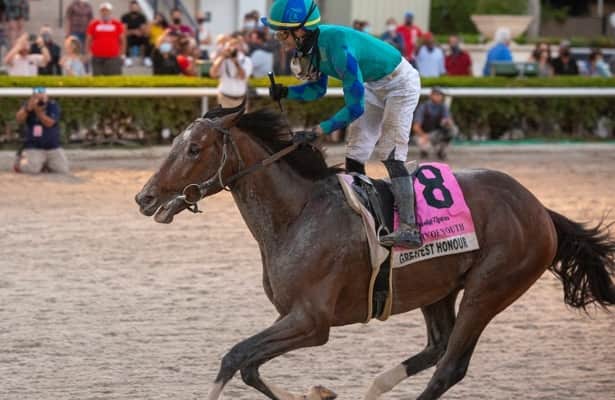 With only 52 days left until the 2021 Kentucky Derby, the three most recent winners of 50-point qualifying races on the East Coast have earned enough points to secure a spot in the Run for the Roses.

Greatest Honour won his second race on the Derby trail in the Fountain of Youth (G2) and upped his point total to 60. Weyburn won the Gotham (G3) at odds of 46-1, and at 15-1 Helium took the Tampa Bay Derby (G2). Both of those upset winners got the 50 points to secure a spot in the Derby starting gate.

On the East Coast, the Derby contenders have two chances left to gather points at the highest level (100-40-20-10) in the Florida Derby (G1) at Gulfstream Park on March 27 or the Wood Memorial (G2) at Aqueduct on April 3.

Greatest Honour – (5-1 – Tapit – Shug McGaughey - Courtlandt Farms - 60) Greatest Honour continued his domination of Gulfstream’s road to the Kentucky Derby when he swept to victory in the Fountain of Youth and added 50 points to the 10 he already had from the Holy Bull (G3). The son of Tapit earned an 89 Beyer Speed Figure from the Fountain of Youth. Trainer Shug McGaughey will continue on the same path that he used when Orb won the Derby in 2013, so Greatest Honour makes his next start in the Florida Derby. The stretch out to nine furlongs will be to the liking of the Courtlandt Farms home-bred.

These contenders are stakes winners and have already earned Derby qualifying points and they are listed in order by Derby points.

Helium (25-1 – Ironicus – D. J. Stable – Mark Casse – 50) Helium stayed unbeaten in three career starts when he battled down the stretch to win the Tampa Bay Derby and gathered 50 Derby points. This was his first start on a dirt track after winning his first two races at Woodbine on the Tapeta. The surprise winner at odds of 15-1 got an 84 Beyer for his 3/4-length victory. The $55,000 yearling purchase is currently not nominated for the Triple Crown series, but the New Jersey-based D. J. Stable has indicated that it will pay the $6,000 late fee by the March 29 deadline. Trainer Mark Casse said the current plan is to train up to the first Saturday in May.

Weyburn (75-1 – Pioneerof the Nile – Chiefswood Stables – James Jerkens – 50) Weyburn headed to the Gotham after a maiden victory at Aqueduct in his third career start in December, which was why he went to post at odds of 46-1. He pressed the pace, which was set by a Bob Baffert runner, took the lead in the stretch and held off the closing rally from anther maiden winner, Crowded Trade. Weyburn also will be a late Triple Crown nominee whether trainer Jimmy Jerkens decides to go to the Derby or make the Belmont Stakes his ultimate goal. The 95 Beyer represented a significant move forward from the 69 he earned in his maiden score.

Risk Taking (25-1 - Medaglia d’ Oro – Chad Brown – Klaravich Stables, LLC - 10) Following his win in the Withers (G3), trainer Chad Brown skipped the Gotham, preferring to return to the nine-furlong distance in the Wood Memorial. Those plans for the long-striding son of Medaglia d’ Oro have not changed as Brown seeks his first Kentucky Derby victory.

Highly Motivated (20-1 - Into Mischief – Chad Brown – Klaravich Stables, LLC – 10) Highly Motivated did not get an ideal trip in his 2021 debut in the Withers, where he was an odd-on favorite. This Chad Brown runner was on the inside down the backstretch when he got in tight quarters and had to steady. He lost ground, and once he got clear he rallied wide to finish third securing 10 points. Brown will keep his top Derby contenders apart and send Highly Motivated to the Blue Grass (G2) on April 3.

Brooklyn Strong (45-1 - Wicked Strong – Danny Velazquez – Mark Schwartz -10) – Brooklyn Strong is finally fully recovered from an illness that delayed the 3-year-old debut for the impressive winner of the Remsen (G2) at Aqueduct in December. Brooklyn Strong needs a top three finish in the Wood Memorial to have a chance to get in the Kentucky Derby field.

These 3-year-olds are listed in order of Derby qualifying points earned.

Hidden Stash (28-1 – Constitution – BBN Racing – Victoria Oliver – 22) Hidden Stash picked up another 20 Derby points when he rallied from 10th to finish second in the Tampa Bay Derby. He got into contention down the stretch but could not get by the eventual winner. Trainer Vickie Oliver has indicated that the Blue Grass will be next. He will need to hit the top four to get enough points to qualify for the Derby.

Crowded Trade (75-1 – More Than Ready – Klaravich Stables – Chad Brown – 20) Crowded Trade was a debut maiden winner at the end of January for Chad Brown who was trying to move him onto the Derby trail after racing only six furlongs in that first victory. He rallied from eighth and last, got the lead briefly in the stretch, and lost a head bob at the wire. The 20 points for second got him in the hunt for a spot in the Derby gate. He’ll need some more points in the Wood Memorial to have a chance to make the field.

Capo Kane (N/A – Street Sense – Bing Cherry Racing, L. Liberto - Harold Wyner - 12) – In the Gotham, trainer Harold Wyner hoped the cut back to the mile distance of the Jerome would be all that was needed for Capo Kane. But he was unable to get into contention early in the race and finished sixth, dimming his Derby hopes as distances get longer in the remaining prep races.

Candy Man Rocket (100-1 – Candy Man – Frank Fletcher Racing Operations – Bill Mott - 10) Candy Man Rocket was the 8-5 favorite in the Tampa Bay Derby based on his stretch-out victory in the Sam F. Davis (G3), which came when he pressed the pace. But he broke a step slow in the Tampa Bay Derby field of 12, which meant he found himself in an unfamiliar spot toward the back of the field. He could not recover from that disadvantage and finished 11th.

Tarantino – (N/A – Pioneerof the Nile – SF Racing, Starlight Racing, Madaket Stables, Stonestreet Stables, Golconda Stable, Siena Farm, Robert Masterson – Rodolphe Brisset - 9) Tarantino followed his runner-up finish in the Holy Bull with a fourth in the Fountain of Youth and now will need to pick up another 20 points to have a chance to qualify for the Derby.

Unbridled Honor (N/A – Honor Code – Whisper Hill Farm – Todd Pletcher – 5] Todd Pletcher gave Unbridled Honor a chance on the Derby trail after breaking his maiden at Tampa Bay Downs just a month before that track’s signature race. The son of Honor Code was last after a half mile and then rallied to finish fourth, beaten by about seven lengths. Pletcher will have to decide whether that effort earned him another shot to gather Derby qualifying points or if they will wait for other big races for 3-year-olds.

Nova Rags (100-1 – Union Rags – Michael Shanley – Bill Mott - 4) Nova Rags did not run in the Tampa Bay Derby after his second in the Sam F. Davis, and he is expected to travel outside of Florida for his next race on the Derby trail. Trainer Bill Mott mentioned the Louisiana Derby (G2) on March 20 as a possibility.

Known Agenda (30-1 - Curlin – Todd Pletcher – St. Elias Stable - 2) Known Agenda bounced back from a disappointing finish in the Sam F. Davis with an easy victory in an allowance race at Gulfstream. He raced with blinkers on and Lasix for the first time. With that strong performance at Gulfstream, Pletcher may gave him another chance in the Florida Derby.

Nicky the Vest (100-1 – Runhappy – Jonathan Thomas – R. LaPenta - 0) – This late developing son of Runhappy is unbeaten in two starts against New York-breds. Since then, trainer Jonathan Thomas has had his eye on the Wood Memorial.

There are still three horses remaining on this list with big maiden victories that might take a chance in one of the remaining points races.

Prevalence (16-1 – Medaglia d’Oro – Godolphin – Brendan Walsh) Prevalence was a flashy front-end maiden winner by 8 1/2 lengths going a mile at Gulfstream on Jan. 23 that earned an 89 Beyer. He spiked a fever and missed some training, but now he is the 4-5 morning line favorite in a first-level allowance again going a mile at Gulfstream in the eighth race on Thursday.

Untreated (N/A – Nyquist – Team Valor – Todd Pletcher) Untreated was defeated by Candy Man Rocket in his debut and then sold at auction in the Paul Pompa dispersal sale. Racing for new owners Team Valor, he broke his maiden at Tampa by almost nine lengths going two-turns.

» Horse: Greatest Honour
» Horse: Weyburn
» Race: Wood Memorial (2021)
About the Derby Radar
Back for the 2021 Kentucky Derby trail, Horse Racing Nation's Derby Radar seeks to identify promising maiden, allowance and even stakes winners who could target points-paying preps down the line. We'll cover the buzz horses, of course, then using a systematic approach based on past years' Derby contenders identify other talented colts moving up the ladder.
• 2021 Kentucky Derby contenders

Watch: Cox is all smiles after 'Big 3' works towards Breeders' Cup
It was a busy Saturday morning at Churchill Downs...