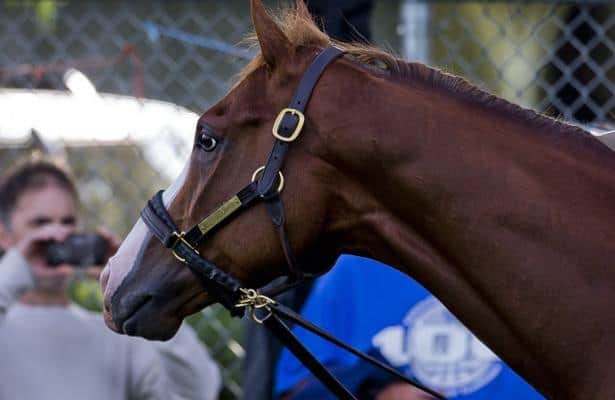 Given that none of the previous Japan road to the 2020 Kentucky Derby winners Dieu du Vin, Vacation and Cafe Pharoah showed up for Saturday’s Fukuryu Stakes at Nakayama Racecourse, the winner was bound to jump to the top of the leaderboard with a victory.

In a normal year, gate-to-wire winner Herrschaft would be first in line to receive Churchill Downs’ invitation to the May 2 race. This, obviously, is not a normal year.

As with the U.S. circuit of prep races, Japan could see additions yet to be announced over the summer with the Kentucky Derby pushed back to Sept. 5. Still, for the time being, Herrschaft is the one to catch after finishing up 1 1/8 miles in 1:53.4.

The son of Will Take Charge, purchased for $200,000 as a Keeneland September yearling, is out of the Mr. Greeley mare Love Ava Love, a former claimer who made just three career starts. Herrschaft, however, has now made it to the gate six times, winning three of those.

The Fukuryu marked his first stakes score after jockey Yusuke Fujioka sent Herrschaft straight to the lead running a clockwise, two-turn configuration. The pace setter was never pressured, and he opened up at the top of the lane, the victory never appearing in doubt.

Herrschaft earned 40 Derby qualifying points on Japan’s trail. The 16 points to runner-up T O Keynes rank him third on the leaderboard, while Miyaji Kokuo (8) and American Face (4) followed in the running order.

Herrschaft certainly looked formidable going a route of ground Saturday. Information is scant on why the Nov. 23 Cattleya Sho hero Dieu du Vin hasn’t raced since. The Dec. 18 Zen-Nippon Nisai Yushun winner Vacation suffered a non-Derby trail defeat to open his season March 18, while Cafe Pharoah is 2-for-2, going last to first in the Feb. 23 Hyacinth.