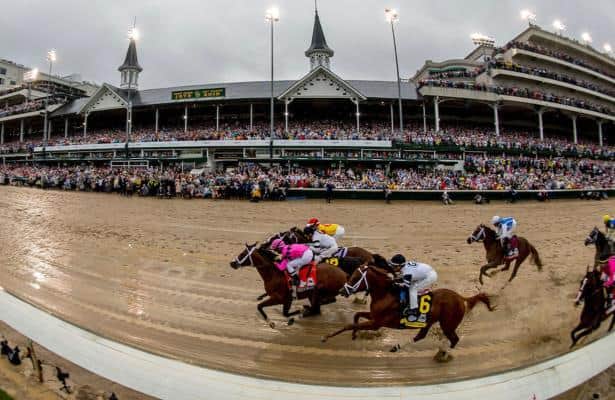 The end of summer’s premier race meets at Saratoga and Del Mar marks a turning point for the rising crop of 2-year-olds. Now it’s safe to start penciling some of these juveniles in for the Breeders’ Cup, plus noting connections, pedigrees and running styles when it comes to possibilities for the 2020 Kentucky Derby trail.

Here, we’ve assembled a list of 20 names to know, with each figuring to appear down the line — and perhaps next out — in a points-paying Kentucky Derby prep. The road begins Sept. 14 with Churchill Downs’ Iroquois Stakes (G3) and leads up to the May 2, 2020, race under theTwin Spires.

From here on out, we'll be profiling horses who fit the profile of a future Derby trail runner as they announce themselves. Bookmark HorseRacingNation.com/blogs/DerbyRadar, and read on for the first 20 in alphabetical order…

Acre (Bill Mott): A half-sibling to Donn Handicap (G1) winner Lea, this son of Blame struck second out in an Aug. 17 maiden special weight event at Saratoga that came off the turf. But he debuted on the main, and connections likely sought out a longer spot, even if it had to be on the green. The race would have gone at 1 1/16 miles if not shifted to be a seven-furlong dirt event.

American Theorem (George Papaprodromou): The connections don’t scream, or even whisper, Kentucky Derby, but breeder Sierra Farm must have thought plenty of this colt to set a reserve auction price above $190,000. The son of American Pharoah, who is producing runners on dirt and turf, broke his maiden going 5 1/2 furlongs Saturday at Del Mar in a hold under the wire.

Basin (Steve Asmussen): The Hopeful Stakes (G1) winner needs little introduction at this point. From speaking to his ownership, however, it’s interesting to hear he had never so much as trained on slop before winning the Labor Day feature at Saratoga. As a son of first crop sire Liam’s Map, this will be a case of finding out how far he can go.

By Your Side (Eddie Kenneally): The Constitution colt went into the Hopeful 2-for-2, so he’s among the group of contenders from that race who may deserve a pass given the way the surface came up. This $240,000 yearling is also already a graded stakes winner of the Sanford (G3) going six furlongs back on July 13.

Collusion Illusion (Mark Glatt): The Florida-bred son of Twirling Candy is also perfect through two starts, winning the Best Pal (G2) last out. Glatt considered the Del Mar Futurity (G1) before electing to wait until Santa Anita’s Sept. 27 American Pharoah (G1) for a next start. Collusion Illusion, bought for $300,000 after selling for $50,000 as a yearling, returned to work last Friday.

Dennis’ Moment (Dale Romans): Connections were talking about him before an unfortunate debut, when he lost jockey Robby Albarado at Churchill Downs, as a Derby prospect. The Tiznow colt returned to win an Ellis Park maiden flight by 19 1/4 lengths and register a 97 Beyer Speed Figure, fastest so far for the crop. He’s Iroquois-bound and the top hype horse of this group.

Eight Rings (Bob Baffert): Second-fastest on the Beyer scale thanks to an easy victory on debut, he waited until his next go around for some baby issues. After breaking inward in the Del Mar Futurity, Eight Rings righted himself, then still bumped with a rival and lost jockey Drayden Van Dyke. Baffert would like to run him in the American Pharoah.

Enforceable (Mark Casse): There’s no question this full brother of Grade 2 winner Mohaymen can get the distance. Now it’s just a matter of how fast. Enforceable broke his maiden at fourth asking Aug. 22 at Saratoga while going a long way for 2-year-olds in the summer, 1 1/8 miles on the main track. It set him up for Keeneland’s Breeders’ Futurity (G1).

Express Train (John Shirreffs): Defeated soundly on debut by Eight Rings at 5 1/2 furlongs, this one likely wasn’t cranked up by a conservative barn. He stretched to a mile at second asking and rolled Aug. 28 to a 14 1/4-length victory at Del Mar. Since winning the 2005 Derby with Giacomo, Shirreffs has started three other horses the first Saturday in May, most recently Gormley in 2017.

Famished (John Kimmel): A $375,000 Ontario-bred, he could have a race like the Queen’s Plate in his future. But in the near term, Kimmel, who saddled Derby horses in 2000 and 2004, is pointing to Belmont Park’s Oct. 5 Champagne (G1) with an Uncle Mo colt that lost to talented rival Tumbling Sky on debut, then struck going a bit farther Saturday at Saratoga.

Glory Road (Todd Pletcher): Campaigned by China Horse Club and WinStar Farm, he just got there closing to win a seven-furlong maiden flight back on Aug. 3 at Saratoga. The Commissioner colt doesn’t show any works since then, so nothing’s on the horizon. Any $220,000 debut winner for Pletcher is worth watching in this space, even if it means waiting until the spring.

Gouverneur Morris (Todd Pletcher): But…here’s the one they’ll all be talking about from the same barn. Also co-owned by WinStar, he’s a $600,000 son of Constitution who apparently carried high expectations into Monday’s debut. Gouverneur Morris aced that test, gliding to a nine-length win in the Saratoga slop to signal a bright future.

Green Light Go (Jimmy Jerkens): He scratched from the Hopeful due to a sloppy track, which is an interesting move for a son of Hard Spun who figured to like that going. Still, there’s no denying this colt’s talent as a 2-for-2 winner of the Saratoga Special (G2). He should show up next in the Champagne.

Gozilla (Steve Asmussen): When this Flatter colt finished third after setting the Hopeful pace, Asmussen noted that he didn’t get much out of the maiden-breaking win, a stylish, Aug. 10 victory going six furlongs in 1:09.59 at Saratoga. The barn runs its horses when they’re healthy, so expect to see him go again in the next round of preps.

Rowdy Yates (Steve Asmussen): The Ellis Park Juvenile winner is 2-for-3 and, on figures, improved quite a bit in his last start going all the way in the seven-furlong event. He’s nominated to the Iroquois but could also pop up at Remington Park given he's an Oklahoma-bred. That series of 2-year-old stakes produced Long Range Toddy for the same outfit.

Shoplifted (Steve Asmussen): The Hopeful runner-up has a few more questions to answer for a loss moving forward than Gozilla considering that in a maiden victory going 5 1/2 furlongs at the Spa, he got the ideal setup sitting third behind leaders who dueled going 22.18 and 45.18 to open proceedings. The $800,000 price tag certainly signals potential.

Tap It To Win (Mark Casse): The Live Oak homebred successfully switched from Woodbine’s turf to Saratoga’s dirt on Aug. 24, with the victory perhaps overshadowed by a slew of stakes later that afternoon leading up to the Travers. A son of Tapit, he registered an 86 Beyer and has the Breeders’ Futurity or Champagne next.

Three Technique (Jeremiah Englehart): The Mr Speaker colt looked to be done as the favorite on Saturday at Saratoga before uncorking a rally of the like you rarely see from a 2-year-old. After two runner-ups to open his career, the Bill Parcells-owned runner revealed obvious talent if he can get past some of the greener sides of his performance.

WOW. You NEED to see this... 2YO Three Technique from last to first with @jose93_ortiz in the irons for @jceracing in the 7th at Saratoga & another win for former @Giants coach Bill Parcells ?? #SaratogaLIVE pic.twitter.com/vINfRhCQjq

Tumbling Sky (Steve Asmussen): The barn started three in the Hopeful, and he wasn’t among them. But Tumbling Sky, a son of Competitive Edge, remains on the work tab after an Aug. 10 debut that was just a tick slower than stablemate Gozilla. The sire prompts questions of distance, but they won’t have to be answered until later.

Aside from those 20, there are a few other 2-year-olds who merit watching as prep season begins…

What can we make of that Del Mar Futurity? With Eight Rings out of contention, they went entirely too fast early, as fractions measured 21.89 and 44.90 before the remaining contenders labored home. The 35-1 winner Nucky doesn’t figure to be a Derby prospect, but Wrecking Crew, his much more expensive stablemate, cost $875,000 for a reason. He was also second in the Best Pal.

Shirreffs, who trains maiden winner Express Train, also has in his care a pair of runner-ups to keep an eye on. Honor A. P., an $850,000 son of Honor Code, wound up 2 1/2 furlongs back of Ginobili in his Aug. 17 debut but should like more ground. Thunder Code, another by Honor Code, was dismissed by bettors in Saturday’s flight won by American Theorem. But he also encountered traffic trouble while rallying for third.

Tiz the Law debuted with fellow New York-breds, but the 4 1/4-length margin of victory doesn’t illustrate how easy he did it back on Aug. 8. Trained by Barclay Tagg for Sackatoga Stable — Funny Cide’s connections — he figures to try open company down the line. A shin issue has set him back in the near term.

Another bargain buy for trainer Kenny McPeek? Flute Maker romped by 11 1/2 lengths on Aug. 21 in maiden special weight company. But the fine print is important, as this was an event restricted to horses that hammered for $45,000 or less in their most recent sale and came off the turf. We’ll have to see him again.

Oh, and finally, D. Wayne Lukas has 2-year-olds, so you know he’ll be filling out the preps whenever possible. From the group, American Butterfly, fourth in the hopeful, and Kowalski, a maiden who has showed plenty of speed (but not so much stamina) stick out.