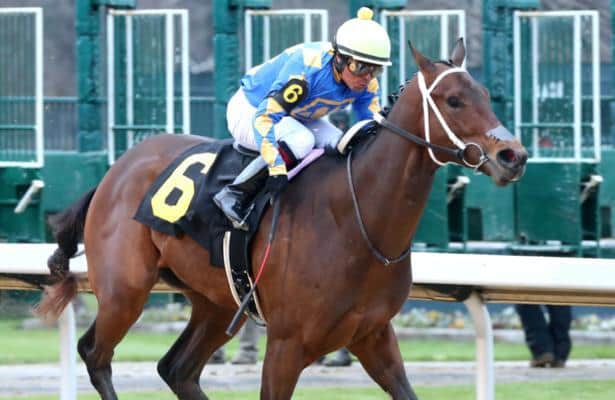 Of the eight horses currently probable to run in Monday’s Grade 3, $750,000 Southwest Stakes, only one hasn’t done his training locally.

Trainer Todd Pletcher informed Oaklawn Park’s media relations staff that Chase Tracker, off since finishing third in the Dec. 7 Remsen Stakes (G2) at Aqueduct, will ship in from his winter base at the Palm Beach Downs training center in Florida.

By Verrazano, Chase Tracker debuted a winner on Pennsylvania Derby day at Parx Racing going seven furlongs, then also ran a distant third to Independence Hall in the Nashua Stakes (G3). Back in the Remsen, he was beaten 4 1/4-lengths by front-running Shotski.

“He was good enough to break his maiden first time out, ran a respectable race in the Nashua and a good solid third in the Remsen,” Pletcher said. “He has been training steadily. We didn’t really have a firm plan in mind, but thought he worked very well here this past weekend, so we decided the timing for the Southwest was good.”

Chase Tracker, who runs for St. Elias Stable, tuned up for the 1 1/16-mile Southwest with a five-furlong breeze Sunday in 1:01.19. He’ll join some top local 3-year-olds in the Southwest, which awards 2020 Kentucky Derby qualifying points on a 10-4-2-1 basis to its top-four finishers.

The Steve Asmussen barn, as with last month’s Smarty Jones Stakes, will be well-represented with the winner (Gold Street), third-place finisher (Shoplifted) and fourth-place runner (Silver Prospector) all back for the Southwest. Gold Street has won his last three — all over wet tracks — while the latter two are previous stakes winners themselves on the Derby trail.

Trainer Brad Cox is expected to have two in Answer In, a narrow second behind Shoplifted in the Remington Springboard Mile in December, and Wells Bayou, a local allowance winner on Jan. 26. Anser In could vie for top billing on the morning line in what looks to be an open event.

Villainous is also expected to try the Southwest for trainer Jeremiah Englehart, who will wait for the March 14 Rebel Stakes (G2) to bring back Smarty Jones runner-up Three Technique. This new shooter to the Derby trail improved from an off-the-board finish on debut at Aqueduct to break his maiden on the Smarty Jones undercard.

Also a maiden, D. Wayne Lukas-trained American Butterfly exits a deep Oaklawn allowance flight on Feb. 2. Little Menace prevailed by a head, while Marvin was a neck back and Ancient Warrior 3/4 of a length behind at the wire. From that trio, only Ancient Warrior has worked since the last race.

Entries will be finalized and posts drawn for the Southwest on Friday. It caps a loaded Presidents Day card at Oaklawn that includes the Razorback Handicap (G3) for older horses and the Bayakoa (G3) for older fillies and mares, with all three graded events measuring 8 1/2 furlongs.

» Race: Southwest Stakes (2020)
About the Derby Radar
Back for the 2021 Kentucky Derby trail, Horse Racing Nation's Derby Radar seeks to identify promising maiden, allowance and even stakes winners who could target points-paying preps down the line. We'll cover the buzz horses, of course, then using a systematic approach based on past years' Derby contenders identify other talented colts moving up the ladder.
• 2021 Kentucky Derby contenders