Kentucky Derby 2020 Radar: South Bend 'in the mix' for preps 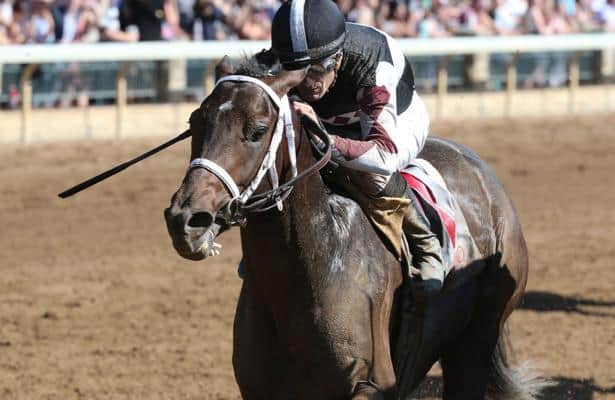 As more horses run back from Keeneland’s Saturday card, time will tell whether South Bend put in an exceedingly impressive performance when rallying to win an allowance race for 2-year-olds, or if a bias favoring horses on the outside portion of the track aided him.

Regardless, the Sagamore Farm runner is on the 2020 Kentucky Derby Radar, which seeks to identify horses headed to points-paying preps.

“We kind of wanted to see him get in the race a little bit more,” said trainer Stanley Hough. “He broke OK, but he just ended up in the same spot.

“It’s not what we really wanted, but when you end up first, it’s hard to complain.”

With South Bend 2-for-2, Hough said he’s “certainly in the mix” to appear next in Churchill Downs’ Kentucky Jockey Club Stakes (G2). The Nov. 30 race around two turns awards Derby qualifying points on a 10-4-2-1 basis to the Top 4 finishers.

According to a report from Tim Wilkin, of the Albany Times Union, Champagne Stakes (G1) winner Tiz the Law will run in -- and likely headline -- the Kentucky Jockey Club.

Did he run huge, or might an outside bias have helped South Bend? We'll find out next time with @SagamoreRacing's 2-for-2 colt "in the mix" for an upcoming Kentucky Derby prep: https://t.co/QjdM7ucLy2 pic.twitter.com/zo1nIUAJqD

Connections fetched this colt for a bargain $70,000 as a 2-year-old last March.

A well-spread field finished behind South Bend and Wheat King, with another three lengths to Night Code at Keeneland. The allowance ran as Race 5, relatively early on a card that seemed to favor wide runners.

Clocker Bruno de Julio tweeted Saturday calling it “the most tilted racetrack” seen in Keeneland’s new dirt era, adding the “the outside moves horses up three to five lengths.”

“On paper, you don’t know,” Hough said. “Algorithms is starting to come around. We hope he keeps on going.”

“He trains kind of like a distance horse,” Rankin said. “We’ve liked him all along. He’s really impressed us in the mornings.”

With Sagamore Farm owned by billionaire businessman and philanthropist Kevin Plank, founder of Under Armour, South Bend is a nod to one of the outfitter’s top teams: Notre Dame.