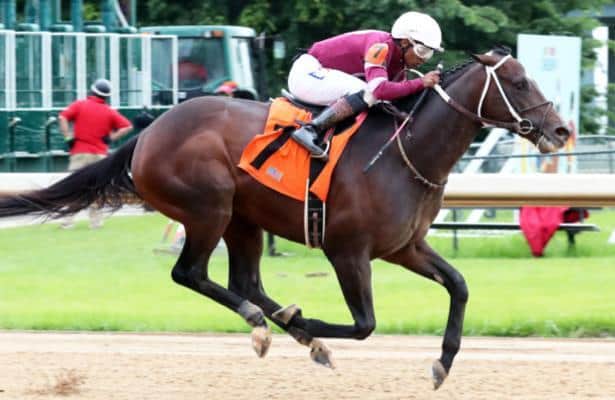 In a race that should put its top-two finishers under consideration to enter a crowded Arkansas Derby (G1) field, Shooters Shoot put a determined neck in front of Blackberry Wine to win Oaklawn Park’s fourth race Saturday.

That wasn’t the end of potentially influential non-stakes flights on the card when looking ahead to a postponed 2020 Kentucky Derby scheduled for Sept. 5.

Two races later, Steve Asmussen-trained Pneumatic had no problem with a wide trip, showing a wicked turn of foot to improve to 2-for-2 in the second division of a one-mile allowance optional claiming event worth $61,000.

Those races, along with the $200,000 Oaklawn Stakes run later Saturday for 3-year-olds, are each well-spaced to the May 2 Arkansas Derby, the only Kentucky Derby points prep currently scheduled with the COVID-19 pandemic wrecking the stakes calendar.

In addition to Saturday’s prominent runners, the likes of Louisiana Derby (G2) hero Wells Bayou, Rebel Stakes (G2) winner Nadal and Tampa Bay Derby winner King Guillermo (G2) are all pointing to the Arkansas Derby. Oaklawn officials have cut the purse from $1 million to $750,000 — its on-site casino isn’t generating revenue — but horsemen have hinted at the potential of split divisions.

Unbeaten Bob Baffert trainee Charlatan is another pointing to the Arkansas Derby, which takes us back to Shooters Shoot. On Feb. 16, Charlatan defeated Shooters Shoot by an easy 5 3/4 lengths when they clashed in a six-furlong maiden race at Santa Anita Park.

In consecutive mile starts for trainer Peter Eurton, however, Competitive Edge-sired Shooters Shoot has emerged a more formidable foe. Off a maiden win at Santa Anita, he shipped to Oaklawn and ran throughout inside of Blackberry Wine.

They were head and head, not allowing the rest of a deep field close even after opening up with a half mile in 45.87 seconds. The final time was 1:36.66 with Shooters Shoot grinding out a victory on the rail. It was another 5 3/4 lengths back to third.

Shooters Shoot is campaigned by ERJ Racing, Exline-Border Racing and Dan Hudock, including some of the same partners involved in reigning champion 2-year-old Storm the Court.

Later, Winchell Thoroughbreds homebred Pneumatic went to post as a favorite off a neck maiden win at six furlongs over Skol Factor, a rival who returned earlier in the card to romp in a maiden follow up.

Jockey Ricardo Santana Jr. handled Pneumatic, a son of Uncle Mo, with confidence as he sat fifth but looked rank chasing a half mile in a moderate 47.38 seconds. Santana set Pneumatic free midway through the turn, and he shot to the front in time to distance and gear down before the wire, gobbling up ground to win in 1:36.70.

Whether Saturday’s allowance winners will have the type of earnings needed to make the Arkansas Derby field is unknown. Both, however, look like a fit for points preps going into the summer once more qualifiers are set by Churchill Downs.

» Horse: Pneumatic
» Horse: Blackberry Wine
About the Derby Radar
Back for the 2021 Kentucky Derby trail, Horse Racing Nation's Derby Radar seeks to identify promising maiden, allowance and even stakes winners who could target points-paying preps down the line. We'll cover the buzz horses, of course, then using a systematic approach based on past years' Derby contenders identify other talented colts moving up the ladder.
• 2021 Kentucky Derby contenders