Kentucky Derby 2020 Radar: No giving up on Shashashakemeup 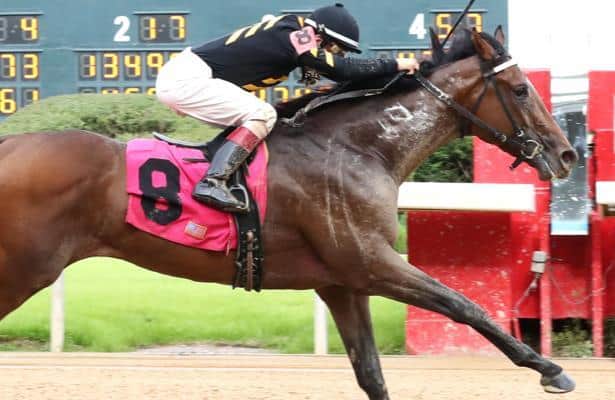 Going back to a debut victory for Shashashakemeup last November, trainer Keith Desormeaux hoped he had found his 2020 Kentucky Derby horse. As it turns out, he still may have one.

The Shackleford colt certainly woke up Sunday when he upset Oaklawn Park’s finale, an allowance optional claiming sprint, at 45-1, edging away after a wide trip around one turn.

Another with time on his side given the Derby’s rescheduled, Sept. 5 date, Shashashakemeup figures to get another try at a route race, Desormeaux relayed via text message after this latest victory.

“We tried him long twice,” Desormeaux said, with finishes of sixth in Fair Grounds’ Lecomte Stakes (G2) and 11th in a division of the Risen Star (G2). “The results were not the greatest. Although the Derby is so far off, we have time to experiment again.”

Desormeaux tends to run his horses into shape, not fretting race-by-race results but rather aiming for a big effort on the right day. In that respect, along with the bargain $45,000 purchase price, Calumet Farm’s Shashashakemeup is his kind of runner.

With a rallying Oaklawn allowance victory, Shashashakemeup could be back in the Kentucky Derby trail picture: https://t.co/JLbqbZHBOA

"We have time to experiment again." pic.twitter.com/3WuqtleGco

In a race where the odds-on favorite, Ginobili, didn’t fire, Shashashakemeup ran four-wide through the turn with a sustained bid that positioned him 1 1/2 lengths clear of second place at the wire. Shashashakemup completed six furlongs over a “good” track in 1:10.95.

Under jockey Stewart Elliott, the colt continued with a vigorous gallop out, looking like the same kind of talent who drew off to win his Nov. 17 debut at Churchill Downs by 5 1/2 lengths. That race was restricted to horses that sold for $45,000 or less, or didn’t meet their reserve at auction. Shashashakemeup beat a deeper field Sunday consisting of multiple former stakes runners.

Beyond Sunday, there’s a clean slate and no clear path forward with Shashashakemeup, who would be a stretch to make the Arkansas Derby gate with $75,820 in earnings thus far. But despite a six-race career that has seen him run long and short, plus on turf two back at Fair Grounds, the major target remains in play.

“The goal is definitely the Derby,” Desormeaux had said in November, “so whatever we can do to develop him with that race being an end point, that’s what we’re going to do.”