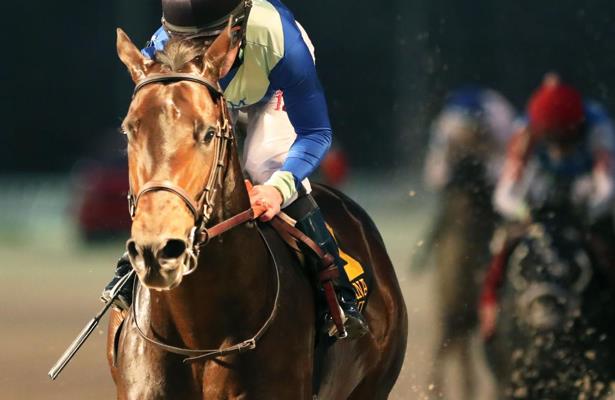 No Parole, the talented Louisiana-bred colt who’s 3-for-3 with a two-turn stakes victory in his last start, is hitting the 2020 Kentucky Derby trail.

After the son of Violence worked a half mile Monday in 49.40 seconds at Fair Grounds, trainer Tom Amoss said connections selected the March 14 Rebel Stakes (G2) at Oaklawn Park for No Parole’s move to open company.

No Parole cruised going a mile most recently in the Feb. 8 Premier Night Prince Stakes at Delta Downs. The Rebel will stretch him to 1 1 1/16 miles, while the March 21 Louisiana Derby (G2) at Fair Grounds measures a longer 1 3/16 miles.

“That’s a little bit more than what we’d want to do,” Amoss said of the latter option.

Since the Premier Night Prince, owner Maggi Moss has welcomed Greg Tramontin as a partner in campaigning this colt, who breezed through wins in state-bred maiden special weight and allowance ranks by a combined 27 1/2 lengths to open his career.

“He has a really good, smooth stride and covers a lot of ground without being asked,” Amoss said after Monday’s drill. “We got to see that today. He’s on his game.”

After an eye catching easy work this morning , NO PAROLE will be pointed to the Rebel @OaklawnRacing w @TomAmossRacing pic.twitter.com/jhnuFo4Jf7

Off a pair of six-furlong starts at Fair Grounds, Amoss stepped No Parole up in distance last time. Next comes a class test in a Derby prep that pays out qualifying points on a 50-20-10-5 basis to its top-four finishers.

“Anytime there’s development of a horse, there’s questions as you work your way forward,” Amoss said. “The big one to be answered here is, what do we have outside of Louisiana-breds?

“I think this race is going to be a really big jump in talent. I won’t get my hopes up until after this.”

Among the Rebel’s anticipated headliners are Southwest Stakes (G3) hero Silver Prospector and Nadal, a hype horse from the Bob Baffert barn who’s 2-for-2 after winning the San Vicente (G2) out west. Should No Parole succeed, he’d have time enough for a final Derby prep with the Arkansas Derby (G1) on April 11, also at Oaklawn.

» Horse: No Parole
» Race: Kentucky Derby (2020)
About the Derby Radar
Back for the 2020 Kentucky Derby trail, Horse Racing Nation's Derby Radar seeks to identify promising maiden, allowance and even stakes winners who could target points-paying preps down the line. We'll cover the buzz horses, of course, then using a systematic approach based on past years' Derby contenders identify other talented colts moving up the ladder.
Did we miss one? Email editor Jonathan Lintner (jlintner@horseracingnation.com) if you know of a horse that should be on the radar.
• 2020 Kentucky Derby contenders