Kentucky Derby 2020 Radar: Joseph O'Brien on the board with Patton win 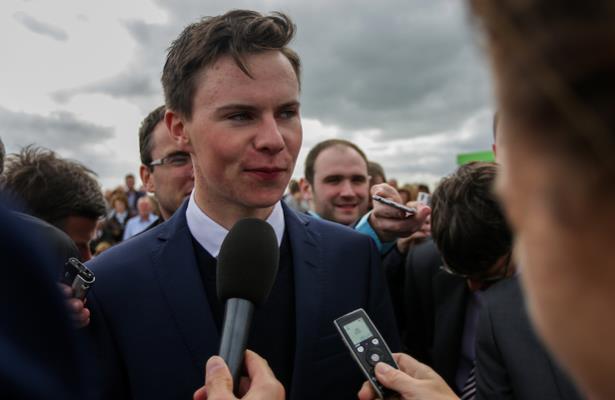 With trainer Aidan O’Brien having entered six Kentucky Derby horses over the years with little success, perhaps his son, Joseph, will fare better once given a chance the first Saturday in May.

Joseph O’Brien-trained Crossfirehurricane improved to 3-for-3 on Friday in Dundalk’s Patton Stakes, the latest stop on Europe’s Derby trail.

Campaigned by Scott Heider, who has Thoroughbred interests on both sides of the pond, the Kitten’s Joy colt pressed stablemate Choice of Mine before edging past in the stretch of the one-mile event on synthetic.

While by a turf sire, Crossfirehurricane is out of a dam, Louvakhova, who's a Maria’s Mon mare. That stallion was champion 2-year-old in 1995 while winning multiple graded races on American dirt.

In an indication the Derby may not be in Crossfirehurricane’s future, however, he was not nominated early to the Triple Crown.

Crossfirehurricane fends off stable companion Choice Of Mine to make it 3-3 for trainer @JosephOBrien2 pic.twitter.com/qCx47b9ryW

A victory in the Patton Stakes awarded Crossfirehurricane 20 qualifying points on the European leaderboard, good for the lead, as Triple Crown nominee Choice of Mine (8) ran second, Orchid Gardens (4) third and Dutch Admiral (2) fourth.

Away as the even-money favorite on the U.S. tote, Crossfirehurricane entered the Patton Stakes having broken his maiden going 7/8 of a mile on turf last June before prevailing at the same distance off the layoff Feb. 20 at Dundalk.

Joseph O’Brien, a 26-year-old former jockey, counts among his training highlights the 2017 Melboune Cup with Rekindling, the 2018 Irish Derby with Latrobe and the 2019 Breeders’ Cup Filly & Mare Turf with Iridessa. The last of those milestone victories made him the youngest conditioner to saddle a winner at the championships.

Father Aidan O’Brien, who most recently won the Patton in 2018 with Mendelssohn, had a trio of entries in this year’s edition. Two missed the board while another scratched to leave a field of nine in the one-turn event.

» Race: Kentucky Derby (2020)
About the Derby Radar
Back for the 2020 Kentucky Derby trail, Horse Racing Nation's Derby Radar seeks to identify promising maiden, allowance and even stakes winners who could target points-paying preps down the line. We'll cover the buzz horses, of course, then using a systematic approach based on past years' Derby contenders identify other talented colts moving up the ladder.
Did we miss one? Email editor Jonathan Lintner ([email protected]) if you know of a horse that should be on the radar.
• 2020 Kentucky Derby contenders