Kentucky Derby 2020 Radar: It's not too late for Mystic Guide 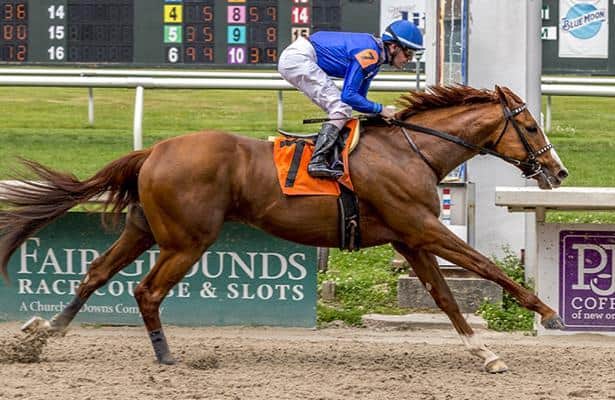 So, trainer Michael Stidham said, the $6,000 nomination fee to make Mystic Guide eligible for the Sept. 5 Kentucky Derby will be considered after the Godolphin homebred’s effort Saturday.

“We don’t have anything set as far as where we’ll go with him,” Stidham said after Mystic Guide, a son of Ghostzapper out of graded stakes winner Music Note, won at second asking, pulling away by five lengths on the Louisiana Derby (G2) undercard at Fair Grounds.

“Obviously, thinking about Derby points will be on the radar now,” Stidham added. “We obviously thought we’d have no chance to make May 2. Obviously things have changed. I don’t think Sheikh Mohammed will have any problem if he’s up to it to make him eligible.”

Ridden by Brian Hernandez Jr., Mystic Guide covered a mile and a sixteenth on the main track in 1:43.66 after bet down to nearly even money. Having settled in fifth early on, he rallied behind an opening half mile in 48.59 seconds, ridden wide and with confidence through the far turn until striking the front.
“I can’t say I was surprised with the way he ran today, because we’ve been very high on this horse for a while now,” Stidham said. “He’s impressed us in the morning, and I kind of thought he could go out there and do what he did today.”
Mystic Guide finished third in his Feb. 15 debut at Fair Grounds when sprinting.
“The only reason he ran six furlongs in his first start was on that day, the two-turn race for maidens was a mile and an eighth,” Stidham said. “I didn’t feel it was the right thing to do to run him a mile and an eighth the first time out. So I went with the sprint. It was a good race just to give him a little education.”
While no race has been mapped out for Mystic Guide’s next race, Stidham said the Fair Hill Training Center in Maryland is his next stop.
“He is as cool as they get and has a lot of class. He’s easy to train. He’s one of those horses that kind of does everything you ask of him. He’s got the right temperament and the right class level, as far as I’m concerned,” Stidham said.

Beyond the currently scheduled preps, Churchill Downs is crafting an updated Kentucky Derby points calendar consisting of existing races for 3-year-olds that could lead Mystic Guide into stakes company. But with more than five months until the first Saturday in September, there’s no need to rush.

Saturday plays: Focus on stakes from Churchill Downs, Woodbine
With the Breeders’ Cup at Del Mar in November loom...