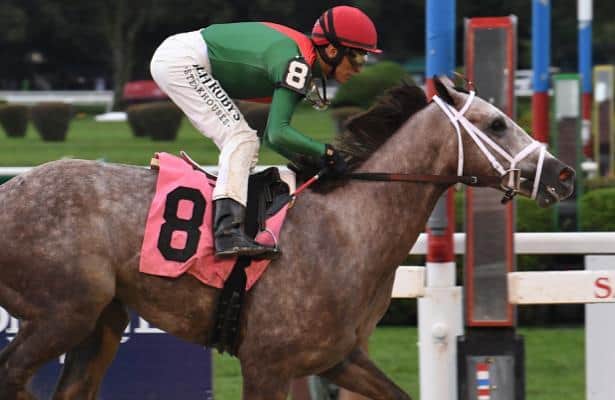 With an effort that should propel him to a major 2020 Kentucky Derby prep, Gouverneur Morris scored on return Friday at Tampa Bay Downs, with his winning time just two-hundredths off the track's 1-mile, 40-yard track record.

The Constitution colt tracked to the outside of pace-setting Untitled, who opened up in 23.40 seconds for the quarter mile and galloped through the half in 47.50 of the allowance optional claiming event. Then Gouverneur Morris came under a ride from a notable jockey.
Hall of Famer John Velazquez similarly made the trip to Tampa for trainer Todd Pletcher three years after they teamed up to break Always Dreaming's maiden over this course. Later that spring, of course, he won the Kentucky Derby.

Gouverneur Morris will be next to get his chance after responding to Velazquez through the far turn. He looked to be spinning his wheels initially but began gobbling up ground off the turn, making it a race with Untitled.

It would have been safe to suggest Untitled reached a distance limitation given he exited the Swale Stakes (G3), a sprint at Gulfstream Park. Then the final time of 1:38.88 flashed up. Gouverneur Morris ran fast -- nearly as fast as Jackson's track record 1:38.86 on May 4, 2019.

“He’s kind of a quirky horse," said Team Valor International's Barry Irwin, who co-owns the colt with WinStar Farm. "In the morning, he’ll get halfway down the stretch and kind of lose interest or something, then he’ll just refocus and take off. That’s kind of what he did today on the turn. It looked like he was floundering for a second, then when Johnny got after him he put (Untitled) away."

Irwin said earlier this week that the Florida Derby (G1) and Wood Memorial (G2) would be in play with a nice return Friday.
From there, “If he runs first or second and impresses us, then we’ll go to the Derby and feel good about it,” Irwin said. “We don’t want to beat him up just to get to the Derby.”

The buzz surrounding Gouverneur Morris began last year when he crossed the finish line first out, nine lengths in front on closing day at Saratoga. Stepped up next in Keeneland’s Breeders’ Futurity (G1), he ran wide and finished second by 5 1/2 lengths to Maxfield.

There were never plans to head to the Breeders’ Cup Juvenile from there, but waiting until February to see Gouverneur Morris' third start also wasn't intended.

“This horse had an extremely tough race at Keeneland. When he came back, he was rattled,” Irwin said earlier this week. “…We wound up giving him about six weeks. He got a little further behind than we wanted.”

Gouverneur Morris is clearly catching up quickly. Untitled was 1 1/4 lengths back at the wire. Letmeno and Sounion rounded out the finishing order after the fifth entrant in the race, Dudley Square, lost his rider at the start.

“I had to change my strategy (when Dudley Square lost his jockey), because I was expecting that horse to be on the lead,” Velazquez said. “But it worked out anyway. He finished real nice. This was a real tough race to come off the bench, but you have to start somewhere.”

Bettors made Gouverneur Morris a 1-2 winner in his first appearance since October.