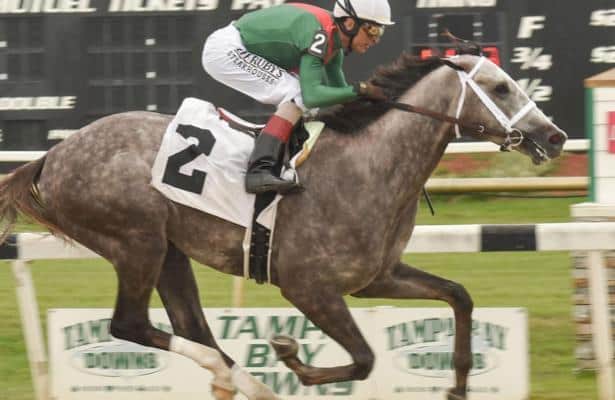 According to Gulfstream Park’s publicity staff, the Grade 1-placed son of Constitution could punch his ticket to the major 2020 Kentucky Derby prep with a strong breeze Saturday morning at Palm Beach Downs.

“With opportunities and travel options expected to be limited, we have changed our outlook on racing him,” Team Valour International’s Barry Irwin told Gulfstream. “We want to run him while there are still races available.”

Exiting last month’s victory at Tampa Bay Downs, connections had also considered Aqueduct’s Wood Memorial (G2). That race is now questionable to go after Thursday’s announcement that the New York Racing Association will suspend its races at Aqueduct after a backside worker tested positive for coronavirus.

Given that news — and the prospect that other options in the coming months could dissipate — Gouverneur Morris could step back up next weekend.

Team Valour campaigns Gouverneur Morris with WinStar Farm. The colt, one of nine Pletcher trainees nominated to the Florida Derby, is 2-for-3, with his lone defeat coming to the well-regarded Maxfield when second last fall in the Breeders’ Futurity (G1) at Keeneland.

“This horse had an extremely tough race at Keeneland,” Irwin said back in February. “When he came back, he was rattled…We wound up giving him about six weeks. He got a little further behind than we wanted.”

All along, however, there was hope he could be a special talent. The $600,000 purchase as a 2-year-old in training drew off by nine lengths last summer on debut at Saratoga. And in his return this season, Gouverneur Morris made a steady drive to prevail in his 1-mile, 40-yard outing at Tampa.

Gouverneur Morris shows a steady work tab since then, including last Sunday’s five-furlong bullet in 1:00.51.

» Horse: Gouverneur Morris
» Race: Florida Derby (2020)
About the Derby Radar
Back for the 2021 Kentucky Derby trail, Horse Racing Nation's Derby Radar seeks to identify promising maiden, allowance and even stakes winners who could target points-paying preps down the line. We'll cover the buzz horses, of course, then using a systematic approach based on past years' Derby contenders identify other talented colts moving up the ladder.
• 2021 Kentucky Derby contenders