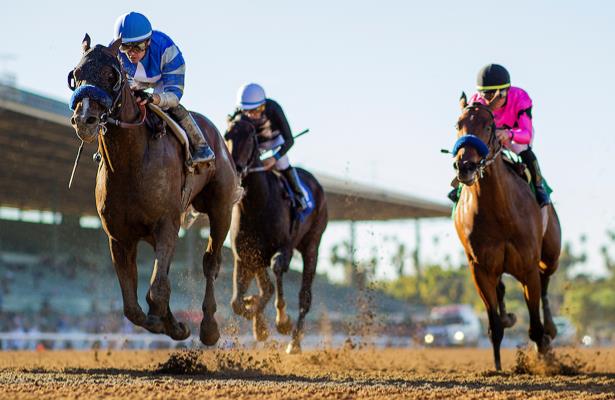 With a handful of legitimate prospects for the 2020 Kentucky Derby, Hall of Fame trainer Bob Baffert appears ready to take a divide-and-conquer approach to the next round of preps.

That includes potentially shipping dual graded-stakes winner Thousand Words to Aqueduct for the Wood Memorial (G2) on April 4. The nine-furlong test offers Derby qualifying points on a 100-40-20-10 basis to its top four-finishers.

Owned by B. Wayne Hughes' Spendthrift Farm in partnership with Dennis Albaugh's Albaugh Family Stable, the bay son of Pioneerof the Nile was handed his first loss when fourth in the San Felipe (G2) on March 7 at Santa Anita last out, a race that was won by stablemate Authentic.

Currently ninth on the leaderboard with 25 qualifying points, Thousand Words broke his maiden in October at Santa Anita before stretching out to two turns to win the Los Alamitos Futurity (G2) on Dec. 7 and the Robert B. Lewis (G3) on Feb. 1, earning 10 points for each race.

"Bob has so many prospects, and he needs to separate them," said Jason Loutsch, racing manager for Albaugh Family Stables. "He said after the San Felipe that Authentic would stay there. We may need more points, and it makes sense that the Wood and Bluegrass [on April 4 at Keeneland] are the two options."

Loutsch spoke before Monday's news that Keeneland had called off its spring meet, and also ahead of speculation that Churchill Downs will push the Derby back to Sept. 5 amid the COVID-19 pandemic.
Baffert has won the Wood Memorial with Congaree (2001) and Bob and John (2006), both of whom were owned by the late Bob McNair's Stonerside Farm.

Thousand Words is the first horse that Baffert has trained for Albaugh, and Loutsch sung high praises regarding his experience with the storied conditioner.

"He's a true horseman and he's a businessman," Loutsch said. "I've been thoroughly impressed with his operations. His communication with his owners has been fantastic. It seems like the second the horse crosses the finish line, he's calling or texting his owners."

Thousand Words was a $1 million acquisition from the 2018 Keeneland September Yearling Sale, where he was consigned by Brookdale Sales. Bred in Florida by Hardacre Farm, Thousand Words is out of the three-time graded stakes winning Pomeroy broodmare Pomeroys Pistol.
"He was just gorgeous. The pedigree was fantastic. His appearance met all our criteria," Loutsch said. "When we bought him, Spendthrift asked if we cared if we sent him to the West Coast. Spendthrift likes to spread their horses out a bit."

Baffert speculated that the grind-it-out sort of colt came too close to the pace in the San Felipe, offering up nothing in the lane of his first defeat.

» Horse: Thousand Words
» Race: Wood Memorial (2020)
About the Derby Radar
Back for the 2020 Kentucky Derby trail, Horse Racing Nation's Derby Radar seeks to identify promising maiden, allowance and even stakes winners who could target points-paying preps down the line. We'll cover the buzz horses, of course, then using a systematic approach based on past years' Derby contenders identify other talented colts moving up the ladder.
Did we miss one? Email editor Jonathan Lintner ([email protected]) if you know of a horse that should be on the radar.
• 2020 Kentucky Derby contenders