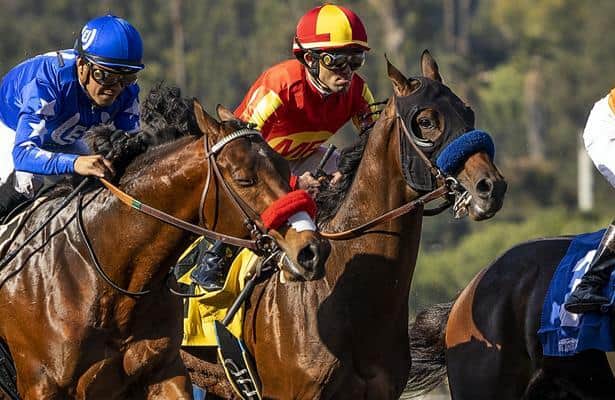 One of a few 2020 Kentucky Derby preps run over synthetic, this 1 1/8-mile event looks wide open as they chase a points payout of 10-4-2-1 to the top-four finishers. As with last year, the winner — if nominated to the Triple Crown series — will also receive a free entry to the Preakness Stakes.

Anothertwistafate was a prominent winner of the El Camino Real Derby a season ago. The connections of owner Peter Redekop and trainer Blaine Wright will be back in the running with his 3-year-old Hard Spun half-sibling, Ajourneytofreedom.

But Ajourneytofreedom, a maiden winner two starts back, carries in fewer credentials than his older stablemate. He was a beaten favorite in a Jan. 19 allowance flight, with the board hitters in front of him — The Stiff, Wine and Whisky and Mysterious Stones — also expected for Saturday’s race.

Three stand out coming from Santa Anita Park, according to a list of probables provided by Golden Gate’s stakes coordinator, Lisa Jones.

• Azul Coast, who runs for the same connections as top older horse McKinzie, looks like he wants all of this distance. Having debuted going a mile on Dec. 19 at Los Alamitos, the Super Saver colt circled his competition to win by four lengths. Back in the Jan. 4 Sham Stakes (G3) at the same distance, he ran into a potential monster in Authentic, running second by 7 3/4 lengths.

• K P All Systems Go took five starts to break his maiden, finally doing so when stretched to nine furlongs and added blinkers. He won that Jan. 25 flight by six lengths after a series of far less successful starts at a mile for trainer Jeff Mullins, who may have a live one thanks to the equipment addition.

• Czechmight was bought out of Keeneland’s November sale for $190,000 as a maiden winner on dirt in Kentucky who bloodstock agent David Meah said has the build of a turf horse. The Street Sense colt may find synthetic to his liking in a first start for the Richard Baltas barn. Last Saturday, he fired a half-mile bullet work in 47.40 seconds.

Other contenders include Sacred Rider, second in state-bred company in the California Cup Derby; Fly the Sky, who has won two of three climbing the ladder from claiming company; and Indian Peak, who two starts back defeated a number of expected El Camino Real Derby rivals in a 1-mile Golden Gate allowance race.

Entries will be taken and post positions drawn Wednesday for the El Camino Real Derby.