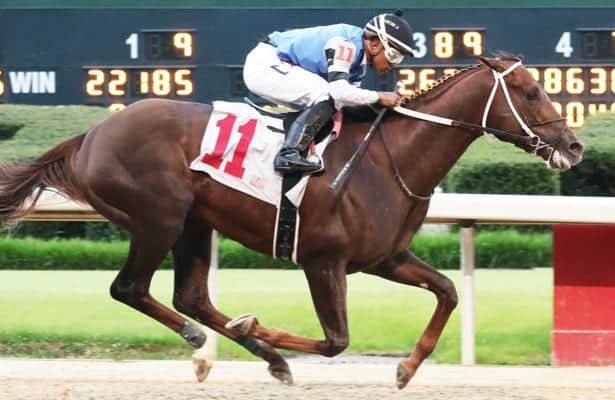 While attending 2018’s Keeneland September Yearling Sale, Alex Lieblong had more than one advisor tell him, “Hey, come look at this one.”

That one, a $425,0000 son of first crop sire Carpe Diem, went on to be known as Earner. And Lieblong, who campaigns the colt with his wife, JoAnn, is glad he stopped by.

A runner-up when going six furlongs on debut, Earner stretched out Saturday at Oaklawn Park to graduate going 1 1/16 miles and put himself under consideration for the season’s later 2020 Kentucky Derby preps — whenever they wind up running.

“He’s a big boy — kind of got the Baby Huey thing going — and I was really pleased, because coming out of the 11 hole I knew he was going to have to go to get position,” Lieblong said. “But I didn’t know whether or not we’d be able to turn him off, so to speak, after you told him to go.”

Under jockey Ricardo Santana Jr., Earner sent from his outside post and eventually settled in fifth up the back stretch, chasing opening fractions of 23.18 seconds for the quarter mile and 49.96 for the half.

Track announcer Vic Stauffer made it a point to say there were “many chances” as the field turned for home. But that was while Earner found himself still stuck in traffic, running three-wide throughout.

Steve Asmussen-trained Earner threw his hat in the ring over the weekend with a two-turn victory at Oaklawn Park that has his owner "dreaming."

“We got him up there in the right position,” the owner said, “and he kind of turned off and was happy to sit right there until Santana asked him to go. That’s something you always like to see. Half of them at that point — especially it being only his second race — you tell them to go, and it’s kind of hard to get them back in hand.”

Earner entered off a 2 1/2-length defeat first out on Jan. 18. That day, he sprinted and lost out to stablemate Echo Town, who has since won an allowance at Oaklawn Park that puts him in line to start in the April 25 Bachelor Stakes.

“The horse he went against there is freakishly fast for six furlongs, and he still showed himself well,” Lieblong said of Earner. “That set him up for this.”

As for what’s next, Lieblong, chairman of the Arkansas Racing Commission, said, “Bless all these racing jurisdictions’ hearts. Nobody knows what in the world we’re going to do.”

Earner figures to get his chance in summer stakes for 3-year-olds that this season will offer points to the postponed Kentucky Derby on Sept. 5.

“That’s the good part of the game,” Lieblong said. “It can keep you dreaming for a while.”