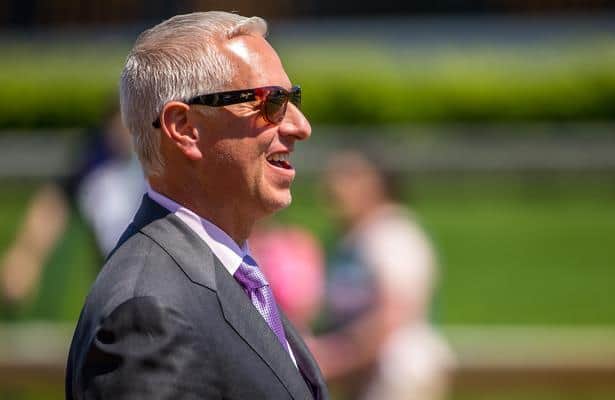 Two years ago it was Always Dreaming passing through allowance optional claiming company at Tampa Bay Downs on his way to the Kentucky Derby. Last year, Magnum Moon took that path as well.

So it's natural to anticipate Spinoff will head right down the 2019 Kentucky Derby trail after leading a field of five across the wire 11 3/4 lengths in front on Friday in another of those 3-year-old features for non-winners of two races.

The son of Hard Spun completed a mile and 40 yards in a snappy 1:40.25 under Hall of Fame jockey John Velazquez, who took off from potential mounts at Gulfstream Park to ride Spinoff at Tampa Bay Downs.

Trainer Todd Pletcher said a graded stakes race will be next.

“It looked like he was still figuring things out coming down the lane and running a little green, but what was impressive was that he finished well and had something left in the tank,” Pletcher said. "This is a colt we’ve always had high hopes for, and we thought we had him fit enough to go two turns today and that it could benefit him for something bigger and better down the road.

"Tampa Bay Downs has worked well for us (as a starting point). It’s a good, safe surface, and getting two-turn experience is very important looking ahead.”

Last seen in the Saratoga Special (G3) when third on Aug. 12, the Wertheimer and Frere (of Goldikova fame) homebred also won on debut last June 23 at Gulfstream Park.

Following the six-month layoff due to a "setback," Pletcher said, Spinoff ran close to a hot pace set by 7-1 shot Mercusio, who clicked off the opening fractions in 22.68 and 45.88. Midway up the back stretch, Velazquez pulled Spinoff out of that duel and redirected him from the rail to an outside position.

Spinoff rolled past his rival through the turn before Godolphin’s Cave Run ranged up to challenge. That one proved no match, either, once Velazquez worked into a vigorous hand ride then used a few taps of the whip to get Spinoff rolling again.

“He passed the other horses and got to the quarter-mile pole, and then he started waiting," Velazquez said. "Then he saw the gate (at the top of the stretch, along the outside rail) and he went to pull up and I said ‘Aargh, come on, pay attention.'

“Once he passed the gate, the other horse (runner-up Cave Run) kind came to him a little bit and he went on again. So it was a good effort.”

As with a number of Pletcher sophomores suddenly coming around — they always tend to do so this time of year — Spinoff should have a number of options, among them skipping straight into a major prep.

Thanks to XBTV, Friday's race isn't the only look we've got of the colt in the new year. Sunday's final breeze toward his season debut came in company with Gleason, a 4-year-old: 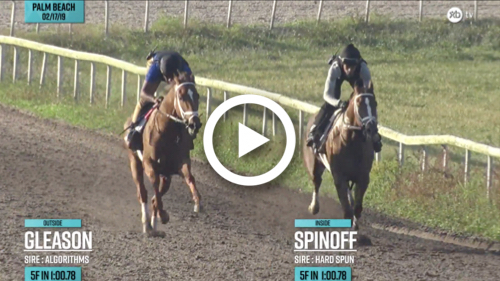 A rundown of Pletcher’s emerging 3-year-olds:

• Intrepid Heart one to watch after Oaklawn debut