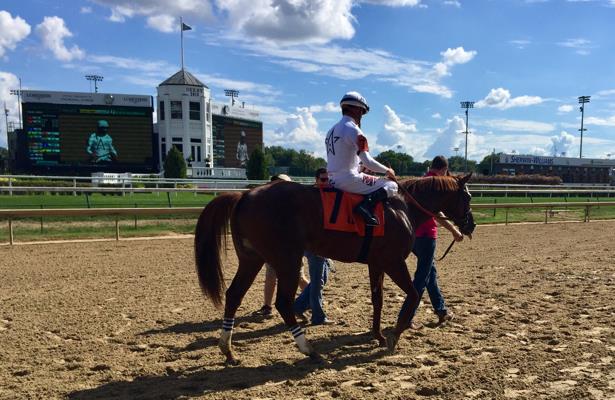 Churchill Downs split both its maiden special weight races for colts on opening Saturday of its September meet, giving us four chances to see rising star power under the Twin Spires. The last of them appeared to offer the best winner when it comes to the 2019 Kentucky Derby Radar.

Certainly, Preamble isn’t the best horse to don the No. 7 saddle towel with WinStar silks this year at Churchill Downs (remember the Derby?!). But he has the same original ownership group as Justify and could eventually stretch out for up-and-coming trainer Rodolphe Brisset.

“He’s been breezing faster than what we usually do,” Brisset said. “I’m still a 3 percent trainer first time. We were expecting a good run.

“…I think he showed something.”

Under jockey Corey Lanerie, the $225,000 son of Speightstown broke alertly, gained the lead midway through the race and galloped to a 1 1/2-length score. The horse he originally dueled with on the lead, Clench, faded to finish seventh.

Preamble is out of the Dehere mare Beautician, who ran fourth in the 2010 Kentucky Oaks. But she also posted her best speed figure at six furlongs.

Brisset reasoned that this colt could eventually stretch out his speed. First, he's a candidate to sprint at least once more.

"Then we'll see what happens," the trainer said.

If we learned something as well from Justify's Triple Crown run, it's that the connections of WinStar Farm, China Horse Club and SF Racing give their top stallion prospects these somewhat generic, yet strong-sounding names.

As for Quip, the Brisset-trained Tampa Bay Derby (G2) winner, he remains on the farm.

“We’ll get him back for the winter and look to map a 4-year-old plan,” Brisset said.

• Race 6: Moonster, second out for trainer Dale Romans, enjoyed the added distance as he stalked and pounced to win going a mile in 1:37.98. He took the smart money, too, bet down significantly from his 6-1 morning line odds.

Robby Albarado finished up under a hand ride as Keith Desormeaux-trained longshot Night Ops closed on the outside. To have Desormeaux horses in Kentucky this time of year is a credit to the upcoming Breeders’ Cup at Churchill Downs.

A son of Malibu Moon, Moonster prevailed by 2 1/2 lengths. The $80,000 purchase is campaigned by Calumet Farm.

• Race 4: Borracho, a son of Uncle Mo, was beaten twice at Saratoga but faced some talented horses including Endorsed, who’s on the Derby Radar. Stretching out from six furlongs to a mile did him good Saturday as he got the distance in Race 4 in a final time of 1:38.51 going one turn.

Jack Bohannon, assistant to trainer Rusty Arnold, said of Boraccho, "This was a big race for him today. We’ll just see how he comes out of it before we think about the next one. But we like this colt. He keeps getting better."

The runner-up from this flight is one to keep an eye on, too. Johny’s Bobby, a son of Hard Spun already making his fourth start, rallied from near the back of the pack.

• Race 1: The opener, a maiden special weight at six furlongs, didn’t turn much up on the Radar. Norm Casse-trained Distorted Jimmy prevailed, and Casse says the son of Jimmy Creed will likely continue sprinting.

» Horse: Preamble
» Horse: Moonster
About the Derby Radar
Back for the 2020 Kentucky Derby trail, Horse Racing Nation's Derby Radar seeks to identify promising maiden, allowance and even stakes winners who could target points-paying preps down the line. We'll cover the buzz horses, of course, then using a systematic approach based on past years' Derby contenders identify other talented colts moving up the ladder.
Did we miss one? Email editor Jonathan Lintner (jlintner@horseracingnation.com) if you know of a horse that should be on the radar.
• 2020 Kentucky Derby contenders