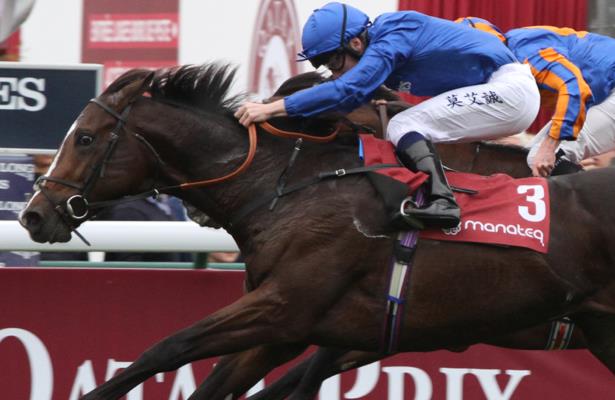 While Godolphin didn’t prevail in last weekend’s Prix de l’Arc de Triomphe, the undercard may have signaled the massive racing and breeding operation’s next hope of a Kentucky Derby contender.

The race’s purse of $2.5 million will make it the richest “derby” in the world next year. Of course, it also carries enough qualifying points to guarantee at least one and possibly two 2019 Kentucky Derby starters.

Royal Marine battled Broome to the wire at Longchamp, looking much the best by winning under little urging from jockey Oisin Murphy. The Group 1 victory came at a mile just one start after Royal Marine broke his maiden in a seven-furlong stakes at England’s Doncaster.

“He’s a big, strong horse who works well at home,” bin Suroor said afterward. “He showed some class there and travelled well the whole way.

"We’ll take him to Dubai now and he could start off there next season. He could be anything.”

For now, he’s certainly one to watch, with a UAE Derby prep known as the UAE Two Thousand Guineas a key race for him to make in February.

A son of Raven’s Pass, Royal Marine is his sire’s first Grade or Group 1 winner. Dirt may be a question, but the colt’s stride appears long, and Raven’s Pass has sired many winners at distance beyond a mile.

Broke maiden on major circuit (Not, at least, when it comes to Derby starters...)

Sire known for two-turn runners (The bigger question will be turf to dirt.)

» Horse: Royal Marine
» Race: Kentucky Derby (2019)
About the Derby Radar
Back for the 2020 Kentucky Derby trail, Horse Racing Nation's Derby Radar seeks to identify promising maiden, allowance and even stakes winners who could target points-paying preps down the line. We'll cover the buzz horses, of course, then using a systematic approach based on past years' Derby contenders identify other talented colts moving up the ladder.
Did we miss one? Email editor Jonathan Lintner ([email protected]) if you know of a horse that should be on the radar.
"  2020 Kentucky Derby contenders