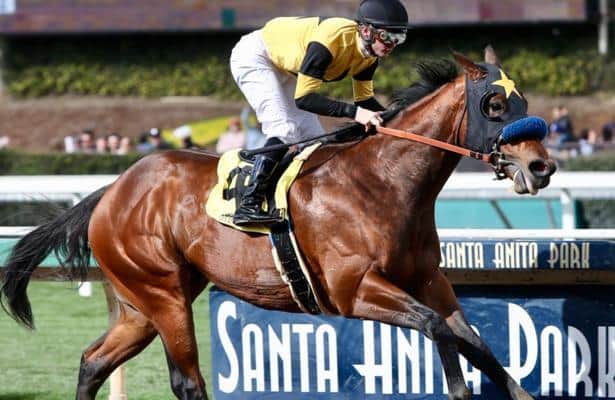 Owner West Point Thoroughbreds has announced Galilean, the multiple Cal-bred stakes winner moving on to the 2019 Kentucky Derby trail for his next start, is probable to ship to Arkansas for the March 16 Rebel Stakes (G2).

The son of Uncle Mo, who cruised to an easy 4 1/2-length win in Monday's California Cup Derby, joins an evolving cast of contenders for the $1 million race but won't completely dodge the imposing Bob Baffert barn by leaving Santa Anita Park.
While throughout the winter it was expected unbeaten Grade 1 winner Improbable would open his season in the Rebel, Baffert told the Daily Racing Form this week he's expecting to run that one against Game Winner at home in the San Felipe Stakes (G2) on March 9.

That makes Mucho Gusto, the last out winner of the Robert B. Lewis (G3), the other big Rebel Stakes shipper. Others under consideration for the race include Monday's Southwest (G3) hero Super Steed along with stakes winners Gray Attempt, Long Range Toddy and Frosted Ice.

Jerry Hollendorfer-trained Galilean has drawn comparisons to two-time Horse of the Year California Chrome given his race schedule to this point, as Chrome also won the King Glorious Stakes to end his juvenile campaign, then started his 3-year-old season in the Cal Cup Derby.
“The one thing that pops up in everybody’s mind is just how tough the competition was,” Terry Finley, president and CEO of West Point Thoroughbreds, said coming out of Monday's victory. “He was 1-9 for a reason. On paper he looked like he should be 1-9. We all know the pool gets very deep here.”
A $600,000 auction purchase, Galilean will get two chances to qualify for the Derby, going first in this prep that awards 50 points to the winner before taking on a major 100-point race.

Galilean is 3-for-4 in his career with his only defeat around one turn and to Cruel Intention, the Baffert trainee recognized recently as California's champion 2-year-old male.