Kentucky Derby 2019 Radar: Bourbon War back on the trail 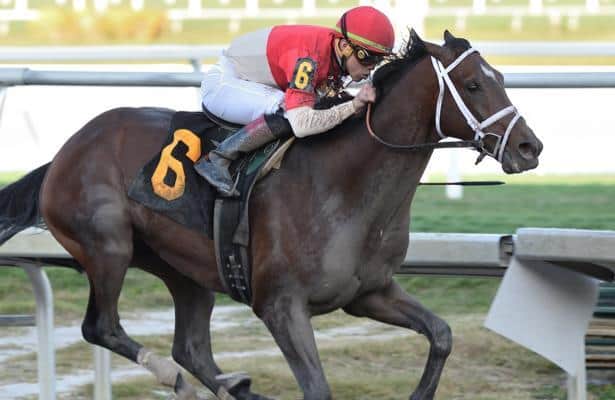 Irad Ortiz Jr. didn’t think Bourbon War ran poorly in the Remsen Stakes (G2) — only that due to a slow break and dawdling pace, the colt really didn’t get to run at all. The son of Tapit showed there’s plenty in reserve Friday afternoon in an impressive 3-year-old debut at Gulfstream Park.

Bourbon Lane Stable and Lake Star Stable’s Bourbon War dealt with traffic and dirt in his face before going on to a 2 1/4-length score in the featured ninth race, an allowance optional claiming event for 3-year-olds.

From here, it’s back on the 2019 Kentucky Derby trail.

That sets up Gulfstream’s Fountain of Youth (G2) on March 2 as a logical next spot.

“We’re going to see how it stacks up,” Hennig said, “but we’ll nominate him up to all these 3-year-old races. I think he’s ready to take the step back into graded stakes company.”

Bourbon War broke sharper than in his fourth-place Remsen effort, settling off the pace as a 3-2 favorite in the field of nine. He split horses up the back stretch before passing rival Cutting Humor to post a mile in 1:37.19.

“I was glad he kind of got through that little hole,” Hennig said. “I was like, ‘Is there a hole here turning for home, or not? Don’t get stopped.’ It worked out good.”

Bourbon War debuted Nov. 14 in a maiden special weight event at Aqueduct taken off the turf. In that race, he beat, among others, Moretti, a Todd Pletcher trainee who cost $900,000 at auction, graduated in his second start and is targeting the Withers Stakes (G3) next.

Given the strong first out showing, connections wheeled back Bourbon War for the Dec. 1 Remsen.

Even in defeat, “I was very positive with the horse,” Ortiz Jr. said Friday in a TVG interview.” I told Mark, ‘The slow pace killed me today, but next time, probably, with a fair pace he’ll give you a ride.’”

And Bourbon War did.

» Horse: Bourbon War
» Race: Fountain of Youth (2019)
About the Derby Radar
Back for the 2021 Kentucky Derby trail, Horse Racing Nation's Derby Radar seeks to identify promising maiden, allowance and even stakes winners who could target points-paying preps down the line. We'll cover the buzz horses, of course, then using a systematic approach based on past years' Derby contenders identify other talented colts moving up the ladder.
• 2021 Kentucky Derby contenders