East Coast scouting: Up to 10 contenders headed to Ky. Derby 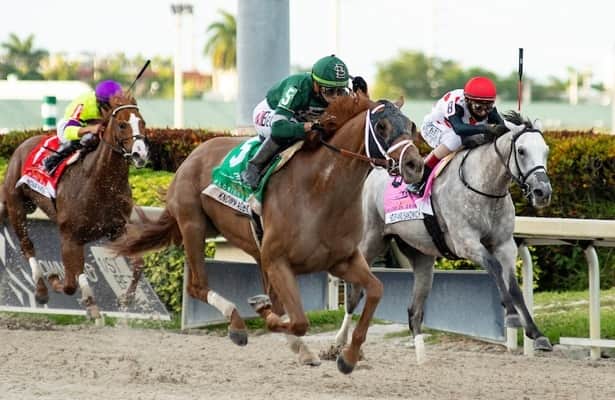 The East Coast division of the road to the 2021 Kentucky Derby wrapped Saturday with the Grade 2 Wood Memorial. It began on Oct. 10 with the Champagne Stakes (G1). In total, there were 11 official Derby points races that produced 10 different winners at four tracks – Aqueduct, Belmont Park, Gulfstream Park and Tampa Bay Downs.

In the five editions of this East Coast Scouting Report, 40 horses were mentioned as Kentucky Derby contenders, and 10 are left in the top 20 on the points leaderboard. Three of those horses – Known Agenda, Greatest Honour and Highly Motivated – were part of the first of the Scouting Report in December.

Bourbonic (100-1 - Bernardini – Todd Pletcher – Calumet Farm – 100, #4) A former $50,000 maiden claimer, this Calumet Farm home-bred colt upset the Wood Memorial (G2) at odds of 72-1, giving Pletcher an unexpected starter in the Run for the Roses. The 1 1/4-mile Derby distance will not be a problem for this son of Bernardini.

Greatest Honour – (14-1 – Tapit – Shug McGaughey - Courtlandt Farms – 80, #7) Greatest Honour is the only horse in the East Coast division that won two official Derby points races in the Holy Bull (G3) and the Fountain of Youth (G2). He was upset in the Florida Derby when he was stuck racing on the inside, had to deal with a lot of kickback, and ended up finishing third. Top horses overcome tough situations, and in that regard, he was a disappointment. Trainer Shug McGaughey will experiment with blinkers to try to make his colt more comfortable if he’s stuck in traffic.

Weyburn (100-1 – Pioneerof the Nile – Jimmy Jerkens – Chiefswood Stables – 60, #11) In the Wood Memorial, the Gotham (G3) winner pressed the early pace in second, held that position until the stretch when he was passed by the late runners and ended up in fourth. Weyburn was a late nomination to the Triple Crown races and might skip the Kentucky Derby to focus on the Belmont Stakes.

Highly Motivated (15-1 – Into Mischief – Chad Brown – Klaravich Stables – 50, #14) Highly Motivated made his 2021 debut in the Gotham in March, where he finished third almost two lengths behind the stretch duel between Weyburn and Crowded Trade. In the Blue Grass (G2), the Chad Brown runner set the pace, had the lead in the stretch, and then battled with unbeaten Essential Quality to finish a neck behind.

Helium (40-1 – Ironicus – Mark Casse – D. J. Stables – 50, #15) Unbeaten in three career starts, Helium raced only once this year, and that was in the Tampa Bay Derby (G2) where first place gave him enough points to get into the Derby. Trainer Mark Casse and New Jersey-based D. J. Stables decided to take the unconventional approach and train up to the first Saturday in May with only that one race.

Soup and Sandwich (45-1 – Into Mischief – Mark Casse– Live Oak Plantation – 40, #17) After winning his first two starts in Florida, Casse moved Soup and Sandwich to the Florida Derby, where at odds of 12-1 he pressed the pace, took the lead and finished second behind Known Agenda but ahead of Greatest Honour.

Dynamic One (125-1 – Union Rags – Todd Pletcher – Repole Stable, Phipps Stable, St. Elias Stable – 40, #18) Dynamic One showed up for the Wood Memorial on the heels of a maiden victory at Aqueduct in March going nine furlongs. He was sent off in the Wood at odds of 15-1 and like his stablemate he did not run like a long shot. The son of Union Rags had the lead down the stretch but got beat by a head right at the wire after he ran 43 feet farther than the winner, according to Trakus.

Crowded Trade (125-1 – More Than Ready – Chad Brown – Klaravich Stables – 40, #19) Crowded Trade got in the top 20 with a second and a third-place finish in the final two Derby preps at Aqueduct. In the Gotham, he pressed the pace going a one-turn mile; in the Wood, he rallied from eighth.

Sainthood (100-1 – Mshawish – Todd Pletcher – WinStar Farm, CHC Inc. – 40, #20) Sainthood trained for Pletcher in Florida, where he was second in his debut and then won at Fair Grounds. He was given a shot on the Tapeta surface in the Jeff Ruby Steaks (G3) and rallied late to run second just a length behind the winner. Sainthood might have been best that day after a troubled trip exiting the final turn caused him to get taken up when a hole closed. He got back in stride and was closing fast on the winner.

» Horse: Soup and Sandwich
» Horse: Weyburn
» Race: Wood Memorial (2021)
About the Derby Radar
Back for the 2021 Kentucky Derby trail, Horse Racing Nation's Derby Radar seeks to identify promising maiden, allowance and even stakes winners who could target points-paying preps down the line. We'll cover the buzz horses, of course, then using a systematic approach based on past years' Derby contenders identify other talented colts moving up the ladder.
• 2021 Kentucky Derby contenders