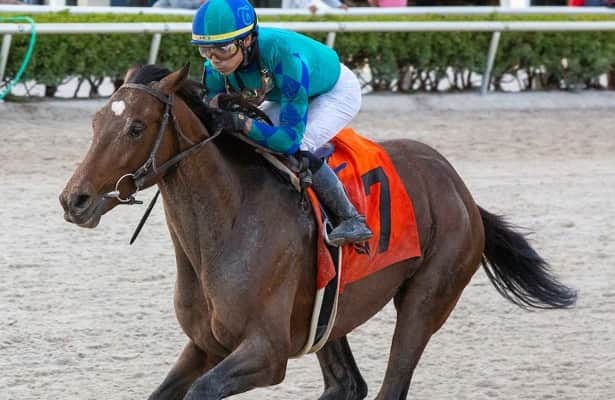 While Greatest Honor and Risk Taking are moving forward on the road to the 2021 Kentucky Derby, others are moving backward.

With only 80 days left until the Derby, the East Coast Scouting Report has had major revisions and now shows only 14 horses. Some 3-year-olds were dropped from the list because of injuries, poor performances, not being nominated for Triple Crown races or the fact that they have not returned to serious training. The status of others is unclear.

Greatest Honour – (12-1 – Tapit – Shug McGaughey - Courtlandt Farms - 10) Some racing fans had questions about Greatest Honour that possibly were based on the fact that the bay colt needed four tries to break his maiden. Those doubts were pushed aside when he made the Holy Bull (G3) field of nine look inferior as he took control of the race coming out of the turn and drew off to win by almost six lengths. The Beyer Speed Figure came back at 89, and his odds in Las Vegas-based Kentucky Derby futures dropped from 45-1 to 12-1.

Risk Taking (25-1 - Medaglia d’ Oro – Chad Brown – Klaravich Stables, LLC - 10) Chad Brown has a serious contender to win his first Kentucky Derby after Risk Taking rallied from sixth position to win the Withers (G3) by 3 3/4 lengths at Aqueduct. Since December, when Brown put blinkers on the $240,000 yearling purchase, he has two nine-furlong victories in New York. The Withers was assigned an 89 Beyer, and his futures odds moved from 120-1 to 25-1. Brown likely will leave Risk Taking at Belmont Park, skipping the one-mile Gotham, to train for the Wood Memorial (G2).

These contenders are stakes winners and/or already have earned Derby qualifying points. Listed in order by Derby points.

Capo Kane (50-1 – Street Sense – Bing Cherry Racing, L. Liberto - Harold Wyner - 12) – Capo Kane returned to Aqueduct after his big front-end victory in the Jerome and once again got loose on the lead. It appeared that the extra distance in the Withers took its toll as he was passed by two late runners to finish third. The Harold Wyner trainee now is in seventh position in the Derby points standings. Capo Kane is likely to start next in the Gotham (G3), which cuts back to a one-turn mile.

Candy Man Rocket (50-1 – Candy Man – Frank Fletcher Racing Operations – Bill Mott - 10) Trainer Bill Mott sent a pair of runners into the field of 12 in the Sam F. Davis (G3) at Tampa Bay Downs and both had serious questions to answer in the 1 1/16-mile race. Candy Man Rocket, who had just broken his maiden sprinting, took to the Tampa racing surface with a pace-pressing trip that produced a clear lead in the stretch and a final one-length margin of victory. His Beyer figure moved up from 83 to 85. Mott is expected to let him continue on the Derby trail, with the Tampa Bay Derby (G2) as his possible next start.

Jackie’s Warrior – (40-1 - Maclean’s Music - Steve Asmussen – J. Kirk and Judy Robison - 12) Jackie’s Warrior was the dominant 2-year-old in the East with four wins in his first four starts, including a Grade 2 and a pair of Grade 1s in New York. Hall of Fame trainer Steve Asmussen gave Jackie’s Warrior a break after finishing fourth in the Breeders’ Cup Juvenile (G1). He is expected to make his 2021 debut in the Southwest (G3) at Oaklawn Park on Monday.

Highly Motivated (30-1 - Into Mischief – Chad Brown – Klaravich Stables, LLC – 0) The promising victory in the Nyquist at Keeneland in November, which earned a 96 Beyer, was the last time that Highly Motivated was seen in a race. He returned to serious training with four workouts at Payson Park in Florida in the middle of January and is expected back in action in the Gotham.

These 3-year-olds all have earned Derby qualifying points.

Nova Rags (100-1 – Union Rags – Michael Shanley – Bill Mott - 4) Nova Rags was a rare debut winner on the dirt for Hall of Fame trainer Bill Mott at Belmont Park in October. After a fourth in the Nashua (G3) at Aqueduct, he went to Florida and won the seven-furlong Pasco at Tampa. In the Sam F. Davis (G3), he stalked the pace and finished second beaten only a length by his stablemate. Mott said he earned another start on the Derby trail.

Tarantino – (125-1 – Pioneerof the Nile – SF Racing, Starlight Racing, Madaket Stables, Stonestreet Stables, Golconda Stable, Siena Farm, Robert Masterson – Rodolphe Brisset - 4) Tarantino raced on the grass for his first three starts as a 2-year-old in California, which included a debut win at Delmar and a place finish in a stake at Santa Anita. With an ownership group that is loaded with big names, he made his dirt debut in the Holy Bull (G3) and was really the only horse running well except for the winner at the end as he finished second.

Overtook (75-1 – Curlin – Todd Pletcher – Repole Stabe, St. Elias Stable, Michael Tabor, Mrs. John Magnier, and D. Smith - 4) – The $1 million yearling broke his maiden with a late-running effort in his third try at Aqueduct in December. In the Withers, he broke slowly and hung out in last position in the early going but used a long, sustained rally to finish second behind one of the East Coast division leaders. His futures odds dropped in half to 75-1.

These 3-year-olds were disappointing in their recent starts, which puts their futures on the Derby trail in question.

Known Agenda (40-1 - Curlin – Todd Pletcher – St. Elias Stable - 2) This well-bred son of Curlin disappointed in the Sam F. Davis after running third in the Remsen (G2). He was far back in the field of 11, appearing to dislike the racing surface at Tampa, but eventually got running to finish fifth.

Prime Factor (25-1 - Quality Road - Todd Pletcher – CHC Inc. and WinStar LLC - 2) An impressive debut maiden victory at Gulfsteam in December propelled Prime Factor to be the even-money favorite in the Holy Bull. He sat in excellent position in third in the early going but then made no serious move down the stretch, ending up in the show spot beaten by 9 1/2 lengths.

These 3-year-olds earned a spot in the East Coast Report with impressive maiden victories, but time is now running short for them to be ready for a Derby prep race, let alone to earn enough qualifying points.

Promise Keeper (100-1 – Constitution – Todd Pletcher – Woodford Thoroughbreds, Win Star Farm) Promise Keeper was an impressive winner in his second start at Gulfstream when he won a one-turn mile by five lengths while racing on the lead from gate to wire.

Prevalence (16-1 – Medaglia d’Oro – Brendan Walsh – Godolphin) He broke his maiden with a front-end victory on Jan. 23 at Gulfstream by 8 1/2 lengths, earning an 89 Beyer. His  flashy win produced low odds in the futures offerings in Vegas. Prevalence is already back in serious training.