Derby Radar: Prevalence improves to 2-for-2 at Gulfstream 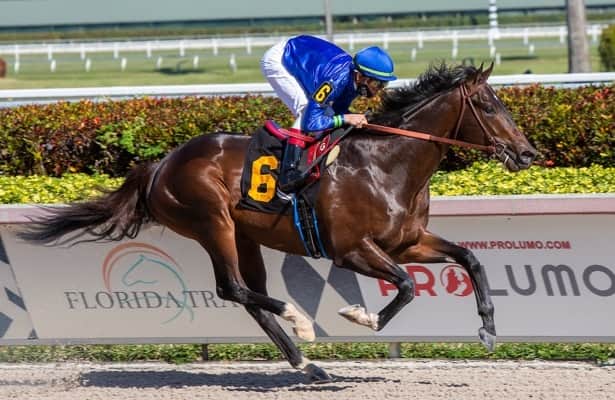 It is on to the Kentucky Derby trail for Prevalence after winning a one-mile allowance/optional claiming event at Gulfstream Park on Thursday to improve to 2-for-2.

A flashy 8 1/2-length debut winner at Gulfstream on Jan. 23, Prevalence was bet down to the 1-9 favorite in what was a belated first try against winners. The Godolphin homebred had been scheduled to run in a Gulfstream allowance two weeks ago, but that plan had to be scrapped after Prevalence spiked a fever and was forced to miss training time.

Breaking from the outside stall in a field of six Thursday, Prevalence and Tyler Gaffalione stalked a pace of 23.90 and 46.35 for the opening half mile while racing widest of all. Prevalence ranged up to pacesetter Tio Magico on the turn and, after reaching the quarter pole in a time of 1:10.74, pulled away in the stretch to score comfortably by three lengths. The official winning time was 1:35.82.

"I thought he ran really well," trainer Brendan Walsh told TVG from the winner's circle. "I'm glad we got to run in this race rather than throw him in the deep end [against stakes company] off just one start. I think it was important he got to do this today and it was a nice experience for the horse."

Prevalence will now be considered for one of three Kentucky Derby preps for his next start, Walsh said. However, those do not include the local Florida Derby (G1) on March 27 due to the short turnaround.

"Obviously it will be one of the later ones," Walsh said on TVG. "Possibly the Arkansas Derby, or the Wood [Memorial] maybe. A slight chance of the Blue Grass. I hate to say anything now, but when we get back we'll talk to the team and come up with a plan."

"We were just hoping he would take that next step forward; stretching out to a mile was a question, but he took everything in stride," Gaffalione said. "I really think he has a bright future. He got lost a little bit when he made the lead today, looking at the grandstand and things. But you know there is a lot left there. I'm hoping I get to the bottom of it one day."

Prevalence -- who is by Medaglia d'Oro out of the Ghostzapper mare Enrichment -- closed last weekend at 29-1 in pool 4 of the Kentucky Derby Future Wager.

In the William Hill Kentucky Derby Futures book, Prevalence is now the co-fourth choice at 12-1 with Concert Tour. They trail Life Is Good (7-2), Essential Quality (4-1) and Greatest Honour (6-1).

However, futures bettors take note: As of Thursday evening, Prevalence remained at 30-1 at Circa Sports.