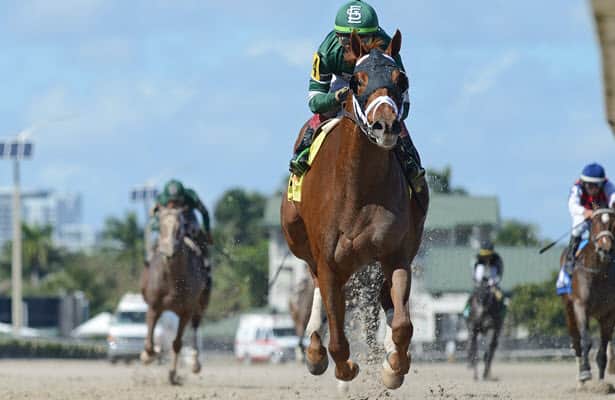 After a disappointing effort as the favorite in the Sam F. Davis (G3), St. Elias Stable's Known Agenda got back on the beam in a big way Friday at Gulfstream Park with a dominant first-level allowance win going 1 1/8-miles.

Known Agenda and Irad Ortiz Jr. settled in the second flight of the six-horse field behind fractions of 23.89, 47.89 and 1:11.94 for six furlongs. Entering the second turn, Top Gun Tommy and Paco Lopez made the first run to secure the lead, while Known Agenda was also starting to make up ground to his outside.

As that pair continued to duel into the top of the stretch Known Agenda dropped down in front of Top Gun Tommy and then drew away to score by 11 lengths in a final time of 1:50.47. Lopez would claim foul on Known Agenda for the close quarters at the top of the lane, but the stewards' ruled there would be no change.

Known Agenda, who was adding blinkers and Lasix for the first time, paid $3.00 as the odds-on favorite. He was followed across the wire by Top Gun Tommy, Warrior in Chief, Amount and All Bodes Well. It is likely now back on the Kentucky Derby trail for Known Agenda with the March 27 Florida Derby (G1) at Gulfstream the logical target.

Following the win, Known Agenda's Kentucky Derby odds at Circa Sports in Las Vegas were slashed from 150-1 to 60-1. Amount, also for Pletcher, drifted to 150-1 after previously trading at 80-1.