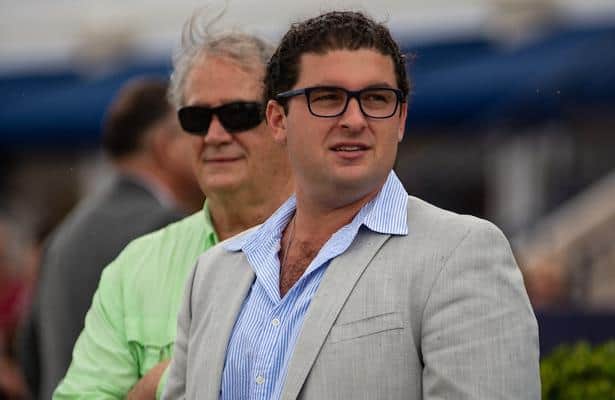 Collaborate, running for trainer Saffie Joseph Jr., broke his maiden on second asking when stretched out to a mile Saturday in a $55,000 race for 3-year-olds at Gulfstream, blowing away a field of 11 that included a half-brother of Charlatan.

By Into Mischief, Collaborate got off to a hot start under jockey Tyler Gaffalione, breaking from the fourth post position and taking the early lead. Collaborate took the inside position and dueled with King Force through the early quarters, knocking out fractions of 23.72, 46.57, 1:11.12 and 1:23.39.

Through the turn, Collaborate faced pressure from Bennyfromthebronx, the aforementioned half-brother of Charlatan, trained by Chad Brown. However, any chance that colt had was short lived as Collaborate romped down the stretch to earn a 12 1/2-length victory with a winning time of 1:36.35.

The race was a much improved performance from his debut race, a six-furlong affair at Gulfstream on Feb. 6, where he finished in fifth place. Following the win, Collaborate's Kentucky Derby odds were cut from 65-1 to 40-1 by Circa Sports in Las Vegas.

Bennyfromthebronx did well to rally for second after being shuffled to the back of the pack out of the gate, while Full Court Press completed the trifecta.

Out of the Quiet American mare Quiet Temper, Collaborate is owned by Three Chimneys Farm and e Five Racing Thoroughbreds. He was a $600,000 purchase by Mike Ryan, agent, at the August 2019 Fasig-Tipton Saratoga Select yearling sale. Collaborate returned $4.20 as the even-money favorite.