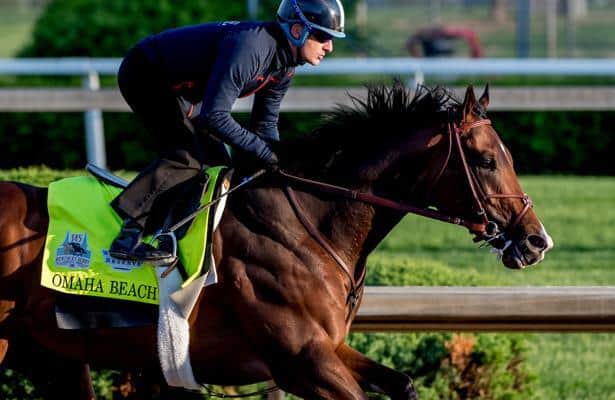 And…breathe. What a finish to a wild Wednesday leading up to the 2019 Kentucky Derby.

It started with attention on the Florida arrivals hitting the track — including Florida Derby (G1) winner Maximum Security and Blue Grass Stakes (G2) hero Vekoma — and ended with news that Omaha Beach has scratched due to an entrapped epiglottis, a respiratory issue.

That prompted more than one question…

Churchill Downs morning line maker Mike Battaglia quickly dropped Game Winner to the 9-2 top choice, with his Bob Baffert-trained stablemates Roadster and Improbable both 5-1. Battaglia said that were those three put in a joint entry, they’d be worth 6-5 or 7-5 to give the trainer his record-tying sixth Kentucky Derby victory.

2. Will Mike Smith miss the Derby?

The answer appears to be yes. While a trainer technically could bump a rider to bring in the Hall of Famer, most horses in the field are established stakes runners with jockeys who have stuck with them on the Derby trail.

With #KentuckyDerby favorite #OmahaBeach scratched, jockey #MikeSmith tells me "I'll be a glorified cheerleader" for co 5-1 2nd choice Roadster. He got off that colt to ride Omaha Beach.

The maiden Bodexpress now draws into the field from the also-eligible list. He’ll assume post No. 20, and those in spots 13-20 in the program will move in one spot. While post positions can change, program numbers do not.

With the scratch of Omaha Beach, Bodexpress will draw into the #KyDerby field and break from post position 20.

All horses outside of Omaha Beach (post positions 13-20) will move over one position in the starting gate. pic.twitter.com/lcODKQuSHA

4. Who benefits from Omaha Beach’s scratch?

Given the favorite was capable of pressing or setting the pace and sat outside a number of speed types, this development spells relief to contenders like Vekoma (No. 6) and Maximum Security (No. 7). War of Will from the rail is the one definitely trying to make the lead — and now he won’t have to fend off Omaha Beach’s strong middle move.

5. How does this affect potential payouts?

The Derby remains likely to produce big returns. With Game Winner, Roadster and Improbable all from the same barn, the public will be split in which Baffert it likes most rather than gravitating to one big horse like Justify. Generally, a favorite dropping out creates a case for more contenders — and parity on the tote board.

• HRN's Mark Midland gathered a number of Kentucky Derby trainer interviews on Wednesday morning at the barns. Tune in!

• In the daily update from Churchill Downs, Master Fencer's workout led the way, while trainer Todd Pletcher's contenders got on track.

• The Jockeys' Guild's president and CEO says the majority of Kentucky Derby riders will use a new cushioned whip in Saturday's race.

• With Omaha Beach out of the picture, here's something to think about: a proven formula tabs Improbable as the Kentucky Derby pick.

» Horse: Omaha Beach
» Race: Kentucky Derby (2019)
Horse Racing Nation's Kentucky Derby daily blog counts down to the May 4, 2019, race at Churchill Downs with a once-a-day update on all things Derby. Get the latest news and chatter, workout reports and a look at fields for upcoming preps all in once place.
• The full Derby Daily archive
• HRN's Derby contender rankings
• Derby points races and schedule
• HRN's Kentucky Derby Radar