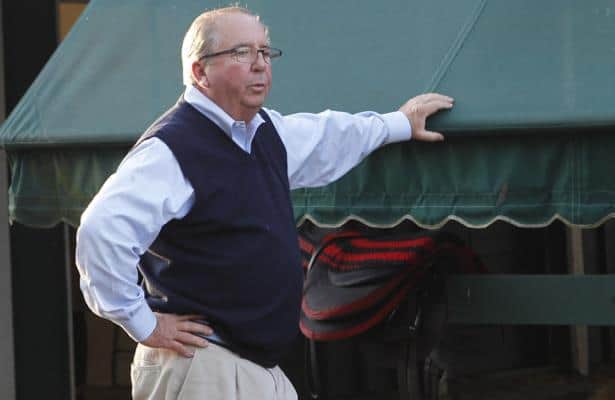 As Orb burst from the gates in the 2013 Kentucky Derby, Shug McGaughey had a different feeling than in his previous tries at his home state’s biggest race.

“When we came here with Orb, he was a story,” McGaughey said. “We knew he was a favorite.”

With that came pressure, and McGaughey delivered. He’s admittedly more laid back in his return to the Derby, this time set to saddle Code of Honor in an attempt to join the small fraternity of active trainers with multiple Derby wins.

The 3-year-old by Noble Mission followed the same route to Churchill Downs as Orb, earning his points through the Florida Derby (G1) and a win in the Fountain of Youth (G2). And now he’s housed in the same stall on the backside as McGaughey’s Derby winner.

“He’s a bit more of an efficient horse than Orb was,” said the 68-year-old trainer. “He’s got a nice way of moving. This horse is very efficient in what he does. He’s not big, by any means, but what he does, he does pretty easy.”

McGaughey added of Code of Honor, who completed preparations Sunday by breezing a half mile in 46.80, that “I think he belongs.”

“He’s kind of a middle of the pack, one-run type of a horse,” McGaughey said. “We need a little bit of pace, which we didn’t get in the Florida Derby, and that sort of took us out of our game plan.”

That day, Maximum Security took them gate to wire going through easy fractions. Two starts back, however, Code of Honor showed his potential when closing to win the Fountain of Youth.

“We got the pace we wanted, and it all worked out well,” McGaughey said.

“…Next Saturday, there will be some pace. Johnny Velazquez knows him, and I’m not worried about if things don’t go exactly right, at some point in the race, and him hitting the panic button or something, he’s going to know what to do. Just hopefully we’ll get a good pace and a clear run, and if we’re good enough, we’ll get there.”

McGaughey has saddled more than 9,600 starters in his illustrious career, with nine Breeders’ Cup wins, a Belmont Stakes victory with Easy Goer and horses with earnings topping $146 million.

“I haven’t won some races that I’d like to win,” he said, “but still, this is the main one, by far. I think it’s the atmosphere, the 20-horse field. The horse has to handle the week and mainly, they’ve got to be able to handle the day,” continued McGaughey, who mentioned he witnessed his first Derby in 1967 when Proud Clarion won it.

“They’ll walk over there in front of 160,000 people and it ain’t ever going to happen to them before or after. They just built it up into such a spectacular day to make a spectacular race. All the media hype, kind of being in a town like Louisville, where the town gets so behind it and everybody’s excited — it’s a very exciting week.”

Nowadays — with a Derby win to his name — it’s all a bit less stressful than six years ago.

“I think with Orb, I was a little bit uptight during the week,” McGaughey said. “I really wasn’t on Derby day. I’m going to be nervous as time goes on, but I’m pleased with the way things are going. (Code of Honor) won’t be the favorite. I wish he was the favorite, but he won’t be. We’ll see what happens.”

Orb, who now stands at Claiborne Farm, didn’t win again after the Derby. As for Code of Honor, the trainer says “he’s a late May foal, so I don’t think he is where he’s going to be one day.”

Six horses received No. 1 votes in the final edition of the Kentucky Derby Media Poll, with Omaha Beach leading the way.

A pair of workers, one at Churchill Downs (Long Range Toddy) and another in Florida (Maximum Security) rounded out Monday's Derby drips.

In case you missed it...

Sunday's Derby Daily report featured a conversation with a local meteorologist about the Derby day forecast.

» Horse: Code of Honor
» Race: Kentucky Derby (2019)
Horse Racing Nation's Kentucky Derby daily blog counts down to the May 4, 2019, race at Churchill Downs with a once-a-day update on all things Derby. Get the latest news and chatter, workout reports and a look at fields for upcoming preps all in once place.
• The full Derby Daily archive
• HRN's Derby contender rankings
• Derby points races and schedule
• HRN's Kentucky Derby Radar