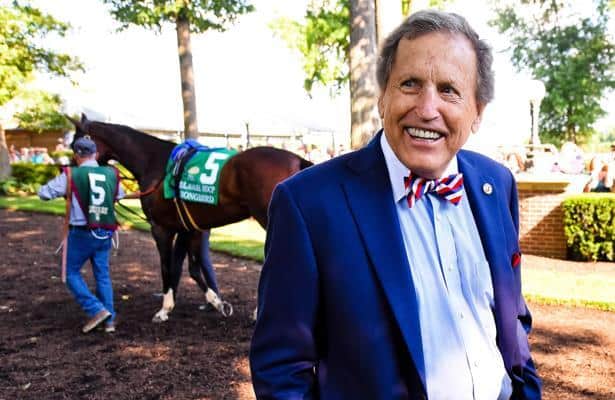 Much like Richard Mandella, trainer of Omaha Beach, the colt’s owner has assembled a horse racing resume complete with just about every major accomplishment except a Kentucky Derby win.

Campaigning horses under the Fox Hill Farms banner, Rick Porter's accolades are too long to list with champions Havre de Grace and Songbird among his former runners. Porter also came close in the Derby with back-to-back runner-ups Hard Spun (2007) and the ill-fated Eight Belles (2008).

He’s back with the early favorite this time, and admitted this week on a national media teleconference that “it makes me real nervous when we’ve got all this hype about him.”

“This might be my last shot, but I think every owner would like to win the Kentucky Derby,” said Porter, whose Omaha Beach enters off victories in Oaklawn Park’s Rebel Stakes (G2) and Arkansas Derby (G1). “I know Dick Mandella wants to win. We’re both virgins, so hopefully this will take care of both of us.”

For Porter, 77, the matter may be more dire. Omaha Beach was among the group of yearlings he purchased in 2017 following a two-year battle with cancer that entered remission thanks to an experimental treatment.

“We’ve had good fortunes with a lot of horses. We’ve won a lot of big races,” Porter said. “This would be the icing on the cake.”

A son of War Front, Omaha Beach came to Porter as a private purchase after he failed to meet reserve in the auction ring. While Omaha Beach didn’t vet will for other potential suitors, the noted Dr. Larry Bramlage advised him: “Don’t let this interfere” with the decision.

In hindsight, Porter wonders whether Omaha Beach should have sold for millions. But an issue that wound up minor kept larger industry players from entering a bidding war.

“It really came at the right time for me,” Porter said, “and I’m just very fortunate.”

Porter said he requested Mandella give dirt a try in the new year. At second asking on the new surface, Omaha Beach broke his maiden by nine lengths, leading to the Derby trail. And if you told Porter back in September of 2017 that this would be the horse giving him a huge chance on the first Saturday in May?

“Total shock and disbelief,” he said.

Omaha Beach, who has stabled at Churchill Downs since his last out win, is scheduled to work Saturday with jockey Julien Leparoux up. Mandella had Mike Smith scheduled to arrive for a Friday breeze, but overnight rain left the track less than fast going into Friday’s training hours.

• For updates on other contenders, Churchill Downs’ Friday Kentucky Derby news and notes are available, featuring an interview with War of Will trainer Mark Casse.

• Meanwhile, Japan’s contender, Master Fencer, has cleared quarantine and began a unique run up to the Derby by training Friday at Keeneland.

• Here’s some quality listening: NBC Sports’ Randy Moss joined the Horse Racing Talk podcast, giving his opinions on most in the Kentucky Derby and Oaks fields.

• If you’re like us and already thinking about that superfecta ticket, read up on the Kentucky Derby longshot you can’t dismiss from wagers.

Thursday’s Derby Daily report told of Brendan Walsh’s emotional month training Plus Que Parfait up to to the May 4 race.

» Horse: Omaha Beach
» Race: Kentucky Derby (2019)
Horse Racing Nation's Kentucky Derby daily blog counts down to the May 4, 2019, race at Churchill Downs with a once-a-day update on all things Derby. Get the latest news and chatter, workout reports and a look at fields for upcoming preps all in once place.
• The full Derby Daily archive
• HRN's Derby contender rankings
• Derby points races and schedule
• HRN's Kentucky Derby Radar