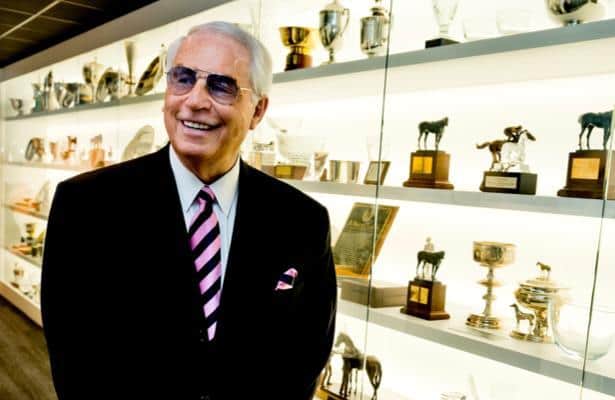 D. Wayne Lukas likes to joke that he’s the “worst handicapper of all time.” But there’s a reason why reporters keep going back to the legendary trainer to talk Kentucky Derby — even when Lukas doesn’t have a horse in the race.

Continuing to train aboard a pony each morning, Lukas has viewed the contenders for Saturday’s race and came to this conclusion, in an interview with XBTV’s Zoe Cadman:

“I think it’s California dreaming this year,” Lukas said. “I like the California horses.”

Lukas beat the drum of Justify throughout the Triple Crown as when it appeared the competition was catching up following a tight finish with his horse, Bravazo, in the Preakness Stakes.

As for his comments on this year’s bunch, the interview happened before morning line maker Mike Battaglia set Omaha Beach, Game Winner, Roadster and Improbable as the Top 4 choices before betting opens.

Lukas said Baffert is “clearly the best trainer in the world,” adding that “he knows what to do with those three, and they’re going to be tough

“ Then you put a Hall of Famer like Richard Mandella in there with Omaha Beach, now you’ve got four really nice horses. I think if you box those, you’re probably going to get the winner.”

For an outsider, Lukas settled on the Shug McGaughey-trained Code of Honor. He has Omaha Beach as his win pick — and Lukas is known to make a play here or there.

“Mandella’s horse, Omaha Beach, has got the most temperament for it,” Lukas told XBTV. “…I watch him out here — he’s handling it well. His weight looks good. He’s doing very well, and Richard’s an outstanding trainer. He will have him ready on the given day.”

And if that’s the case, you can look for Lukas at the windows.

• NBC has set 18 hours of Kentucky Derby week TV coverage, plus lists what’s to come throughout the Triple Crown series.

• Columnist Chip Gehrke mentions a Kentucky Derby wagering strategy we have to share. It’s party-friendly for those watching with friends.

Monday’s Derby Daily featured McGaughey’s thoughts on a relaxed return to Churchill Downs with his first Derby contender since Orb won it in 2013.

» Race: Kentucky Derby (2019)
Horse Racing Nation's Kentucky Derby daily blog counts down to the May 4, 2019, race at Churchill Downs with a once-a-day update on all things Derby. Get the latest news and chatter, workout reports and a look at fields for upcoming preps all in once place.
• The full Derby Daily archive
• HRN's Derby contender rankings
• Derby points races and schedule
• HRN's Kentucky Derby Radar

Zandon’s owner seeks another ‘cool’ experience in Cigar Mile
Jeff Drown said it was a tough question. As the ow...
x