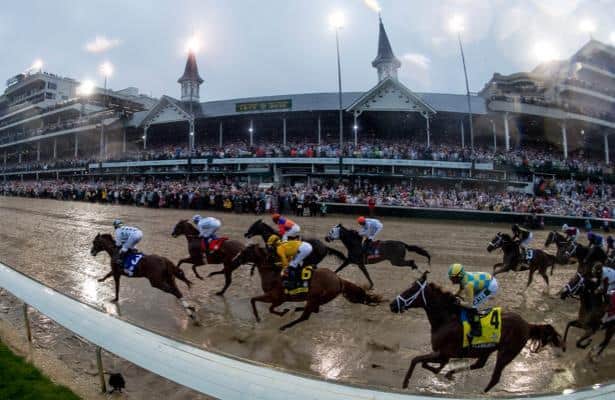 Jude Redfield, a Louisville, Ky.-based meteorologist who forecasts for FOX affiliate WDRB, predicts either of two scenarios for weather on 2019 Kentucky Derby day. Thankfully, neither involves the type of precipitation seen last year.

“That’s fresh on everyone’s mind about how it was a record rain of more than three inches,” he said. “It’s unfortunate that happened.”

This time, Redfield said, a front currently to the northwest will determine whether we have a fast track on Derby day. The system is expected to stall in the region mid-week, but for how long?

“If that front lingers, it’s warm but we have a rain chance,” Redfield said of Derby day. “Scenario 2 is, there’s not a chance of rain at all, but it would be cooler with sunshine. Afternoons would be in the 60s. We’re not talking snow or anything.”

So it’s just a matter of timing. A combination of models, including America’s Global Forecast System (GFS), are pointing to good news.

“As of now the front would move South of the area to where we dry out,” said Redfield, who added that temperatures then wouldn’t be high enough to create the type of “popup-style thunderstorms” so common in the spring.

Redfield predicts highs near or in the 80s through most of the week, at least until that front passes through. It could rain on Churchill Downs’ “Thurby” day on Oaks day, too.

Let’s get the showers out of the way, right?

“The best-case scenario is the front comes through on Oaks day,” Redfield said. “There’s be a rain and thunderstorm chance, but it would clear out by Derby. One out of two ain’t bad.”

Warmer this week with a few chances for light rain - the greatest chances will be Thursday through Friday morning. #KYwx #INwx pic.twitter.com/B869gvLXXr

• It’s the work that had Churchill Downs buzzing as Win Win Win hooked up with the Bill Mott duo of Country House and Tacitus in Sunday’s final breeze. You can replay it with some analysis here.

• Details are set for the Kentucky Derby post position draw with information now available for when and where to tune in.

• HRN’s Bryan Brinkmeyer successfully isolated Justify and Audible last year with his 5 key trends to picking a Kentucky Derby winner. Who sticks out this time?

Saturday’s Derby Daily report featured highlights from a conversation with trainer Bob Baffert about his chase for a record-tying sixth victory.

» Race: Kentucky Derby (2019)
Horse Racing Nation's Kentucky Derby daily blog counts down to the May 4, 2019, race at Churchill Downs with a once-a-day update on all things Derby. Get the latest news and chatter, workout reports and a look at fields for upcoming preps all in once place.
• The full Derby Daily archive
• HRN's Derby contender rankings
• Derby points races and schedule
• HRN's Kentucky Derby Radar