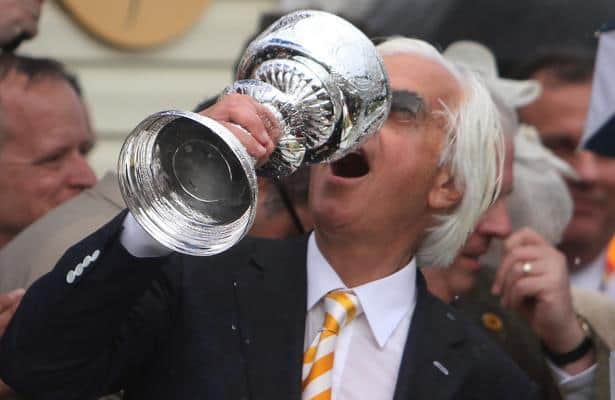 A bit later in the morning at Churchill Downs, a larger pack of reporters gathered around Barn 33, where fellow Hall of Famer Bob Baffert held court for closer to a half hour. That’s even though his on-site contender, Improbable, doesn’t breeze until Sunday, and his other two runners — Roadster and Game Winner — wouldn’t arrive until the afternoon.

Two Triple Crowns later, Baffert’s stories continue to resonate. He says the first of the classics is also “still the one” he wants most. Again.

“I think the Triple Crown was like — I mean, it’s great also,” Baffert said. “But there’s something about the Derby. I could win the Derby and just go home. That’s the kind of race it is.”

A victory this year would mean history for the white-haired conditioner, who jokingly measured his fame Saturday by how he’s recognized in the airport.

One more win — a sixth — would do more than fill the signage on the side of Baffert’s barn. Only “Plain” Ben Jones has won more than five Derbys, with Whirlaway and Citation among his victors from 1938-1952.

“Ben Jones — the golfer?” Baffert quipped. “I just know what you guys tell me about him. That was a different era. I don’t think about things like that. I hate thinking about things. Then I feel like I’m getting super jinxed.”

It’s safe to say Baffert won’t go down in racing history with a nickname anything close to “Plain.”

How about “Humble Bob Baffert?” he asked.

That may have been tongue in cheek...

Baffert’s first Derby score came in 1997 with Silver Charm. After triumphing in three of seven years, he went winless from 2003-2014.

“I could have easily won eight of these, you know?” Baffert said.

Cavonnier, Lookin At Lucky, Pioneerof the Nile and Bodemeister come to mind.

“I could have lost another two,” Baffert added. “I got lucky, too. It’s one of those things where I believe in fate. It’s meant to happen.”

He has said much about this year’s group, and more is on the way. Asked to run them all down Saturday, Baffert said, “We’d be here all day. One’s gray (Roadster). One’s chestnut (Improbable). And one’s a bay (Game Winner).”

“They’re all coming off strong performances,” Baffert said. “Two of them got beat. Roadster — he’s undefeated this year. He’s the only one that Omaha Beach hasn’t beaten, so we have that going for us. They’re good horses. They belong. I think a lot has to do with post position. We have to wait for that, then racing luck.”

And possibly some history.

• For more on the news of the day, watch Omaha Beach’s final Kentucky Derby breeze, with comments from Mandella.

• War of Will attempted to steal the show Saturday with his own final move that left trainer Mark Casse gushing.

• As for other contenders, check out Churchill Downs’ full Saturday Kentucky Derby update.

• Post times for the main features and the Kentucky Derby wagering menu are set.

Friday’s Derby Daily report featured Rick Porter, the owner of Omaha Beach who battled cancer and said this colt came around for him at the right time.

» Horse: Improbable
» Horse: Game Winner
» Race: Kentucky Derby (2019)
Horse Racing Nation's Kentucky Derby daily blog counts down to the May 4, 2019, race at Churchill Downs with a once-a-day update on all things Derby. Get the latest news and chatter, workout reports and a look at fields for upcoming preps all in once place.
• The full Derby Daily archive
• HRN's Derby contender rankings
• Derby points races and schedule
• HRN's Kentucky Derby Radar