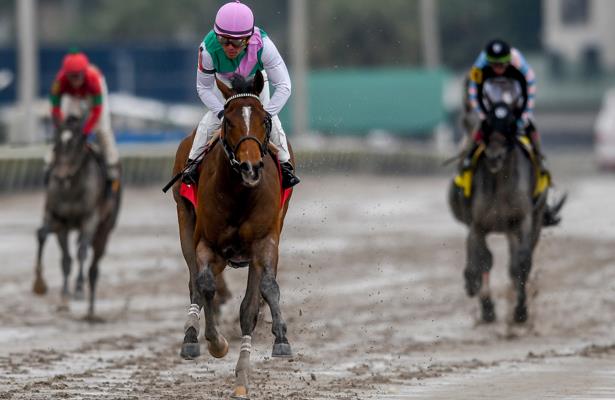 Depending on where you looked following Hidden Scroll’s debut, he compared at this stage in his career to any of Elusive Quality, Curlin or, going back only a year, Justify.

OK, I’m guilty of the last one.

The figure makers agree that what we saw Saturday on the Pegasus World Cup undercard was at worst a one-off freak performance in the speed-favoring slop and at best a historic mile in 1:34.82. From here, Hidden Scroll’s eligible for those 2019 Kentucky Derby lists.

“It wasn’t a surprise that he won,” trainer Bill Mott said Sunday morning. “We were thrilled with the way he did it.”

According to the Daily Racing Form’s Brad Free, the number was also best by a 3-year-old in January since Upstart’s 105 from the 2015 Holy Bull.

Mott said “we’re undecided” so far as to what could be next for the Juddmonte Farms homebred, whose breeding speaks to how Hidden Scroll handled the Gulfstream Park slop. He’s by Hard Spun and out of an Empire Maker mare.

“There’s a lot of difference between running well and being ready to run in the Kentucky Derby,” Mott said. “But it was an impressive race.”

The Beyer number ranked behind only three other horses that ran Saturday at Gulfstream: Pegasus heroes City of Light and Bricks and Mortar, and the top sprinter World of Trouble, who won a main track edition of the Gulfstream Park Turf Sprint with ease.

Hidden Scroll also notched a 119 from TimeformUS — better than four stakes winners on the Pegasus card — and 115 from Equibase. As the hype builds, Mott’s advice for people?

“Let them make their own minds up,” he said with a laugh. “As impressive as he was, we’ll go a step at a time. Fortunately, I’ve got another horse for Juddmonte we think is a pretty nice horse and already has a couple races under his belt. So we’re glad to have two of them for Juddmonte who look like top-class horses.”

He was speaking of Tacitus, the first foal out of champion Close Hatches who broke his maiden in November and is back to work. So, too, is Mucho, the Hopeful Stakes (G1) runner-up. Mott also saddled impressive last-to-first maiden winner Country House on Jan. 17 at Gulfstream.

The Hall of Famer is looking loaded with this 3-year-old class — and seeking to fill a void on his resume in the Derby. By the way, Mott’s 2018 runner, Hofburg, will campaign at 4.

“He’ll probably come back to us sometime this month,” Mott said.

• In case you missed it, Saturday’s Derby Daily report honed in on what’s next for Win Win Win, mentioned above. He’s going in a prep race next at Tampa Bay Downs.

• A couple days after Justify was named Horse of the Year, trainer Bob Baffert reflected on what it took to get the colt through the Triple Crown, saying he was “fortunate everything worked.”

Gun It — The $2.6 million member of Gun Runner’s family is back on the work tab after running third in a recent Fair Grounds allowance event. Maybe that was good enough to send him on to the Risen Star (G2). Sunday’s breeze was clocked at 50.40 for a half mile.

Gunmetal Gray — The Sham Stakes (G3) winner is likely to return next weekend in the Robert B. Lewis (G3), with an easy six furlongs serving as his final breeze. He went in 1:15.20 on Sunday at Santa Anita.

Moretti — A headliner for next weekend’s Withers Stakes (G3), the Todd Pletcher trainee tuned up Sunday at Belmont Park, where he drilled a four furlongs in 49.92 seconds over the training track. This one cost $900,000 and broke his maiden last out.

Signalman — The Kentucky Jockey Club Stakes (G2) winner, also on the board in the Breeders’ Cup Juvenile, posted his first work of the year Saturday at the Payson Park Training Center, where he breezed three furlongs in 39.80 toward the Fountain of Youth (G2).

» Horse: Hidden Scroll
» Race: Kentucky Derby (2019)
Horse Racing Nation's Kentucky Derby daily blog counts down to the May 4, 2019, race at Churchill Downs with a once-a-day update on all things Derby. Get the latest news and chatter, workout reports and a look at fields for upcoming preps all in once place.
"  The full Derby Daily archive
"  HRN's Derby contender rankings
"  Derby points races and schedule
"  HRN's Kentucky Derby Radar