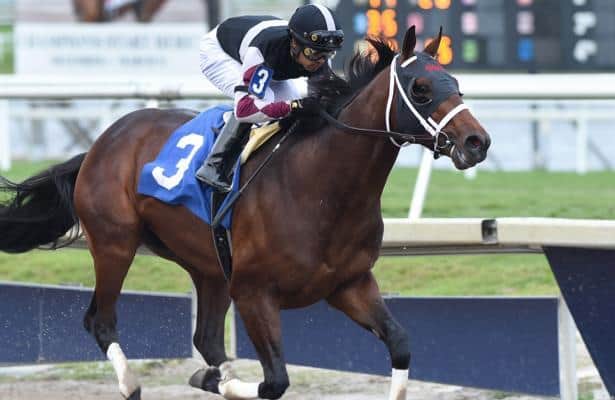 As Sagamore Farm President Hunter Rankin combed through entries for the 2017 Keeneland September Yearling Sale, he came upon a Book 2 horse sporting a Book 1 pedigree, evidenced by its half-brother Bolt d’Oro’s Grade 1 victory days earlier in the Del Mar Futurity.

Luckily for Rankin, that information didn’t make it on the sales page. Sagamore snagged a son of Curlin out of the A.P. Indy mare Globe Trot, who would go on to be known as Global Campaign, for $250,000.

“I think if he maybe had sold a month or two later, we wouldn’t have been able to afford him,” Rankin said.

Connections wouldn’t be in an exciting position on the 2019 Kentucky Derby trail, either, with their colt 2-for-2 entering Saturday’s Grade 2, $400,000 Fountain of Youth Stakes at Gulfstream Park.

Global Campaign debuted Jan. 5 an easy 5 3/4-length winner and returned Feb. 9 to coast to a 2 1/4-length victory under wraps going the Fountain of Youth distance at Gulfstream in 1:44.29.

“We feel like he’s done really, really well since the race,” Rankin said. “It didn’t take anything out of him. We’ve always kind of said if he did what he has over the last couple of weeks we’d lean toward the Fountain of Youth because there’s more known.

“He’s gotten over the racetrack well previously. He can go in the same stall he’s gone into and have his same routine.”

That has proved a winning one for Global Campaign and trainer Stanley Hough. Interestingly enough, breeder WinStar Farm bought a piece of the colt back after the sale, and jockey Luis Saez will don those green and white silks Saturday. You only have to go back a season to see the success that operation had getting a Triple Crown hopeful started after the new year.

As with most who debut post-Jan. 1, Global Campaign trained for races long before then. He began breezing in the spring, and even then Rankin saw the horse “head and shoulders” above his company.

“And we worked him with some nice horses,” Rankin said.

A setback — no surgery was required — warranted 60 days off.

“Then it was difficult to get him into a good training routine because he is all horse,” Rankin said. “He’s a true colt. But he’s matured so much between his first race and second race — and even second to third.

“We’re just happy that he’s shown so far what we thought he could do, and obviously we’re hopeful about Saturday as well.”

Neither Global Campaign’s 73 Beyer Speed Figure from his last race nor his 10-1 morning line odds peg the colt as a top Fountain of Youth contender. Visually, his races have been among the most impressive by any in the field, the flashy Hidden Scroll notwithstanding.

Rankin said Global Campaign tends to run hard until he gets the lead, then relaxes. There’s hope that bodes well from connections as the distances increase.

“He’s just blossomed into such a beautiful horse,” Rankin added, especially since hammering for a quarter million at the sale.

• We’ll start with the Derby trail news of the day. The Daily Racing Form’s David Grening reports that Instagrand will reroute from the San Felipe (G2) to the Gotham Stakes (G3) for his 3-year-old debut, remaining around one turn.

• Hidden Scroll sits at 9-5 on the Fountain of Youth morning line, and handicapper Reinier Macatangay is buying the hype. Here’s why he’s OK with that price for Saturday’s race.

• There’s a Derby trail race to tune into before the Fountain of Youth as Ireland’s Dundalk Stadium on Friday hosts the Patton Stakes. Mendelssohn’s connections are chasing a repeat.

Bob Baffert sending out two of his talented 3-year-old runners in Race 8 this Friday, March 1 at Santa Anita Park.

Hear what he has to say about #4, Roadster & #6, Dessman below & be sure to tune-in for the race live with us on TVG. pic.twitter.com/LNMr1xK9Jf

» Horse: Global Campaign
» Race: Fountain of Youth (2019)
Horse Racing Nation's Kentucky Derby daily blog counts down to the May 4, 2019, race at Churchill Downs with a once-a-day update on all things Derby. Get the latest news and chatter, workout reports and a look at fields for upcoming preps all in once place.
• The full Derby Daily archive
• HRN's Derby contender rankings
• Derby points races and schedule
• HRN's Kentucky Derby Radar