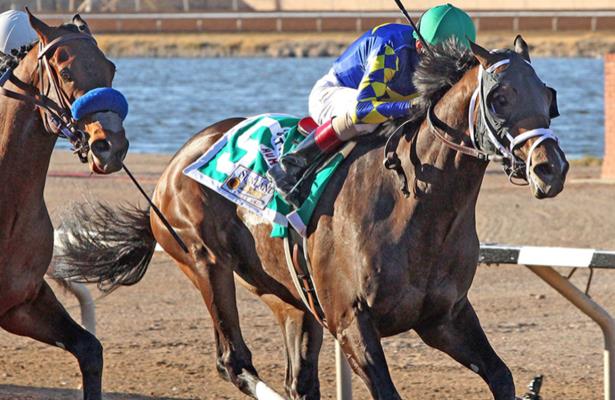 Entering the Sunland Derby (G3), Jack Wolf, head of the Starlight Racing partnership, didn’t believe the group had a 2019 Kentucky Derby horse in Cutting Humor. Even after the colt won on March 24 in a track-record time, Wolf still knew the son of First Samurai had to prove himself to Todd Pletcher, as the trainer’s 3-year-olds always do this time of year.

And as of this week?

Cutting Humor could ship in next week for a final workout at Churchill Downs, but Wolf considers it more likely the colt arrives on an April 30 flight because “he’s doing so well where he is.”

Two starts back, Cutting Humor broke as the Southwest Stakes (G3) favorite at Oaklawn Park having exited a runner-up in allowance company at Gulfstream Park to open his season. That day, Cutting Humor carried jockey John Velazquez wide into the first turn. Those issues were cured when he nipped Anothertwistafate by a neck at Sunland Park.

“If you draw a line through the Southwest, which I have a tendency to do — of course, I’m prejudiced — then you can make a case,” Wolf said of Cutting Humor’s Kentucky Derby candidacy.

It doesn’t hurt that the future Hall of Famer Pletcher feels the same.

“He was commenting on how equal most of these horses’ numbers are,” Wolf added. “It’s not like you’ve got a Justify — a horse like that standing out from a numbers standpoint. Who gets the trip and can jump up on the day?”

Pletcher also trains the Louisiana Derby (G2) runner-up Spinoff, who had Velazquez up for his final prep. Manny Franco will ride on the first Saturday in May with Velazquez staying loyal to Code of Honor and trainer Shug McGaughey. A rider has not been announced for Cutting Humor.

• For more on Spinoff, check out a feature on Franco, who’s jet-setting to keep the mount, with video of his Friday work toward the Kentucky Derby.

• War of Will was on the work tab elsewhere, at Keeneland, where “all systems are go” exiting Friday’s breeze at Keeneland.

• On a new HorseCenter show, hosts Brian Zipse and Matt Shifman discuss the Derby preps that should prove most productive.

Thursday’s Derby Daily report featured an update on Gray Magician, who appears to be the only horse in the current Top 20 in points with connections not committed to run.

» Horse: Cutting Humor
» Race: Kentucky Derby (2019)
Horse Racing Nation's Kentucky Derby daily blog counts down to the May 4, 2019, race at Churchill Downs with a once-a-day update on all things Derby. Get the latest news and chatter, workout reports and a look at fields for upcoming preps all in once place.
• The full Derby Daily archive
• HRN's Derby contender rankings
• Derby points races and schedule
• HRN's Kentucky Derby Radar