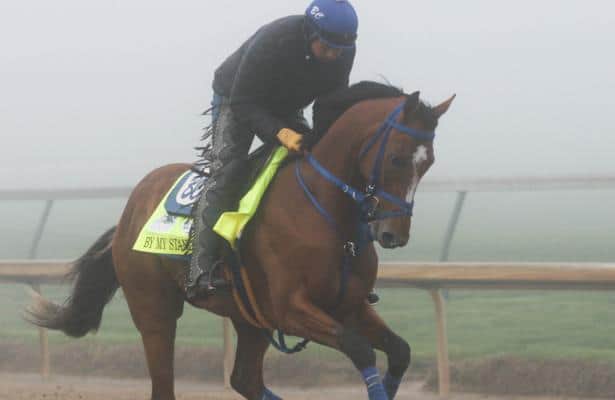 The weeks between By My Standards’ Louisiana Derby (G2) win and his step up in the 2019 Kentucky Derby have offered context to the frustration trainer Bret Calhoun felt until the colt broke his maiden.

Since getting the son of Goldencents into serious training, By My Standards has showcased a workout stride that looks as easy as a gallop. Finally, at fourth asking on Feb. 16, that talent translated to the afternoon, and the next time out the Allied Racing charge punched his Derby ticket.

“I think if anybody watches those works you’d be very impressed,” Calhoun said this week after By My Standards breezed through six furlongs in 1:12.80. “…I think that’s what everybody likes about him. It’s what I like about him, so obviously he’s moving across this track very well.”

And the buzz continues to build, with By My Standards looking like the wise-guy contender. Seemingly each year there’s the horse who arrives to Churchill Downs, takes especially well to the surface and sparks debate about whether he can out-run his odds.

“You want to see him getting over the track in the morning. That is a big part of it,” Calhoun said. “But when you put 20 horses together, you’ve got to get lucky and get a good trip, too.”

Going back to last fall, the connections of Calhoun and Allied Racing had another highly regarded member of this crop, Mr. Money, who went on to finish fourth in the Breeders’ Cup Juvenile.

“Everybody kept saying, ‘This horse might be better,’” the trainer said of My By Standards. “…And Mr. Money’s a pretty good horse. It took By My Standards a little longer to get there — a little longer than we thought it might take — but once he got there, he really moved forward.”

The lightbulb came on after the maiden win. Since then, traits such as “a great mind and athleticism” helped By My Standards handle quite the class hike. He quickly went from maiden special weight winner to Kentucky Derby contender with a 22-1 upset at Fair Grounds.

If all goes well over the next week-plus, By My Standards will mark the first Kentucky Derby starter for Calhoun, who has won more than 3,000 races and a pair of Breeders’ Cup events.

“It has been a long journey,” he said. “I’ve trained a lot of horses and been fortunate to win a lot of races — some big races. But there’s nothing like this. I’m very appreciative of being here, and I’ll just enjoy the ride.”

• In news of the day, Anothertwistafate will bypass waiting on a Kentucky Derby spot, with connections pointing him straight to the Preakness, which is already shaping up strong.

• Per Churchill Downs, check out news and notes on all Kentucky Derby contenders stabled under the Twin Spires, with Tuesday’s update including an update on Country House’s rider situation.

• It’s not easy to pick the Top 4 finishers, but it makes all the difference to approach your tickets with a refined strategy. Run down keys to cashing on the Kentucky Derby superfecta.

» Horse: By My Standards
» Race: Kentucky Derby (2019)
Horse Racing Nation's Kentucky Derby daily blog counts down to the May 4, 2019, race at Churchill Downs with a once-a-day update on all things Derby. Get the latest news and chatter, workout reports and a look at fields for upcoming preps all in once place.
• The full Derby Daily archive
• HRN's Derby contender rankings
• Derby points races and schedule
• HRN's Kentucky Derby Radar