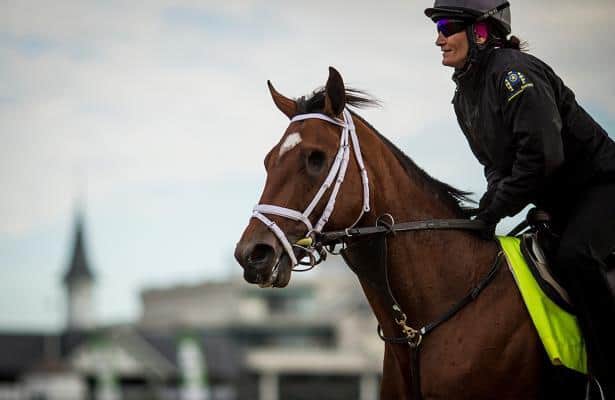 Trainer Todd Pletcher will be represented by a pair of runners as he seeks his third victory in Sunday's $100,000 Alydar Stakes at Saratoga.

Calumet Farm's homebred Patch, the bay Union Rags colt who became famous on the 2017 Triple Crown trail for his uncommonly cycloptic vision, will carry the banner from the Pletcher barn from the outside post 5 in the 1 1/8-mile race. The 4-year-old is exiting a lackluster seventh-place finish in the Grade 1 Stephen Foster Handicap on a very warm evening on June 16 at Churchill Downs.

"He's been good. I think he's training well. I think we'll draw a line through the Stephen Foster. For a lot of horses, it seemed like a tough night," said Pletcher, who has won two of the Alydar's five runnings with Vitoria Olimpica (2013) and Rally Cry (2017). "Hopefully, he'll rebound with a more Patch-like performance. With a couple races under his belt and a few good works, he should be rounding into form."

Prior to the Stephen Foster, Patch won his seasonal bow by a neck against allowance company in May. It was his first start since finishing fourth in the Grade 3 West Virginia Derby last August.

Installed as the 5-2 second choice on the morning line, Patch will be ridden by Luis Saez.

Repole Stable's Outplay will be looking to rebound from a well-beaten eighth-place finish in the 1 ½-mile Grade 2 Brooklyn on June 9 at Belmont Park - his first race beyond 1 1/8 miles. Outplay, by Bernardini, won the Curlin last summer in his only previous appearance at the Spa. He began his 4-year-old campaign with a 5 ½-length win in an optional-claimer in March and finished seventh in the Grade 2 Churchill Downs on Kentucky Derby Day prior to the Brooklyn.

"I think the mile and a half proved too far for him," said Pletcher. "He was successful here last year in the Curlin and hopefully getting him back to a mile and an eighth will be helpful."

Outplay, at 3-1 on the morning line, will be ridden by Hall of Famer John Velazquez from post 2.