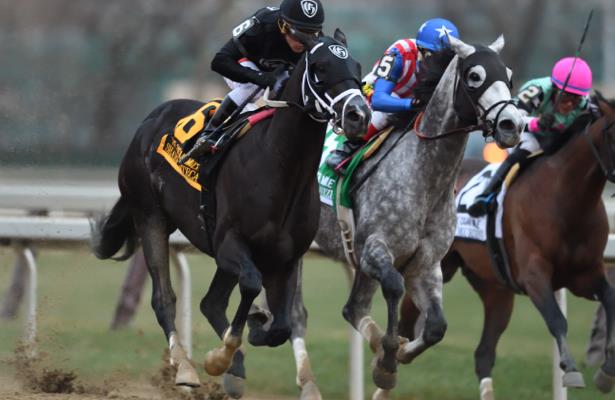 Who said horses coming from Breeders’ Cup races were dull next out?

Well, that sentiment couldn’t be more off when it comes to Sharp Azetca, who was, yes, plenty sharp when winning Saturday's Grade 1 Cigar Mile after his near miss in the Breeders’ Cup Dirt Mile.

With this win, Sharp Azteca now adds another grade one name to the roster of the ever-evolving Pegasus World Cup (GI), where will be looking to spoil the swan song of Breeders’ Cup Classic winner, Gun Runner. Trainer Jorge Navarro said the colt is "95 percent" certain to go in the Jan. 27 race at Gulfstream Park.

It was good to see the son of Freud come back in such fine fettle, especially when it earned him his first Grade 1 victory. Before this weekend, Sharp Azteca had competed in three races at that level, each time finishing second, and each time running a winning race only to get eclipsed by another horse’s Herculean effort.

Ironically, in the Cigar Mile, he even faced one of the horses, Mind Your Biscuits, who got the best of Sharp Azteca in the closing strides of last year's Grade 1 Malibu. That wasn't the case Saturday.

No longer speed-crazed, Sharp Azteca broke on top but switched off kindly to sit in third during the early stages. An argument can be made that it was that move that made the difference. When confronted by Mind Your Biscuits at the top of the stretch, Sharp Azteca was able to repel him with easy, coming home 5 ¼ lengths the better.

She may not have wowed anybody with her final time, but you couldn’t get much more visually impressive than the near four-length trouncing Wonder Gadot gave the field in the Demoiselle Stakes (G2).

After not getting the best of trips in the Breeders’ Cup Juvenile Fillies, Wonder Gadot showed us exactly how powerful she could be when she isn’t forced to check and alter course in the late stages of a race.

With yesterday’s win, it’s almost a given that she will be put on the path to the Kentucky Oaks, and with her sire’s reputation for siring star fillies, it would be best to not discount her based off the slow pace and final time of the Demoiselle.

She has a long way to go before she hits Songbird or Rachel Alexandra status, but she would not be the first Medaglia D’Oro filly to hit her best stride during her sophomore season.

Catholic Boy gets down and Derby?

Barbaro, Big Brown, and to a point, Animal Kingdom did it…. So why not Catholic Boy?

Going into the Remsen Stakes (G2), Catholic Boy had plenty of back class to call upon. The problem was it was all on turf, and there was no telling how he would handle the dirt.

Much to the surprise of some, and to the pleasure of his connections, Catholic Boy took dirt with gusto, running away to win by nearly five lengths.

Of course, many will be looking for Catholic Boy to win another stakes just as emphatically over better competition before they really put him up high on their Derby lists, but for now there is no reason to think the son of More Than Ready’s win was a fluke.

With a pedigree that has a lot of dirt class, along with a bottom side that has quite a bit of stamina, there is plenty of reason to believe Catholic Boy has the makings of a top Kentucky Derby prospect.

Post Breeders’ Cup, it is to the delight of many handicappers to bet against horses coming out of the championship races. The thought is that they are returning on too little rest, off too big an effort, and/or that they may not be ready to deliver their best after specifically targeting the Breeders’ Cup as their year-end goal.

But on Saturday, six horses exiting the Breeders’ Cup took to Aqueduct, in attempt to cap their seasons with a winning note, and not a one finished out of the top three.

Highway Star was the first to perform admirably, finishing second, just a length behind Indulgence in the Go For Wand Stakes (G3). Then came Wonder Gadot and Catholic Boy, both of whom were victims to trouble trips in their Breeders’ Cup Races, only to return with romping wins in the Demoiselle and Remsen, respectively.

The, last but most certainly not least, came Sharp Azteca. Second in the Breeders’ Cup Dirt Mile, Sharp Azteca saved his best for the Cigar Mile, and earned his first grade one win in the process.

What happened to the other two Breeders’ Cup returnees, Mind Your Biscuits and Practical Joke, you might ask? Well, they gave a pretty good accounting of their selves, finishing second and third behind Sharp Azteca.

All in all, not a bad weekend for those looking for one more race in 2017.