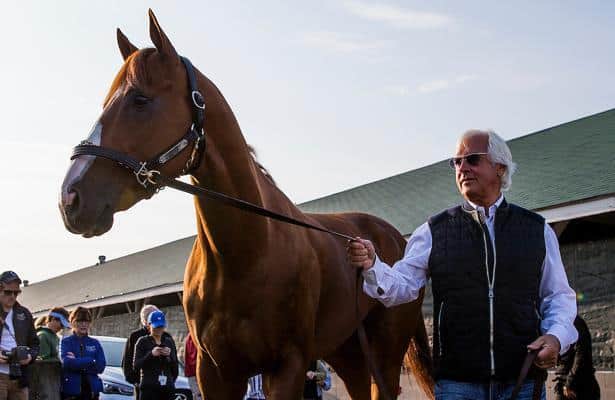 Since the late 1990s, Bob Baffert has commanded one of the largest arsenals of top horses in the United States. It seems he has a star for every division, and behind them a group of 2-year-olds awaiting their opportunities.

However, the assembly line-like success of his West Coast barn has not lessened the pressure the Hall of Fame trainer feels in his role.

“I just wish I could win it for all of my clients,” said Baffert of winning the Kentucky Derby. “I wish that I could win it every year for them, so they can feel the excitement of it.

“Making these decisions isn’t easy,” he added in a recent interview with Horse Racing Nation. “You have to do the right thing for the horse, but sometimes you make mistakes. There are decisions you wish you could take back.”

Baffert mentioned Point Given’s Derby and American Pharoah’s Travers Stakes defeat as two of the primary examples. There have also been Triple Crown near misses with Silver Charm (1997) and Real Quiet (1998) having won two of three legs.

In March of 2012, the stress caught up to Baffert in the form of a heart attack while overseas. He was there training The Factor and Game On Dude ahead of Dubai World Cup night.

“It’s definitely a tough job, trying to handle all those horses and schedules,” said Jockey Mike Smith, Baffert’s long-time friend and first call rider. “I wasn’t there with him that year, but after the heart attack, I think he learned to take care of himself a little more.

“Stress is a dangerous thing, since then he’s become so much easier to ride for. Not that he was bad to ride for, but I think he’d tell you himself, that he’s learned to handle the stress a lot better.”

“He’s so good with the fans,” Smith explained. “You see how he just takes them (American Phaorah and Justify) out and shares them with the fans. He just really enjoyed himself.

“I can’t say enough of how he handled himself this time,” Smith continued. “He was so cool about everything.”

“They all three ran dynamite,” said Smith. “I’ll Have Another was just running really well that year, and the other horse ran a heck of a race to beat us in the Belmont.

“After it all, I remember thinking that I really hoped that we’d get another shot like this again.”

Baffert called the 2012 Triple Crown “really disappointing.” He also feared it would be his last chance.

The colt went on to also win the Breeders’ Cup Classic, becoming the first to sweep what racing fans dubbed a “Grand Slam” of races.

“I used to joke that I had another one in me,” Baffert said “But after the Triple Crown I was asking myself what was I going to do next? Would I ever get another Triple Crown? I would have liked to, but you got to have the right kind of horse.”

Enter Justify, who it was announced Wednesday has retired after winning his six career starts in a span of 112 days.

The same could be said for their conditioner.

“I believe I’m a better trainer than I was before,” said Baffert. “You just learn from experience, and I would always think of what I could have done differently and make little mental notes for next time. Then I’d change it up a little bit.

Within the last two years, Baffert has also trained Pegasus and Dubai World Cup winner Arrogate, plus champions West Coast and Abel Tasman. He continues to check off boxes, some more than once, in a career that begs the question, is Bob Baffert the best of all time?

Smith, another Hall of Famer, said Justify sets Baffert apart from the rest.

“I’ve said this before: If Bob had never won a race before or after, the training job with Justify would put him in the Hall of Fame. It was that incredible,” said Mike Smith. “For him to do what he did with Justify, in such a short amount of time, facing some minor issues, like I said, is incredible.”

A third Triple Crown for one trainer would be unprecedented. Baffert appears ready to chase it with a deep group of juveniles, with horses from his barn making up 50 of 210 nominations for the upcoming Grade 1 Del Mar Futurity.

“He really knows how to get these horses ready for these races,” Smith said. “I wouldn’t be surprised if he won the Triple Crown again. It wouldn’t surprise me one bit.”